Ray Harryhausen Is the Father of us All 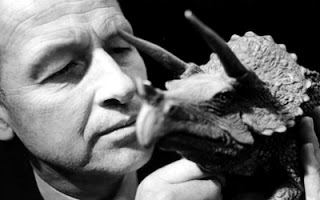 Ray Harryhausen passed away today at the age of 92. He was, in so many ways, the architect of everything that is great about fantasy movies. If you are a fan of any big, well-realized spectacle of a fantasy film from The Lord of the Rings on down, you owe a debt of gratitude to Ray Harryhausen and his movies, because he set the template, wrote the style sheet on how these movies would be filmed and executed. There isn't a special effects man in the world who hasn't heard of Harryhausen and in some way benefited from watching his work. But Ray was more than just a special effects man--arguably a pioneer in the field of stop motion photography--but he was also an incredible, talented, visionary artist who spent decades breathing life into the inanimate. He was a wizard, a sorcerer, and we have all lost something singular and profound with his passing.

Ray's inspiration for creating movie magic was seeing King Kong as a boy. He told the story often, as famous people who are asked the same questions constantly are wont to do.  It's a good story, and a charming one, but it doesn't really get across the sheer chutzpah of what he did next. He started doing his own stop-motion animation in his garage and when he had enough to show someone, he sought out Willis O'Brien, the man who created the stop-motion effects for King Kong. O'Brien hired Harryhausen as an assistant on the movie, Mighty Joe Young, where he wound up doing much of the work.

O'Brien taught Ray all that he knew, but it was Ray who took that knowledge and elevated stop motion to an art form. His ability to sketch and sculpt served him well as he created better articulated puppets to work with. But whereas O'Brien helped Ray with some technical pointers, it was Ray who began to give his sophisticated action figures individual personalities, specific body language, and emotional arcs. The fantastic creatures didn't just move, anymore; they acted. They came alive. Each one different, no two alike. The cyclops in The Seventh Voyage of Sindbad reacts with confusion when he encounters the sailors. Gwangi the Allosaur plays with its prey. The baboon prince in Sindbad and the Eye of the Tiger is both a monkey and a man in equal measure. Every Ray Harryhausen fan has their favorite creation. But no one disputes Ray's crowning achievement, his technical triumph, in Jason and the Argonauts. 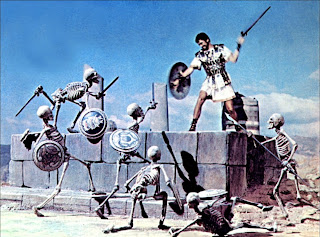 The film's climax has a skeleton horde rising out of the ground to destroy Jason and his crew. The scene is breathtaking in execution, and mind-boggling in its complexity. Ray was in charge of animating five or six skeletons at a time, and each of them had to move a certain way, in coordination with the actor's movements (filmed on location months before), and each of them constantly in motion. You have to think about what that entails:

Skeleton #6: Climbing onto platform.  Left leg is up, right leg bent and backward.Arms braced on platform at the elbows. Head forward, Mouth open in a scream. Starting to close.

Annnnd, click. That's one frame of film. Now, imagine having to do that for twenty-four frames of film. That's one second of the scene. But don't take my word for it. Watch the entire sequence for yourself.

Granted, you are spoiling the movie for yourself if you haven't seen it, but if you're reading this blog, I'm betting you have, and multiple times. I still smile and gasp when I watch this sequence. The little touches he put into the sequences, like the beheading, and the way the skeletons hover and wait for the sailor to fall before leaving him for another target. Again, there's that personality at work in everything Ray did. Some days were so intensive on this final scene that he was only able to capture three frames of film in one day. An eighth of a movie second. He did that for four and a half months, in a room, by himself, with no assistance from anyone else.

That's an artist at work, folks.

That scene alone is responsible for more people getting into stop-motion than anything else. Phil Tippett is an unapologetic fan of Ray's and Tippett did the stop motion effects on the Star Wars trilogy. If you thought the tauntauns were cool, Ray was their spiritual godfather. Later, when Jurassic Park was in development, Phil was brought in to work with the computer animators to help bridge the gap between stop-motion and computer animation.  Dave Allen and Jim Danforth were also Harryhausen disciples and they produced a lot of commercial work whenever Ray was locked in his room, working on the next movie. When Dinosaurs Ruled the Earth, Q, Caveman, Dragonslayer, and so many other (and some would say lesser) movies and TV shows (remember Land of the Lost?) were created by people who were inspired by Harryhausen. Here's a Volkswagon ad that Allen produced for TV starring a familiar face:

I got to meet Ray twice in my life. The first time was during one of the late, lamented Dallas Fantasy Fairs in the Late 1980s and early 1990s. Ray was a special guest and I was over the moon at getting to meet him. I'll never forget sitting in a jam-packed conference room with maybe a hundred other people waiting for his question and answer session. The moderator stood up and said, "Ray Harryhausen needs no introduction. Instead, here's a brief reminder of why we're all here today." The lights dimmed and then a montage of scenes from Ray's various films, all of them key scenes, all of them evoking gasps and cheers of recognition from the audience. Of course, the montage ended with the skeleton fight. Of course it did! And with that, the video ended, frozen on one of the scowling skeletons' faces. Everyone surged up and gave Ray a standing ovation to thunderous applause, and it was one of the first times I thought, "Okay, I'm not alone, here. Other people get this stuff, too!"

Years later, while working at BookPeople in Austin, I got my second chance. Ray had written a couple of books looking back on his career, with tons of artwork, sketches, behind the scenes photos and more. We were having a book signing for him at the Alamo Draft House, where Ray would introduce the movie that inspired him, King Kong, and then sign copies of his book. It was probably the best signing I ever worked on. King Kong and Ray Harryhausen. What could be better?

Even at his age, Ray was a trooper and gamely signed every book that showed up, along with some other oddities. I was again touched by the crowd; sure, there were some old timers there, but there were also a lot of young dads with their kids--and it was the kids who were there to see him. That's the power of those movies. That's the magic of Ray. And he was nice, gracious, charming, and personally thanked everyone who thanked him back. I'm so glad that Hollywood awarded him a lifetime achievement award while he was alive to appreciate it.

Now everything is computer-generated, and at its best, it's amazing, and I really believe that. But I think it's interesting to note that the most amazing stuff now is essentially modeling faces directly from human actors. There's a reason for this: modern special effects people--to an extent--don't have the skill set that Ray had. They don't take acting lessons to try and understand character motivation, or light and film their own sets, or do modeling in three dimensions. I'm not talking about the effects studios like ILM and Weta. They have, as a hive-mind, people who DO still do that, and do it well. I'm mostly talking about the guys who render for a living; sitting at a computer every day, working on whatever three or four second shot has hit their desk that morning, doesn't leave a lot of room for wondering what the dragon's motivation is. Modern filmmaking doesn't work that way. There's no room for artists, not when there's all of these shots to process. And so, we've lost a step.

In the passing of Ray Harryhausen, we've lost the man who took that first step.

Thank you, Ray, for the creativity, the artistry, for the hard work. Thanks for all of it.

I'm amazed we both picked the same lead picture. Actually, perhaps I shouldn't. I get you, Mark, 100%.

Wonderful tribute Mark. I think I may have to download Jason and the Argonauts and some Sinbad to watch with the boy.

Great post, Mark. It reminded me that my son is at the age he needs to start watching Harryhausen. Thanks.

Thanks, Guys. Those films were so cool. I saw some of them pre-Star Wars, and some of them post-Star Wars, and they all held me spellbound. I got to see Clash of the Titans actually IN a movie theater, and the Medusa sequence was mesmerizing. It made a fan out of my little brother and made my little sister cry. Awesome.

Enjoyed your post very much, Mark. My father was actually the one who put together the video montage you mentioned for the Dallas Fantasy Fair in 1991. I uploaded it here: http://www.youtube.com/watch?v=wlNXn-QmYLY&feature=youtu.be

I grew up on Ray's films and am privileged to have met him. Great to see so many other people who feel the same way...

Paul, thanks for uploading that montage! It's a great example of Ray's work!