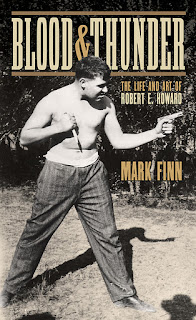 As someone who has now become somewhat inextricably tied to Robert E. Howard, the author from Texas who created Conan and so many other wonderful and engaging pulp stories, I feel like I should say something to mark the occasion of his birthday.

I've been involved in Howard Studies for a number of years and I frequently have to remind myself just how far REH (as we call him in print) has come as a popular culture figure. If you are wondering yourself what I'm talking about, go watch the REH mini-biography on the new Conan the Barbarian blu-ray. You'll probably watch it and go, "So? Yeah? Big deal. I know all of this stuff, Finn. What's your point?"

Then go watch the REH featurette on the FIRST Conan movie DVD, starring Schwarzenegger. Just compare the two and you'll see the differences, in shart contrast. You'll wonder why, for example, they let John Milius talk about Robert E. Howard as if he knew the man personally, when in fact he has had, and continues to not have, any ties to Howard or the Howard Studies community. He's just a ham hock of a director, flapping his big fat mouth, and getting it all wrong. 100% wrong.

That's not happening now. Paradox is maintaining Howard's image and biography, even as they continue to support the publishing effort. It's important to do both. There are millions of copies of the "Conan Saga," which is what we have come to call the 12-book paperback series that was put together by L. Sprague de Camp with the help of Lin Carter and Bjorn Nyborg. These books were the introduction to so many fans of REH, the character of Conan, and perhaps worst of all, de Camp's introductions regarding Howard from a biographical perspective. Oh, and of course, his assertion that there's no deep meaning to epic fantasy. It's all just good clean fun. Riiiiiiight.

Anyway, all of that junk is still out there. Those books get traded into Half-Price books and frequently don't last a week on the shelves before someone picks them up again. Gary Romeo, the greatest de Camp apologist of all, thinks it's funny that people like me keep bringing up de Camp. To be fair, he also complained that people weren't giving him enough credit when everyone was trying to freeze him out of the books. So, either way, he's going to kvetch.

But I want to be very clear here: the reason why I keep bringing him up is because I don't want people to forget what a horrible biographer de Camp was, and also what a petty little snark he could be whenever he talked about My Favorite Author. He never missed an opportunity whenever he had an audience to offer up a sideways kick or a backhanded compliment about Howard, usually a listing of all of Howard's faults as an author and as a human, followed with "but for all of that, he sure could write rousing action scenes, couldn't he?" This is the literary equivalent to telling your dance partner, "You know, for a fat chick, you sure don't sweat very much." It's damning with faint praise, and it has been the model for criticizing REH, well, ever since de Camp started doing it in the mid-1950s.

But that's changing now. The documentary on the new Conan dvd is huge. I know of at least two high profile anthologies coming out, one this year and one next year, with REH stories in them. It's only a matter of time before Howard becomes the next of the pulp-era authors to get folded into the American Literary Canon.It may take a few more years, and a few more people outside of the SF-F sub-culture to write favorable about him, but it's going to happen.

And there will always be a pop cultural, if not a cultural, presence for REH and his work. So the Conan movie didn't work out so good. Doesn't matter. Not really. The MMO is still going strong, and there's more and more publishing coming out. Another movie will get made. Hopefully closer to the source material. The message boards are active, and the fan base is healthy. As more and more of these fans discover or rediscover Howard's work, they are greeted with a very different picture of the author than merely "the brooding loner who wrote Conan."

I can't think of a better 106th* birthday present. Happy Birthday, Bob. Thanks for the words.

*Thanks to Damon over at the excellent Two-Gun Raconteur website for reminding me my count was off. It's 2012, not 2011, don't you know.
Posted by Mark Finn at 1:59 PM

You said it, Mark.

I was just pondering the Conan Saga myself: I've come across a few articles recently that were very clearly informed by them (not to mention the authors were of the right age group to have read them at a young age), and considering the massive success of the Lancers, it seems clear that we're still going to be cleaning up the mess. I'm still seething about Stewart Lee's show-and-tell.

Let's keep marching on the gates of the American Literary Canon!