For horror and sci-fi fans growing up in the 1980s, TV was the best place for a quick fix if you were looking for something ghoulish and ghastly to watch. In addition to Twilight Zone reruns (always on somewhere) and later, The Outer Limits, there were several syndicated shows that promised at least an entertaining story, if not a scary one. Now in the age of dvds and streaming content, you can get what you want when you want...well, mostly. There are a number of shows, smaller, more obscure, that have yet to find their way to a blu-ray near you.

It’s hard to talk about horror anthologies on television without mentioning The Twilight Zone (1959-1964). As a fledgling effort, The Twilight Zone is lionized, and perhaps a little too slavishly, for its innovative approach and subject matter. Keep in mind, however, that for every instance of, say, Richard Matheson writing “Nightmare at 10,000 Feet” there was an episode that was a gentle or whimsical fantasy with no horror or terror or freakout by William Shatner in it. A lot of the stories were informed by the politics of the Cold War, and some were outright science fiction think pieces. None of this is a criticism, mind you. It’s just to say that while the show was overall a hit, not every episode of The Twilight Zone was a home run.

Still, it was a place where you could catch Charles Beaumont, Richard Matheson, and Rod Serling writing and adapting stories that could, and would, put a chill on you in surprising and novel ways. John Collier, Jerome Bixby, Manly Wade Wellman, and others were handled with respect and their stories are some of the best, most famous in the history of the show. When The Twilight Zone was good, it was brilliant. And it unarguably set the template for shows of this type for the remainder of the 20th century. 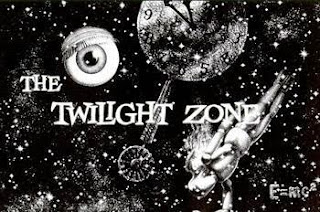 Serling was so instrumental to the series’ success that every single iteration of the show that followed it has attempted to invoke his ghost by inserting him into their credits in some way. It was cute, at first, to acknowledge the man upon whose bones these newcomers were treading for their traction. Then it became disturbing to me. I may well have been the only one, but there was something maybe a little too spectral about Serling’s presence. I don’t know if he approved of what went on afterward in the name of his most famous creation. I always felt like maybe he was trapped in the show, unable to pass through and go into the light; a ghost in his own machine.

When it comes to television shows like this, memory and perception are fickle and pernicious. What was terrifying to you may get a solid “eh” from me. When I was thinking about these shows, I approached it from the angle of consistency. How frequently did these shows deliver the goods? Granted, they all had great openings, but after that, then what?

Another factor for me was seeing a wide array of good to great horror stories adapted to the show’s format. They all did it, to one extent or another. Who was the best at it? See if you agree with my rankings. 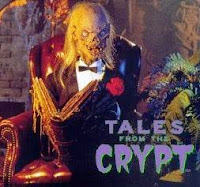 5. Tales From the Crypt (1989-1996)
HBO’s long-running series featured the animatronic Crypt Keeper as the old style horror host of yore, dressing in appropriate costumes and dropping awful pun after awful pun was a mainstay for the 1990s horror scene. This show is remarkable for a number of reasons: they were adapting comic book stories from the legendary EC comics line and validating those comics in a way that we hadn’t seen before or since; and this was backed up by the sheer number of top directors and actors and writers who hot-footed over to work on the series in some way; not just genre guys, but also a lot of people not normally associated with the horror genre.

Sure, the series as a whole was uneven, but they didn’t shy away from the gory and gruesome, and the spirit of the comics was preserved nicely in some really outlandish scripts. A few stories gave us genuine chills, to be sure, but there was nothing subtle about Tales from the Crypt. As a collection of filmed horror stories goes, however, there are few that can match it for overall quality.

4. Boris Karloff’s Thriller (1960-1962)
Already a legendary figure in pop culture, Karloff was one of the three most recognizable faces of horror in the 20th century, along with Bela Lugosi and Vincent Price. Karloff’s voice was as distinctive as his looks, and was frequently parodied and imitated for decades. Price had the longest career of the three, and the most varied, but Karloff stayed true to his roots and lent his name to books, comics, and a short-lived but influential television show, Boris Karloff’s Thriller.

Hosted by and frequently starring Karloff himself, he’d introduce each story and then we would be whisked away to some soundstage or location shot to establish the mood and we were off like a shot. No wasted space in the Thriller scripts. It was all Hit your Mark, Say your Line and move on. And the budget for things like special effects was probably $46 dollars an episode. So, the writers and producers and directors elected to write good scripts. Several episodes are based on short stories by noted authors. The most famous of the bunch is “Pigeons From Hell” by Robert E. Howard, and it remains one of the most faithful translations of Howard’s work to another medium. The episodes in Boris Karloff’s Thriller are consistently creepy and worth seeking out. 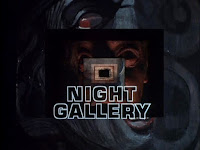 3. Night Gallery (1969-1973)
The premise: you’re in a museum, filled with fantastic and phantasmagorical paintings and statuary. As you walk through, admiring the art, with its strange and horrific subject matter, the curator appears and begins to tell you about the painting you’re looking at. It’s a curious story, if you’d like to hear it...

Rod Serling’s other great TV show is forever in the shadow of the mighty Twilight Zone, and that’s a shame, because some of the episodes of Night Gallery were way more scary by comparison. From the great, evocative opening sequence that would forever terrify my five year old self to some of the more interesting adaptations of famous authors from Robert Bloch to H.P. Lovecraft, Serling’s sensibilities were firmly in place, with less moralizing and life lessons and more freak outs and fear.  Probably the most famous episode is “Pickman’s Model,” and if you know anything about the story, you’d know it well could have been the inspiration for the series. 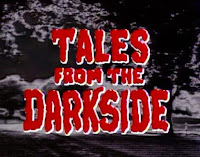 If reading that didn’t give you chills, then you never watched Tales From the Darkside late on a Friday or Saturday night and wondered if the front door was locked. This long-running syndicated series was around for the heyday of the horror renaissance in the 1980s and it was a needed, necessary thing, at that. What the hell else was there to watch in between Nightmare on Elm Street and Friday the 13th sequels?

Again borrowing from short fiction written by amazing authors, Tales From the Darkside dispensed with a horror host and went straight into the story after the creepy credits. No frills, all business. And when you had teleplays based on the works of Stephen King, Joseph Payne Brennan, Harlan Ellison, and Charles L. Grant, just to name a few, there wasn’t any need for a build-up. A lot of top names worked on the various episodes, from George A. Romero to Tom Savini and all points in between. In fact, the whole thing had Romero’s fingerprints on it as an executive producer, and many of the episodes filmed had his particular sensibility about them. The show took itself seriously, and very rarely ventured into comedy. If there was humor, it was dark, gallows humor. As a teenager in the 1980s, I’m certain this show is responsible for much of my cynicism and angst.

1. Masters of Horror (2005-2007)
Can there be any doubt as to this show’s place on the list? Granted it only lasted two seasons on Showtime, but each one was a polished gem, unlike so many of the other, earlier shows producing only diamonds in the rough.

On a cable network, there’s no need to censor the gore, violence or the occasional sex. You have a much larger budget to work with. Using top names in talent, like Don Coscarelli, Joe Dante, John Carpenter, and many others, you ensured good actors, great direction, and tons of experience. And to top it all off, every episode is one hour long. Tons of time to develop characters and plot without having to truncate the storytelling. It was genius and it worked like a charm.

Some of the best episodes were adaptations from famous short stories or comics. Joe Lansdale’s “Incident On and Off a Mountain Road", "H. P. Lovecraft's Dreams in the Witch-House" and  "Jenifer" by Bruce Jones (based on the comic story he wrote, illustrated by Berni Wrightson), are three stand-outs that spring instantly to mind. There are only a couple of duds in this otherwise stellar series, and even they weren’t that bad; they just suffered by comparison.

Very good list. While nowhere near as impactful or with the longevity of the bove, I'd like to mention Blighty's Hammer House of Horror, Tales of the Unexpected, & Nigel Kneale's Beasts as some fine examples of the TV horror anthology.