Lost In Space and Your Entertainment Dollar 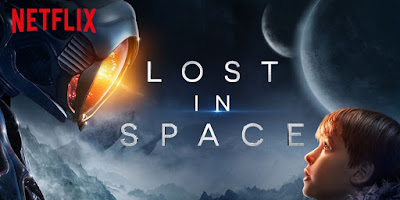 Oh, golly, the hand-wringing! The fretting! The derision and snark!

And then when it finally dropped, here came the reviews. I saw a lot of passing commentary on social media. About how it was well-done and the cast was great. How it was horribly done and everyone was out of character. How it was surprising and engaging. How it was deeply flawed with flat, hackneyed premises. How it broke down some barriers in a quiet and clever way. How the science was just so outrageously bad it was hard to pay attention. It was about about about about...

We are all talking about Lost in Space, right?


And this horrible, suck-ass movie, here?


But some of y'all have a problem with Netflix. Okay, whatever.

Look, I can't fix what I believe to be real and pervasive problems within the SF/F communities. I can't fix the myriad of dysfunctions that have plagued us for generations and even though the strictures that once shunted us off into a sub-culture have been largely removed by the whole of society, we all still feel that we need to be shoved into our locker--no, make that--we feel more comfortable back in our locker, like a prisoner who goes wire-happy or the monster in The Crate from Creepshow.

Instead, let's look at the platform. Netflix. Here's a quick overview with rough numbers. Y'all seem to like numbers, so here you go:

Deluxe Streaming Service costs $14 bucks a month. You get everything. But you can't watch it all. You have to sleep. So, let's assume that you get about 18 hours' worth of content on Netflix a day. That's pretty generous and assumes you're a shut-in with a colostomy bag. But it's possible.

18 hours times 30 days is 540 hours, total. Divide $14.00 across 540 hours and you are paying .025 cents an hour. Literally two and a half cents. Your ten hour binge of Lost in Space costs a whopping quarter. Two bits. A shave and a haircut by any other name would still seem so cheap. Even if you were somehow the only person in the world not using Netflix and you signed up just for this show, your cost would still be $1.40 per episode. You can't buy a comic book for that price.

So, what exactly was your problem, again? Yeah, that's what I kinda thought.

Look, if you want to say something interesting or thoughtful about the new Lost in Space, I'm all for that. But if you want to truck out the same old tired bucket of tar and feathers that you use for everything you don't like for fill-in-the-blank reason, do us all a favor and instead, drop a quarter in your piggy bank. Do it every time you'd like to kvetch about the media you're willingly consuming. At the end of the year, take those quarters and go buy yourself a nice dinner at your favorite restaurant and call it even. That way, you get something out of all of your personal discomfort, and I don't have to see the same thing written over and over again, ad nauseum.
Posted by Mark Finn at 11:51 AM

Email ThisBlogThis!Share to TwitterShare to FacebookShare to Pinterest
Labels: geek culture, Geek nation, media, Netflix, This is Why we Can't have Nice Things