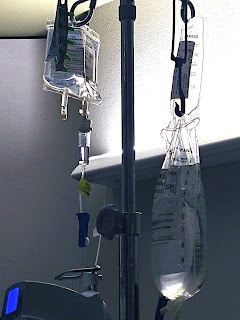 One of the things that they tell you look out for when you start taking chemotherapy is "flu-like symptoms." They are serious about it; emphatic. The doctors tell you. The nurses tell you. The guy making the sandwiches tells  you. "Hey...no screwing around, now. You get to feeling sick? You call in and let us know immediately."

And it makes perfect sense, right? I mean, after all, the chemotherapy messes with your immune system. Your white blood cells, etc. It's part of what makes the chemotherapy work, and also part of what everyone dreads about it. I've written before about some of the symptoms that Cathy has endured in these past six months, and while I've tried to be as whimsical about it as I can, it's still a problem, especially since Cathy has an ever-rotating palette of symptoms and side-effects that present themselves, at different times, dependent on where we are in her chemotherapy cycle. It's a lot like living with a werewolf.


However, the one thing Cathy had never picked up is any flu-like symptoms. That all changed on Friday, when she started coughing and her throat got really hot and scratchy. It was in the evening, so Cathy did the thing that we all do; she slept on it, to see if it would be better in the morning. It was not. In fact, it woke her up at about 2:30 unable to breathe. We wrestled that problem to the ground and I got her calmed down enough to pass back out.

She woke up a few hours later and we took her temperature. 101.2. That's a fever. Moreover, that was a flu-like symptom if I'd ever seen it. We called in to the on-call oncologist (say that five times fast!) and he told us to go to the emergency room and get blood work done. If her counts were good enough, he was going to prescribe her some antibiotics.

Seemed reasonable enough. We headed to the local hospital and went in through the emergency room, as instructed. Once they figured out why we came to them, and what the on-call oncologist wanted them to do, they got going with the basic stuff--weight, blood pressure, oxygen, etc. They put the oxygen thingie on her finger and flipped out.

The ER doctor put her on oxygen and ordered a chest X-ray. Her lung capacity was 65%. I'll skip past the parts of the story that looked like scenes from next week's episode of Gray's Anatomy and pick back up at the part where the other on-call doctor tells us, very kindly, that Cathy has pneumonia. He was very nice about it, and very calm, but I heard the word 'sepsis' and promptly lost my shit.

I couldn't show it, however. Cathy was already freaking out, and her temperature was at 103.5 at one point, and you know how you get into that zone where you just have to deal with what's in front of you like a robot? That was us. I cracked some jokes to keep everyone smiling, and kept nodding to Cathy and checking in with her. But I was beside myself.

Once Cathy was in the room and connected to the cluster of tubes and sacs that could well be a stand-in for some Eldritch Horror, and we were able to catch our breaths, I got the doctor back in the room and had him walk us through the whole process of Getting Pneumonia. "Forgive us," quipped Cathy, "It's our first pneumonia," and I thought, hey, way to steal my joke, but I let her have it because she was Miss Sicky McSick-Face. She got the laugh, though, so I'm proud of her for that.

Only then did the doctor tell us that we caught the pneumonia early, and she was only borderline septic, and her blood pressure was stable and not dropping, which was good, and her blood and vitals had already come up, which was good, and basically, we came in early enough that the treatment will be a routine thing and not a cause for emergency. Of course, they are still keeping her overnight in case something happens, the doctor said. Well sure, I told him. Just in case.

You have no idea (well, maybe some of you do) the thoughts that run through your head when you are dealing with something like this. I already feel helpless because I can't help Cathy by taking her cancer away, and now I'm surrendering my wife to a heart monitor and a saline drip. I've never felt more closed in, more at the bottom of a well, in my life.

I spent Saturday Night not sleeping a wink and holding my dog.

When I called first thing Sunday morning, I was told to get a pen and a piece of paper and then go to every room in the house, where she dictated to me what she needed from each room. As I pulled and honest-to-God suitcase full of requested items through the hospital, I was just happy (if slightly winded) that she was well enough to boss me around again.

The visit today was a flip of yesterday. Cathy was wide awake, and I kept falling asleep. She'd gotten some breathing treatments and bags of antibiotics. She had eaten, slept, and eaten again. She was awake, alert, and her voice was normal. She still had that rattling cough, but it was moving stuff around in a productive way. There was a hundred percent improvement over Saturday.

The good news is this: they are in front of her pneumonia. Assuming there are no surprises, it looks like Cathy will get to come home on Tuesday. I'll be on pins and needles until then. Maybe I will write some more before then. Hopefully I won't need to.
Posted by Mark Finn at 8:35 PM