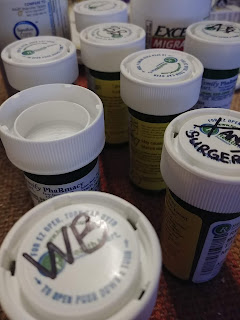 Warning: this post contains language that people may well find offensive, especially since we're talking about body parts that are considered naughty. Please don't read this if you are decent, church-going folk. The less you are exposed to stuff like this, the better.

I've been quiet after my surgery on December 31st, for a number of reasons. I'm uncomfortable--the surgeon pac-manned me open like Toshiro Mifune in a Kurasawa flick and then stapled it all shut again. This uncomfortable sensation has led to me needing to take pain killers, which make me sleepy, because I have zero tolerance for pharmaceuticals, and those pain killers put me right to sleep. So I'm not using my time very well. Mostly, when I'm awake, I have three things on my mind: peeing, pooping, and my two drain tubes, sewn in to either side of my groin. I've been telling people I'm in waste management, a la Tony Soprano, but that's not really what's bothering me.


We talked before about my panniculitis and how it infected the apron of fat below my stomach. This was doing all sorts of damage to me, causing swelling in the legs and ankles (offset by antibiotics, which I was taking for roughly half the year), blocking one of my lymph nodes, displacing my hips, and a bunch of other things, too. That's what the doctor removed; a 31-pound sac of poison that I'd been carrying around for years.

Not to get too metaphysical/touchy-feeling on you, but I think it's where I stored all of my depression, my anger and frustration, etc. It developed shortly after I moved to North Texas and over the intervening years it's gotten steadily worse. Now, it's gone. And the doctor who removed it had to do a tummy tuck in order to sew me back together again. Mind you, I'm still fat. I've got my stomach, and that's a lot to work on, but I have a solid plan. This surgery was done to prevent my further deterioration, damage to my lymph nodes, and to regain my mobility. Even in my sutured state, I feel lighter and find it easier to walk. This was a good thing.

Only, see, here's the deal: in order to remove the aforementioned bag of goo, they had to cut horizontally across my lower stomach. You know, awfully close to the...um...the, uh...well, down there. This has had a traumatic effect on...Little Mark...and he has swollen up in accordance to his concern. Not in any kind of good way. Currently, Thor's Hammer has come to reside in Hercules' Coin Purse, if you take my meaning. Apollo's Chariot is parked in the barn, is what I'm saying. And while it still functions, what was once a beautiful proton pack stream is now akin to putting your thumb over the garden hose.

I have not thought about my dick this much since I was fifteen years old.

To say that this is a distraction is the grossest form of understatement. It is incredibly hard to write, read, or think about anything when the Batmobile refuses to come out of the Batcave. Oh, and get this: people at the plastic surgeon's office have Zero Sympathy for this. Apparently, this is a common thing in their line of work. I was casually informed by the attendant that it might take up to six weeks to return to normal, and as long as I was able to urinate, this swelling/turtling combo was not a problem. Spoken like a woman who has never in her entire life wielded Excalibur in battle.

It's weird in that, I can almost handle the drainage tubes if that were all I was dealing with. But there's a real "insult to injury" component to having a pair of drainage tubes that nicely frame and accentuate your malformed and tumescent Mini-Me, dangling in front of my pants, to remind me every time I sit down or stand up, "Hey, you know what? Your junk looks like a par-boiled yam right now!" and every single voice in my head is whispering, "it'll never pop back into shape!"

Cathy, bless her heart, has been great. She's off of the oxygen now, and working on building up her stamina, which includes tending to me as needed. I am trying not to be a burden, but some days are harder than others (oh, shut up, you). But even she is only sympathetic up to a point. There's almost an unspoken vibe in the room of, "Well, now you know what it's like when we have problems with our ladybusiness," and I have seen it in the eyes of the nurses at the doctor's office, as well. The thing is, it's not a one-to-one trade off, here. There really is no comparison. There's no pain. There is only...a shift in focus.

I'm not in pain, so much as I'm in profound discomfort. Contrary to what every issue of Cosmopolitan says, men don't think about sex constantly. Men. Not boys. But men. And after a certain age (you decide what that number is), sex becomes a reaction, rather than an action. That is, you don't seek it out as some kind of biological imperative. If it's offered, why, sure, it beats playing Xbox. For the most part, D'artagnon's Rapier is content to just be where it is and hang out, provided you don't need to make any adjustments due to exercise or strenuous activity.

As of this moment, there is a piece of my consciousness wired directly to the Bullet Train, monitoring any change in the status. Any shift, every pressure point, phantom sensation, any changes whatsoever. In computing cycles, I'm using about half of my RAM to keep an eye on things downstairs. That's way too damn much RAM, okay? I have other computing needs. Numbers to crunch. Simulations to run. Memory to access. This aggression will not stand, man! It's a revolution up in this piece! Power to the people! We taking it to the streets! Tramps like us, Baby, we were born to Ruuuuuuuuuun...

I think I am going a little stir crazy.