Hey, Toxic Fans! Get Off My Lawn! 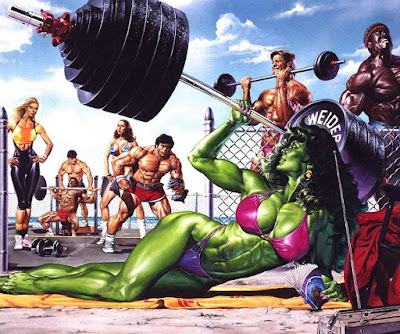 I've had it with these fair-weather Johnny-Come-Lately 4Chan Troglodytes and their mouth-breathing screeds that get slurped up by every nearly-news outlet and then sent back out into the aether to clog up my feed, pushing the puppy pics and the food selfies out of Facebook's algorithm. Knock it off, you assholes.

Of course, I'm speaking about the latest Teapot Tempest: the She-Hulk announcement that Disney made over the weekend. Oh, there was also an announcement about a Moon Knight show, but none of the Innsmouth-Tainted Stumblebums of Twitter are talking about that, nosireebob. It's all about the She-Hulk show, and how Disney is RUINING the world with its Feminist Agenda by turning the Hulk into a woman just to appease the Femi-nazis and the democrats, all of whom only want to kill babies and steal money from hard working Americans, and by the way, Trump rules and you suck, and oh yeah, Marvel isn't ever getting another penny from me. 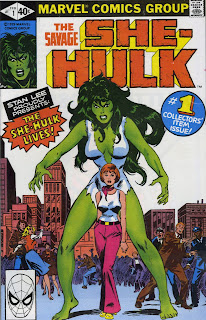 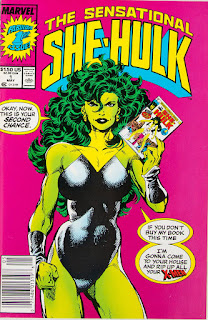 Briefly: She-Hulk came out in 1980. I know, because I bought the first issue. John Byrne stuck her in the Fantastic Four in the mid-1980s, and made her popular by giving her an outgoing personality with a dollop of snark. This turned into a second series, which was a critical hit, probably one of the best books Byrne ever did. She-Hulk then became an Avenger and has been a Top Second-Tier Marvel character ever since. Most of this happened in the mid-to-late 1980s and most of the 1990s. That would be the time in Comic Book history when the industry was mostly male. Which means that the audience for She-Hulk was dudes and boys and man-children. And Me. And folks like me.

Now, in 2019, we get an announcement about a show that NO ONE EVER thought we'd see, a deep cut from the Marvel Comics Stable of Characters, and a corner of the Internet--the social media equivalent of that back table at the bar where none of the waitresses want to go wait on the table of grinning idiots who are out drinking beer for the first time since turning 21--those guys, can't WAIT to get online and scream about the Doom that Came to Disney.

I've already told you why this is bullshit, but here's the reason why it's real bullshit: they want any excuse to repeat the talking points. Any excuse. And when the "media" picks up the story, it's like a soothing dollop of Noxzema on their sunburned souls. They live for that shit. Because for them, any attention, even negative attention, is still attention.

But I'm not the guy who likes to just complain about a problem. Here's what I want to to: We need to bring back Gatekeeping. No, I am not kidding. We let a bunch of people into our romper room in the 21st century, because there were all of these cool movies being made, and we were so busy being welcoming and trying not to run anyone off that we were not policing our own and now we have a troglodyte problem.

Starting this Wednesday, if you own a comic shop, or if you work at a comic shop, or if you go to a comic shop, I want you to start listening for these assholes. Keep a sharp eye out. Any time you find one in your store, shame them into leaving. Encourage them to go elsewhere. Strongly imply that they are not welcome there. Unless, of course, they are. Then at least everyone else will know where the chuckleheads are congregating. But I'm assuming it's not a store culture, but an Internet culture.

The reason why I want you to do this is because I have a theory: I don't think these assholes are buying comics at all. I don't think they set foot in a comic store. If they DO read comics, then they are not paying for them. But I don't even think they are reading them, to be honest. It's obvious, when you look at it: they don't know a single thing about comics, not even recent comics.

And if they aren't the target audience, then guess what? They are marginal. A demographic sliver. Not worth covering. Not worth listening to. And certainly not worth any more time. If it turns out that these people are, in fact, long-time Marvel readers, then we know that this is manufactured outrage, designed to either troll or muddy the waters, because if they are long-time readers (ha!) then they surely know better, at least factually, if nothing else.
Posted by Mark Finn at 2:37 PM

Email ThisBlogThis!Share to TwitterShare to FacebookShare to Pinterest
Labels: comic books, geek culture, MCU, media, This is Why we Can't have Nice Things, Twitter