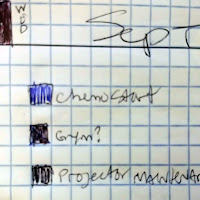 I met Cathy in 2000, which makes it easy to compute our anniversary and our wedding and all of those other days. Weirdly, in our relationship, I'm the one that tends to remember those things, so this works out great. Today is our 16th wedding anniversary, and I can't quite remember what the 16th year present is, but I'm going to call an audible and wish, instead, for a break from all of the crap Cathy's been dealing with.

This second brace of chemotherapy has been, in many ways, worse than the first round. Chief among them has been the nausea. Cathy didn't have severe nausea the first time around, not like this. Two weeks ago, I woke up to the sound of Cathy throwing up. It was horrible. I mean, any time you throw up, it's bad, but this was scary. I sat up with her the rest of the night, and every time she ran to the bathroom, I dutifully wetted some paper towels and waited for it to subside. It's a helpless feeling, to say the least.

We are also battling the new schedule, because it's a twice a month deal, but they have been calling her in for iron infusions and blood work. So, in effect, it's been more or less weekly anyway. We have tried five times to move the treatment days to Tuesdays, to no avail. The self-populating schedule making program that Texas Oncology uses will let you change one appointment date, but not all of them. Very frustrating, considering that I can do it was Google's calendar app and I'm not a medical facility.

We are trying to focus on the upside, which is this: Cathy gets a CT scan at the end of the month. They are looking now for any shrinkage, rather than waiting for six months. That means we'll know very soon if all of this horrible poison is working. If it's not, we get to try a different cocktail of chemicals. If it is working, however, we will soldier on through and get more anti-nausea meds and all of that fun stuff.

In the meantime, we are trying to live as best as we can. We have an evening planned for our anniversary, and I'm crossing my fingers that we'll get to go through with it.

Next week is my birthday. I'll be turning 50. I haven't decided if I'm going to write about it or not. But I know some of you like to do nice things for people, so if you want to do anything, you can either drop a few dollars into Cathy's GoFundMe account, or head over to Amazon.com and buy one of my books. My author page has all of the things currently available that I have stories or essays in, as well as things like Blood & Thunder: The Life and Art of Robert E. Howard, the Con-Dorks trilogy, and all of that other stuff. Recently some folks have re-discovered the Con-Dorks trilogy and have been saying nice things about the books.

That's it, really. I'm sorry the update is so short, and that it's not very funny. I just wanted to let folks know that we are still here.
Posted by Mark Finn at 11:50 AM

Best wishes for both Cathy on her treatment and you on your nameday. These things have a way of messing with you that cant be understood by those who havent been there, but I have.Call the practice manager and ask (politely) if she can change all your apps to Tuesday. There may be a technical reason why they cant but she can tell you why.

Mark- I'm hoping you are now well, at least, and better able to help Cathy deal with this.