Note, for those of you wanting more frequent, day-to-day updates, I'm writing a "proof of life" post every Friday on Facebook, if you're inclined to brave that particular wilderness. It's more chatty, and talks about movies and TV shows a bit more than on here at the moment. You can follow me on FB and get the notification when I post, and hopefully being on FB to read it won't send you into an apoplexy.

Tax Season normally fills people with dread and fear; not because everyone is secretly a white-collar criminal and living in fear that this year will be the one where the jig is suddenly up and that end up in federal prison; no, I think it’s just because most people don’t like to do math.

I don’t have a problem with paying taxes, per se. As soon as I figured out in my Economics class in high school that the taxes pay for stuff like roads, schools, national defense, yadda yadda yadda, I reasoned it was okay to expect us citizens to pay into the administrative costs of upkeep. I’ve only ever really groused about the exact percentages in each category.

What’s bothering me the most is having to go back through and relive my year, via purchases made, movies played, and that’s the trouble because I know exactly where I was from July to October and having to keep going over it again and again is a death of a thousand paper cuts. Cathy used to do this, the taxes. Oh, I’d help a little bit, with data entry and printing things out and looking at the uncategorized purchases to figure out what was what. But she did the heavy lifting. And when she got sick (well, sicker), pretty much the last thing on our minds was, “Now, don’t forget about the quarterly taxes. Here’s the password, and you’re going to want to...” I’d venture to say it was dead last at the bottom of the list of things we worried about.

So now I get to relive all of that.

I keep telling myself, “Next year, it’ll be better. Next year, you’ll have all of this back in place and you’ll know what to do.” I don’t doubt myself, but what I’m not saying aloud is that I don’t know if I’ll ever be able to think about tax time for the business without recalling this year and it’s relationship to 2020. It’s a mile marker I’ll have to keep driving by every time I go down this road. I can’t avoid it. I can only hope to speed by it fast enough to not really get a good look at it and then hope I don’t get stopped by something else. 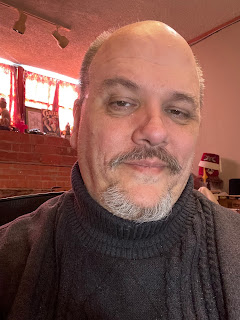 From wherever I was in the house, I’d reply, “It’s a Winter Hellscape.

Aaand...scene. This summed up the two of us and our usual temperaments rather nicely.

I’ve got the curtains open. I’m trying to see the snow the way Cathy saw it. Magical. Pure. Innocent. And instead, all I’m doing in my head is working out the logistics of taking the dog outside without slipping on the slicker-than-owl-shit Terrazzo tile outside the theater and seriously injuring myself. How would I tell anyone if I did take a fall? I’m got my phone on me, sure, but who do I call? I’ve not had to worry about being alone for twenty years. This feeling of forced helplessness is gnawing at me, and every day I have to stomp down my urge to scream and throw things. It usually works. Usually.

That’s the worst part, I think. Feeling alone when you haven’t been alone for so long. Most days, I get stuff done and as I’m doing it, I get real self-congratulatory, as if to say, “Look at me! I’m not backsliding into a cro-magnon existence! I’ve got a clean shirt on! There’s food I can eat! And I only have to check off these very elementary survival boxes until Cathy comes home...”

I’m still talking to her at dinner time. I walk around the house, having a conversation with myself, and everyone keeps telling me, “But Mark! That’s normal! You need to do that! It’s what you do to help get over such a loss!”

And every time they say something like that, all I can think about is, Oh yeah? Have you seen the movie Psycho?

When I get to thinking about this stuff, I find myself living in mortal fear of purchasing a Russian Mail-Order Bride. Or getting married again, to the first woman who asks me. Or taking on one or more roommates. At 51. Just to have someone else in the house. Just to be able to look over at someone who isn’t Sonya the pit bull and say, “Can you believe this fucking weather?”

They say it’ll take a while. They say you have to go through all seven stages of grief. I didn’t do that when my father died, and it really did a number on me—a number so big I’m having to eat nothing but cauliflower to deal with it. And so I’m trying to allow myself to do that now. Every day, I move a little bit further down that road, toward the next stage, like a one-horse town on the highway. I won’t know until I get there if I can blow through it, or if I need to stop and get gas, grab a shitty Allsup’s burrito to eat and go to the bathroom, or walk the dog and stretch my legs, and all of that other small town road tripping stuff you have to do.

Seven stages, like little Podunk towns. I have no way of knowing which town I just blew through. Or which one is next. They all look alike to me after a while. And if I’m not careful, the locals will kick my ass. Well, they can try.

Seven stages are kind of new agey bullshit. They don't happen bin any particular order at all, if they actually do happen. After Paula died I had a lost year that began with relief and crying sorrow at the same time, followed by massive horniness, a period of very realistic
hallucinations due to a massive overdose of lithium which led to me being hospitalized then too weeks in rehab during which I lost my ability to walk(but the hallucinations were really cool, seriously) before I was deposited home. Then I had a few months of simple loneliness before Karen phoned me one night. Those were my stages of grief, nothing at all like any list.
Did I have a point?
Oh well, The Leftovers is really good!

I have so many friends who are facing the same thing this year, and once again, you gave me insight into what they are going through. I realize someday this might be me, and I "run away, run away" from that thought the moment it enters my mind. Chicken? Yep. Not gonna lie there.

We all need friends, and although Facebook isn't a true portal to friendship, I am going to find you and follow you.