I love short stories, and I always have. As a reader, I love anthologies for one simple reason: more bang for the buck. Finding an anthology with short stories from authors I like is like finding little gems in the rock pile. Many times, I've bought an anthology full of stories I already had, simply for the one or two stories I didn't have. Especially if the other stories in the book were good. Then you know you're in for a treat. 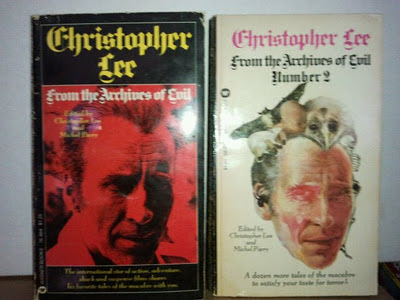 These two paperbacks were bought at the same time, but I cannot recall which used bookstore I found these in. Regardless, I was impressed with the contents, as well as Christopher Lee's cogent remarks about the authors and stories. It's pretty clear he at least contributed the commentary for the first book.

In honor of this year's Halloween, I broke the books out and worked my way through the stories. Check out the punch in these two slim volumes!

I haven't bothered to look and see if there is a From the Archives of Evil #3 or not. I've read most of these stories in other books, but the few I hadn't read before were all excellent.

It's Halloween. Go read something spooky!
Posted by Mark Finn at 5:27 PM