If You're Upset by the Kardashian Divorce, Then the Problem is YOU 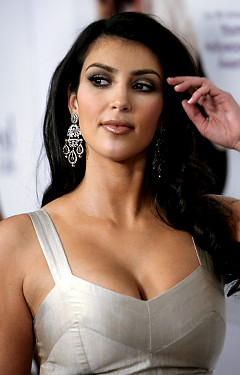 I've watched with wry amusement as the much-publicized Kardashian divorce has been co-opted by the Interwebs as a stick in the eye for the folks who argue for the sanctity of marriage being between a man and a woman. It's a conversation that the nation has needed to have for a while, and the politicized elements of that argument have little choice but to hunker down and take the body blows raining down on them right now. They have no defense for this.

Now that everything is televised, even the great and grand lie that is one of our most entrenched and enduring myths, that of a storybook romance, those that would claim that the people who can't legally marry are somehow cheapening the act for those who legally can is absurd. With the divorce rate at 50%, and with celebritiy's personal lives literally documented in closer detail than an average day in Congress, the message isn't so much mixed as it is garbled. If marriage is so bloody wonderful, how come no celebrity alive can keep one together for more than six months?

My short answer is this: we're oppressively conditioned by every romantic comedy, every romance novel, every story told to us by our mother and grandmother, every Barbie scenario, and now every single reality televsion show that's not on the Cooking Channel that marriage is the end of the story. It's the Taa-Daaah moment. And it may well be a great ending for a story, at that. It's the promise of a future in bliss, but also a closing ceremony, borne out of happiness at getting together, especially after all that's happened in the story.

Then, while America closes the book and picks up another story that will undoubtedly end the exact same way, those who got married have to figure out how to live together. Let me suggest to the shell-shocked teenagers of the world that ordinary people have a tough enough time of trying to figure out all of that stuff. If you put an entire television production crew in our living room and had producers try to steer everything you did in a certain direction, it's probably ten times more difficult.

Isn't it funny that all of the fans of people like, say, Sandra Bullock, and the media who labels her "America's Sweetheart," are waiting with baited breath to see and when she'll get married, when the reality is that one of the least-suited professions to the institutions of marriage is that of actors, celebrities, and other public figures. The reasons for this should be obvious. And yet, for the largest Christian religion in the world, the spiritual advisors whose job it is to council couples on love, marriage, and fidelity are actually forbidden to marry and have to take a vow of chastity. I've never understood that.

Studies have shown that people don't tend to engage their brains on new concepts and ideas when they can instead read, watch, and otherwise engage on concepts that reinforce their existing ideas. In other words, if you are a seventeen year old girl, and you've already got your wedding planned out, and you cannot WAIT for the NBA player of your choice to ask you for your hand in marriage, then you are not remotely interested in watching a documentary about the divorce rate. Or, if you do, you'll just think, "Well, that won't be ME. After all, I'll have a fairy tale romance. Those don't end in divorce."

Yeah, they do. Everything is susceptible to human frailty. If millions of dollars can't keep a functionally retarded NBA baskeball player and the world's hottest tulpa together for more than two and half months, then what chance does anyone have?

Honestly, if we would just turn off the reality television, the romance novel, and tune out the overwhelming pressure to not only get married, but as soon as possible, then maybe we'd have a better shot at it. Maybe then we could all talk about the realities of how to make a marriage work, and not focus so much on how much the wedding dress cost.

But I'm not done talking about the Kardashians yet. Nor any of their fans. More on this later.
Posted by Mark Finn at 2:54 PM