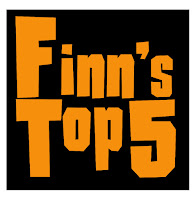 Kaiju is one of those terms that has been around for years, used primarily for fans of Japanese pop culture to sound smarter than the rest of us when they wanted to talk about big honking monsters. Unfortunately, thanks to three decades’ worth of importing their TV to jaded American audiences, “kaiju” has entered the pop culture lexicon. It’s a word of Japanese origin, that, loosely translated, means “big honking monsters.” Way to move the discussion forward, folks.

Specifically, the term as it applies to movies is considered a genre, though what monsters are considered kaiju are hotly debated. For the purposes of our discussion, I’m going to break it down like this: King Kong (1933) is not a kaiju movie. King Kong vs Godzilla (1962) is. Simple, right? Also, I’m going to give it my best effort to pick the scariest kaiju movies I can, knowing full well that these movies aren’t anything like what’s on the other Top 5 lists. However, I am a Monster Kid, so neener-neener, we’re doing this anyway.

5. Dogora the Space Monster (1964)
This is easily one of the nuttiest Japanese movies of all time, and certainly a bizarre entry into the Kaiju category, but bear with me. A bunch of satellites in orbit crash into some space protoplasm and the radioactive fallout results in a mutated tentacled gelatinous creature that eats diamonds, pisses off wasps, and acts as a kind of foil for a gang of diamond thieves.

You have to trust me on this; it’s weird, but it’s also a strangely compelling movie, made all the more unusual by the hanging space tendrils that keep picking up cars and dropping giant carbonized meteors on people. The effects are sparse but very creepy, and the glimpses of the space monster in question bring a lot of Lovecraftian terrors to mind. This isn’t just a one-off for Toho Studios; it’s out there where the busses don’t run, Jack.

4. Godzilla vs. Biollante (1989)
After a slew of increasingly silly Kaiju movies where the monsters were little more than rubber-suited wrestlers, bouncing on trampolines and crashing into balsa wood buildings, there was the first real effort to turn the venerable Godzilla name around. No, not Godzilla: 1984, that was terrible. Dr. Pepper product placement? What kind of nonsense is that? If you’re going to watch the rebirth of the Godzilla franchise, you gotta get the original version in Japanese. No Dr. Pepper ads. But I digress.

I’m talking about Godzilla vs. Biollante, a late 1980s movie with a great premise and even a couple of chilling moments imbedded between the undercranked destruction. Scientists have been studying the last time Godzilla appeared in 1984, attempting to merge Big G’s cells with plants to create a a substitute for fossil fuels. Thanks to a lab accident, this actually creates the Pottsylvania Creeper from Rocky and Bullwinkle. Meanwhile, a bunch of gifted and talented children all start having the same dream about a big ass irradiated lizard coming up out of the ocean…

This is one of the darkest and also one of the creepiest movies in the Godzilla franchise, a fantastic mix of scientists playing with fire, anti-nuclear sentiment, and really interesting monsters, in particular Biollante, which deliberately and dramatically breaks from the “guy in a bipedal suit” model. As long you can follow along with the set-up, the movie is great fun and almost—almost—a date flick.

3. Cloverfield (2008)
You might not want to call this a Kaiju film, but the Cloverfield monster qualifies if only in size and temperament. In the absence of a clear biological event, we are left wondering where the monster came from, but subsequent movies have now filled in some of the gaps. Cloverfield features one of the last gasp iterations of the “found footage” trope; the set-up opens on a group of friends at a farewell party, celebrating, only to have them end up trapped in the city when a giant space monster hits town—literally—and starts stepping on a bunch of people.

This is another film where the monster is a stand-in for the forces of nature as the people run and run and can never quite get free of this lumbering, capricious entity. The found footage manages to add to the suspense and helps sell the idea that these people are genuinely about to be killed by a big honking monster.

The Cloverfield monster itself is pretty impressive, too, as it lumbers through the narrow streets, at times disappearing behind the massive skyscrapers until it hits an open patch of night sky and then, Whoa, look out, it’s freaky as hell. This idea of hiding amongst the buildings was used, terribly, in the Roland Emmerich and Dean Devlin travesty that was their 1999 attempted homicide titled Godzilla, wherein they tried their best to kill a venerable and beloved franchise. In Cloverfield, the idea is reclaimed and works much better, thanks very much. If you missed this in the theater, give it a shot on DVD.

2. Them! (1954)
Them! has the distinction of being one of the first “radiation-makes-things-bigger” movies and the first Giant Insect movie and I have to say, they got this one more right than not, and nothing that came along after it was quite as good. The plot is pretty basic: early atomic testing was done in New Mexico. Those tests resulted in irradiating a colony of giant ants in the desert. Mayhem ensues.

Why does this one work so well? For starters, director Gordon Douglas knew the first rule of monster movies—don’t show the monster until you absolutely have to. Instead, play this creepy, high-pitched squeal every time they are nearby, and have a shell-shocked little girl say “THEM!” in a horror-choked voice when asked to describe the monsters. Really effective stuff.

Of course, once the monsters do show up, it’s giant prop ants on wheels. Sigh. But the build-up is still very effective and the movie is quite entertaining in the way you think it ought to be: Serious with a side of schlock.

1.Godzilla (1954)
Before Kaiju movies were a codified thing, and while the genre was flailing around trying to define itself, there was the first, original Godzilla movie, a film that personifies the wrath of a planet scarred by radioactive bombs and testing; our own technology revisited upon us in the form of a mutated dinosaur that wantonly destroys without conscience or consequences.

The fledgling effort, even with American actors inserted, is a sobering denouncement of the bombing of Nagasaki and Hiroshima. There’s no guesswork, no subtlety to the message of the movie; it clearly spells out, “This is happening because we played God.” The anti-science message is crystal clear, here, and you can slap a mad science label on this movie quite easily.

The suit and the miniature work is good in the movie, and Godzilla moves in darkness for several scenes, which adds to the believability. Of course, we get to see all of the old standbys, such as the atomic breath, but in this movie, it was the first time for everyone. Still an effective film, very different in tone from the Godzilla movies most of us grew up with.

It's strange how many Kaiju films aren't considered "horror" despite the cataclysmic loss of life & sheer volume of screaming citizens. After the insufferable first 10 minutes of Cloverfield, I really liked the grounded perspective it offered, & showed how terrifying it would be in the middle of an All Out Monster Attack. The original Godzilla still holds up due to the human element.

To that end, I'd include Shin Godzilla on the list, as not only is Godzilla more frightening visually, but the implications at the end are existentially terrifying based on what you think the "things" on the end of his tail actually are.

I'd also like to give a bit of love to Britain's own Gorgo, which I maintain is a lot better than most Godzilla imitators.