The Last Word About my Tumescent Scrotum 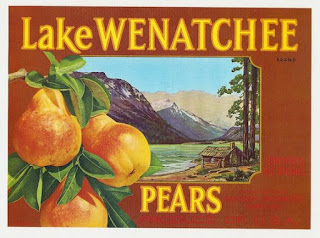 I know, I know, how many times on the Internet have we seen this promise made, only to be broken the very next day? But in my case, I assure you, it's true; this is my final post about the scrotal edema that has besieged my nether regions these past four and a half weeks, with no relief in sight anytime soon.  It's just not healing up as quickly as I'd like. Everyone keeps telling me to be patient, and on one hand, I hear them, and I'm trying. On the other hand, "AAAAARGH! MY DICK IS A GRAPEFRUIT!"

So, you can see my problem.

Read on, if you dare. Or, if you think this will embarrass you, please don't. You have been warned.
Full disclosure, here: speaking strictly from an aesthetic perspective, I have a beautiful penis. Oh, I know, everyone SAYS that their penis is beautiful when it's clearly not, but in this case, it's empirically true. I can prove it with math. There is a kind of Platonic ideal at work, here. And I am not mentioning this to be creepy or set an unrealistic expectation, here; we're all adults. I'm just saying, on a scale of 1 to 10, my penis is easily a seven, maybe even a seven-point-five. With beer goggles on? An eight, no problem.

Only, right now, it's not. It's freaking horrifying, man. There isn't a body part in the world that's supposed to look like what my junk currently looks like, okay? This scrotal edema nonsense has gone on long enough. A full month of discomfort, pain, and peeing at a forty-five degree forward crouch is is plenty of time to reflect on my life choices that got me here. I'm ready to move on, The Universe. 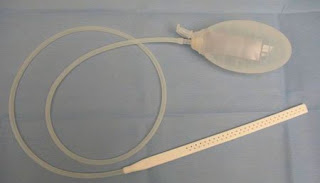 The problem is all of this lymphatic fluid that was built up in my body. I've got a J-P Drain (short for Jackson-Pratt), and it's dutifully moving the grossness out of me. For those of you who don't know how this works, it's a suction pump that's inserted into wound sites to whisk fluids and nastiness away to allow internal tissues to heal. My drain is sewn into my groin, and it doesn't hurt at all. It's just uncomfortable having to deal with it. I've got to empty the bulb out two to three times a day, whenever it fills up. This involves opening the drain and squeezing the horribleness into a measuring cup, and that number is then recorded for posterity. We're looking for 30 milliliters or less in a 24-hour period. It was over a hundred. Now it's around sixty. Gradual improvement. Aces.

This bulb is safety-pinned to my shirt, over the outside of my track pants, so it can do its job. But it's putting a real strain on the relationship between me and my dog. You see, that plastic bulb on the end of the hose, currently sticking out of my pants and pinned to my shirt at the waist, looks exactly like the plastic squeakers that Sonya pulls out of her cheap-o chew toys and masticates to a cracked and shredded pulp. 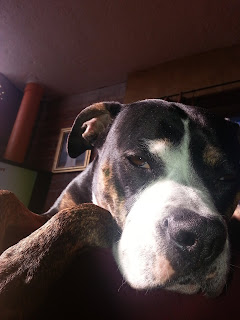 For the past month now, my dog has been giving me the hairy eyeball. She wants that drain, hanging right at nose height. She can sense that it's not for her, and that makes the forbidden fruit all the more sweeter. I walked out of the bathroom this morning, and she looked right at me as if to say, "So, we're still not going to talk about this? I'm just supposed to pretend like I don't see it, right? Is that your position, here? Nothing for me to see?"

I also try to keep the drain covered, or as out of sight as possible, because sometimes, the drain collects...how should I say this? Let's call it solid tissue. I don't know how it gets up the tiny little tube, or into the bulb, but squeezing it out into the sample cup is a bit traumatic. The first time I felt the bulb catch and then spit this lump out into the cup, I panicked. And you would've, too! This glob goes shooting into the cup like the most traumatic loogie ever, and I think, what the hell was that, is that something I'm going to need later, oh shit, is that a gonad? What the fuck?

Turns out, it's just part of the whole drainage situation. "The suction will pull all kinds of stuff out of the wound, some of it pretty large," she chuckled. "It's normal."

The hell it is, lady. I've got a chew toy, tethered to my groin, with aquarium tubing and sutures, and pinned to my T-shirt like winter mittens. It's the opposite of 'normal.'  Thirty plus years of thinking with the little head, and now I'm watching my vestigial brain disintegrate, one drain-evacuation at a time. Maybe that's just the hydrocodone talking.

Again, the doctor and nurses have been wonderful, but also emphatically unconcerned with my decorative gourd problem. All I can say for certain is, it seems that the number of nurses needed to "treat my wound" increases with each successive visit. This past Friday, I had no fewer than three beautiful women, staring at my blown-up undercarriage like Pudge Rodriguez waiting for the deuce from Kenny Rogers.

In my mid-twenties, this would have been the greatest day of my life. Pushing fifty, with a clingy dog and a wife, there isn't a way to make this situation any less sexy, and more humiliating. Well, humiliating is a strong word, and it implies that I am able to BE embarrassed. I'm not, not really; I'm only sad that these people are dealing with "Befores." Never any "Afters." Other people get to see the "Afters" but never the nurses who got them there. It's got to be a little frustrating.

On the other hand, they get to play with boobs all day, so, you know what? Enjoy the view, ladies.

About halfway through the removal of the rest of my staples, the head nurse said, "I'm sorry, where are my manners! Mark, this is so-and-so, she's our new nurse."

From the table, naked and frog-legged open, with ten thousand lumens of medical lighting spilling over my apoplectic bread basket, I said, "Hello, so-and-so, I'm Mark, and this is my tortured junk."

Oh, how they laughed. I tried explaining to them, because I was quite sick of their shit at this point, about my ordinarily-gorgeous appendage, and Nurse So-And-So interrupted my bit to say. "I'm sorry, but there's no such thing as an attractive penis." More laughter from all assembled. I see the head nurse got to you, as well.

I've got a plan cooking. The swelling IS abating, slowly. It's probably going to take another two weeks or more, at the very least. But it will eventually return to normal. And when it does, I'm going to make a bonus appointment, and I'm going to show those nurses what normal human junk looks like, and then they'll see! Ha! ...Okay, I just re-read that and I realize what that sounds like. Maybe instead I'll just send a pictu--nope, I caught that one in time. Dammit. I'll just have to settle for being happy and feeling normal and getting on with my bloody life once more.

If we time this right, Cathy will be ready to start moving around, post-surgery, and we can start our daily walking routine. She'll have her hair back, and I'll have my old friend back. Is this a storybook romance, or what? It's like something from a fairy tale. It sure beats what I've been living with for the month of January.

Dude, you are loved. Every gooey lumpy swollen bit of you.

Bryan and I had this conversation a couple of days ago. Me: There's no such thing as an attractive penis. Bryan: Except mine, you mean! Me: Yes, dear. :)