A Valentine's Day Update, and a Top Ten List

Let's get to the good stuff first; Cathy is home, and resting. Surgery went very well, better than expected. They did a full hysterectomy, which is standard procedure for ovarian cancer, and that went by the book. When the doctor starting looking at the scans to "de-bulk the tumors" (which is fancy medical-speak for 'cut those suckers out') he found only scar tissue, which he described as a gritty-textured thing.

No tumors to cut out.

He biopsied all of the areas, and we'll get those results in two weeks, but the upshot was this: the surgery was way less invasive, since there was nothing for him to "de-bulk." All of that extra chemotherapy did the trick, it would seem.

We know there will be some follow up chemo, and it'll likely depend on how the biopsies turn out as to how much chemo there will be. No more than three rounds. We're hoping it's less.

That follow-up chemo will be the last of Cathy's treatment for Ovarian Cancer, Stage 3. After that, it's routine check-ups every six months, for a minimum of five years. We should probably be getting bi-annual check-ups anyway, so no big deal, more or less. My mood is cautiously optimistic, until we get those test results back and figure out how much more chemo Cathy will need. It ain't over 'til it's over.

I'd be lying if I said I didn't cry with relief when the doctor told me about the tumors turning into scar tissue. I couldn't believe it; for once on the balance sheet, it looked like everything Cathy had been through--the blood clot, the surgical delays, the extra rounds of chemo--it seemed as though everything balanced out in the end.

I may well be jinxing it, but I know there's one more shoe yet to drop. That's in the future. Right now, the plan is simple: rest and heal. She needs to heal and I need to heal. And speaking of that...

I know, I know, I said last time that it would be my final post about the ol' scrotal edema. However, new information has come to light. Specifically, the light of the full length mirror in the hotel room.

You see, prior to last week, my relationship to my junk was not unlike that of three blind men describing an elephant--you know, each of them is touching a different part of the animal, and based on their limited input, describe three very different animals. Well, in my case, I was three blind men touching my hoo-ha. I could see it, peripherally, when I was laying down, and I could feel it (boy, could I ever!) when I walked, sat, or drove. And I could sense it when I used the bathroom. I had a tactile picture, but not an optical picture.

That changed when I got out of the shower last Wednesday. I rounded the corner heading for pants, and that's when I saw it. I stopped and stared...just stared. And it stared right back at me, with binocular vision, like an apex predator. I had not seen it--truly seen it--until now.

Two thoughts hit me in the brain pan at the same time.

Thought number 1: "Well, now I know why the nurses were all so damn amused."

And Thought number 2: "My God...it looks like..." and my writer's brain took over. Perhaps as a defense mechanism. I had to make sense of what I was seeing, and I've always done that with words. I waddled to the desk, took out my notebook, and filled a page with "what it looks like" until I could do no more. Over the next few days, as new ones occurred to me, I would write them down, as well.

But for those of you who have tittered, guffawed, and even chuckled at the saga of my Hindenbergian Tallywhacker, then this list is humbly and respectfully dedicated to you. 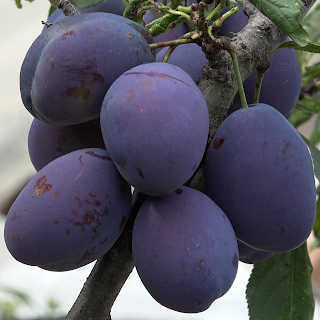 The Top Ten Things My Scrotal Edema Looks Like


10. It looks like a bundle of plums, held together with rubber bands.

9. It looks like an acorn squash with a whale spiracle attached.

6. It looks like at any second, it’s going to hatch and a baby roc will come tumbling out to menace Sindbad the Sailor.

5. It looks like a blowfish that died from eating blowfish.

Glad to hear the good news. I'll continue to pray for healing while thanking God for the healing He's given so far.

Has anyone said anything yet about estrogen blockers? My Kathy started them a couple of weeks ago. They also gave her something for the hot flashes. (I was enjoying the hot flashes. We weren't arguing over where to set the thermostat, and the house was comfortable.) I mention this because my wife started taking estrogen after her hysterectomy, and that's what the oncologist is blaming her breast cancer on. Something to keep in mind.

Anyway, thanks for passing on the good news. You two have been on my mind this last week. It's good to hear things are looking up.

OMG - "No tumors to cut out." That just may be the best five words in history. Thank God and God bless!

You just made me laugh out loud in a serious training with Michelle. So glad to hear about Kathy. Loving and healing thoughts to you both.

Great news all around! Well, except for the Davey Crocket ammo pouch you're sporting.