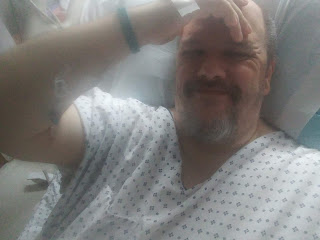 
There is always a chance of infection with something like this, and more so in my case where the result of the surgery creates a space in my pelvic cavity that resembles Carlsbad Caverns on a CT scan. My surgical area had been draining nicely, until my drain came loose. To avoid infection, the doctor removed it entirely and I spent the next two days treating the resultant hole in my groin until it closed up.

Apparently, Carlsbad Caverns didn't think too much of that idea, because five days later, it tried to kill me. I woke up with stabbing pains in my guts, and figured out pretty quickly that I had a build-up of fluid from that stuff not being able to drain. However, my doctor needed to confirm that diagnosis, so I went to the hospital for a sonogram, for the purpose of looking to see if there was fluid in the cavity. If there was, I was going straight to radiology (for some reason) and I would be fitted with a new drain. This would take care of everything. It was a solid plan. And, as the doctor wanded my abdomen and said, "Yep, there's a pocket of fluid in there," I thought, cool, no more stabbing pain. Back to draining. Buh-Bye, Scrotal edema, see you later, sucka...

I got up off of the table and that hole in my groin I'd been tending to opened up, and pus came running out and down my leg. It was the grossest thing ever. You cannot imagine. And the smell was unlike any other biological smell I'd ever experienced before, and I've been to Washington, D.C. It smelled like rancid onion soup.

Something about horrible pus cascading down my leg changed my admittance from radiology to the emergency room. I know, weird, right? They immediately set to the task of figuring out what my deal was, and trying to stabilize and admit me, in that order. Here's where the problems began.

Before going to the hospital, I knew with 100% certainty that I would be getting a drain installed, so I dutifully didn't eat or drink anything after Midnight the night before. Now that I was in the emergency room, they were trying to draw blood from my arm and not having good results, because it was noon and I was really thirsty and fatigued. I needed water, and also some food.  And here's something interesting that I didn't know: when you start to dehydrate, the veins in your arms go deep and your body makes it harder for you to lose fluids--like blood.

Five different nurses tried to stick me about twelve times. They needed two cultures for tests, and they only got one. Eventually, they gave up, ran an IV, and started me on saline. I also got water and was allowed to eat. Within an hour, I was feeling much better. They came and took a culture of that stuff that was coming out of me. That seemed a lot more direct to me, since that was the one bodily fluid I was giving freely. Did I mention it was gross and smelly? Tears-in-my-eyes smelly. You have no idea.

There was a really good reason for testing my blood. To make a long story short, they were looking for a bacterial infection and trying to figure out if it had moved to other parts of my body. Also, they were worried that I might be septic. Both cases turned out to be false, thankfully. But I cooled my jets for several days while they figured out what to do with me, and also to wait for the test results to come back. In the meantime, I was given lots of really strong antibiotics, got two more IV's placed before they decided to run a PICC line instead, got the new drain I'd been hoping for, and tried not to claw my eyes out from waiting and waiting and waiting some more.

Not one of the doctors I saw, five in all, ever really told me what was wrong with me; just that it was a bacterial infection that arose from the wound site taking longer to heal than expected. All five of them had a different idea about what to treat me for, and how to go about it.  Only on the day that I was getting out did anyone tell me that it was, in fact, Streptococcus constellatus, and there was something else in there, as well, that, had it not exploded out of me when it did, could have sent me into toxic shock. I might have lost my right leg. Or worse.

The more I think about it, the more freaked out I become.

There's a thing called aversion therapy where you immerse yourself in the thing that scares you. In my case, I've never liked needles, so much so that I'd rather have a panic attack and faint than face them. It's made life interesting for me over the years, but it all goes back to being hospitalized at the age of four for a tonsillectomy and never quite recovering. In the past, I've had to be drugged before I could be drugged. Talk about insanity.

Only, now that I have a semi-permanent IV line running out of me, and having survived all of the attempts to draw blood, I'm suddenly not as bothered by needles as I once was. Mind you, I still don't like them, but I have stopped having panic attacks and cold sweats and dizziness whenever someone comes to draw blood. I will never be okay with it, but the fear no longer controls me.

Was that free therapy lesson worth six days in the hospital? I can't say.  Aside from wanting to chew off my leg to escape the coyote trap, I felt fine, when they weren't trying to leech me or wake me up in the middle of the night to check my vitals. The um, the drainage, stopped after two days. It was gross and bad on Tuesday and Wednesday, but by Thursday, all was, well, it wasn't well, but it was certainly better. They put me on killer antibiotics, and they even gave me a Xanax while they were trying to run new IV lines.

I will talk more about this later, when it's funny to me. I've made some notes. But right now, I'm glad to be out and glad to be still walking around. I've got a month of recovery to get through, and then--HOPEFULLY--I will be done with all of it. I know I'm not supposed to plan things because life has a way of walking all over my expectations, but I would love it if just once this year I don't have a personal setback relating to my health. Just once. Please.

One final note: Cathy's GoFundMe page has officially become our communal GoFundMe page, as I will be on the hook for thousands of dollars after my forced vacation at the hospital. I'm really sorry to have to ask, especially since so many of you have donated, but for those of you that haven't and can spare just $10, it would mean a lot to both of us. At this rate, I'm sending the wedding comic pdf out to everyone who gives anything. Just follow this link. Thank you.

Damn! It sounds like you dodged a couple of bullets, here.