The Aurora Colorado Shooting and My Thoughts On It 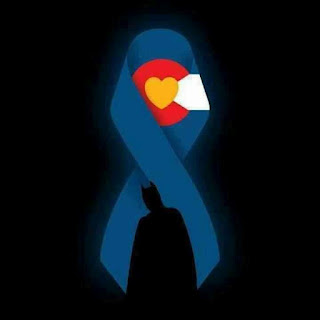 I don't need to tell anyone what a horrific and senseless act this was. I was shocked to hear it, and the scant facts that have emerged in the past forty-eight hours have done nothing to make me feel any less betrayed, upset, and strangely violated by what happened.

I'm just sick that this took place in a movie theater. Not because I own a movie theater myself (well, okay, a little bit, yeah), but because it feels like someone has desecrated one of the last sacred spaces left to us. One of the only places where we can let our guards down and dream and push the world and all of its lunacy aside for a couple of hours.

Hot on the heels of this have come the 24-hour new cycle's ubiquitous and likewise ridiculous speculation that violent movies, video games, black trenchcoats, and red hair dye were somehow the cause of this kid's actions. Not a word said about the fact that the shooter is clearly not entirely human (and I mean that in terms of development, not dna). It's inarguable that he's missing some programming, that it's either chemical in nature, or he's just been screwy and sociopathic for years and no one ever caught it. It wouldn't be the first time crazy slipped past our radar, would it?

But with no answers in sight, the old familiar bugbears and chestnuts are trotted out. Violence in the movies, video games, and an oldie but a goodie--comic books. Good Lord, what next? Gum in our schools?
I'm quite certain that everyone who will ever read this blog knows that these exterior trappings aren't to blame for anything except maybe allowance depletion. I'll go ahead and add rock and roll music, heavy metal, and Loony Toons cartoons to the list, as well, since they've all come under fire from the very same fearmongers who talk to us now in an endless stream.

Fearmongers. That's our news stream now. Snake oil salesmen and boogeyman-wielding shaman, the lot of them. They are absolutely useless, no matter which side of the political fence you're on. Bought and sold, branded and bland, they are the new Stepford wives for our passive, uncaring society. We should be pushing back against them with every breath they take.

And while I completely understand the genuine intent behind so many of the Batman tribute graphics that have sprouted on Facebook over the weekend, I'd just as soon NOT see that image co-opted and used in that fashion. For one, it's a little bit disingenuous, I think, to re-purpose the Batman origin and link it to this nutjob's actions. I'd just as soon pop culture be taken out of it completely, but I know that's not going to happen. For a number of people who aren't getting answers from Cable News, that Batman plaque on their FaceBook feed may be the only context they receive over the next few weeks.

Finally, I know the word "senseless" gets used whenever these shootings inevitably happen--and it's sad to think that this won't be the last one. But there is a reason for what this kid did. It may not be a good reason, or any reason that makes sense to the rest of us, but there's something in his head that will give us the answer. Undiagnosed schizophrenic? No moral compass instilled in his makeup? Massive chemical imbalance? Pyschotic break? I don't know. But it's in there, and the real answer is going to be mundane and sick and all too common, I'm afraid.

Until then, I'm turning the volume down on my television set, and staying as far away from the "news" as I possibly can. I suggest you do the same. Let those congenitally retarded institutions go through their usual flailings for a while and if you feel so moved to do something positive, reach out in your own community in a way you think is fitting. I don't have any real answers, but I suspect that part of what we need right now is a greater sense of community. And I mean in our physical space, not on FaceBook.

I can't agree with you more. I've also been avoiding the news the last few days.