Chicken Pride Day and What It All Means

No doubt, the memes and cartoons and movies and sniglets and bumpersticker wisdom that has choked FaceBook over the last week regarding Chick-Fil-A and its owner's conservative values have managed to once again polarize friends and families alike, and polarize them where they hurt the most--in their stomach. 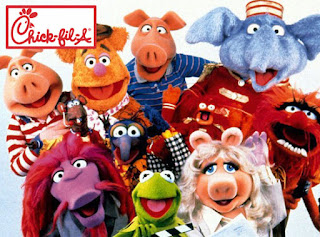 I won't recap the battle, because all you have to do is log into FaceBook and scroll down for six or seven seconds until you find examples of what I'm talking about above, and probably links to the story of how the Muppets ditched Chick-Fil-A after what their owner said, because, well, it's not widely known, but Jim Henson was gay.  And since the Muppets are about everyone getting along together with no hang-ups, you can see how some people close to the creator of Sesame Street and Kermit the Frog might have gotten their noses Gonzo'ed out of shape over that.

This, to me, is a rare peek at a much, much larger concern: who we are doing business with as consumers. I know it's not a pleasant conversation to have, and moreso because no one has ever asked us, as Americans, to have it. In fact, there's been a lot of effort to suppress it. Anytime slave labor or grossly inadequate wages regarding goods and services are brought up (usually in a Wal-Mart discussion), someone who doesn't want to have to make a choice about where their $8 t-shirt comes from will pipe up and accuse someone of being a Communist, a Socialist, or Anti-Capitalism in general. This, of course, derails the conversation completely as the accused now has to assure everyone that they are not, in fact, a Pinko. And so the topic seems to sit out there, bobbing in the mainstream, and only occasionally nudged to the right or the left as it suits people.

Well, in fact, it's not a red or a blue issue. It's a voting issue. It's democracy 101, and most especially since we don't elect presidents anymore, but the Electoral College does, and most people can't name their state senators, and wouldn't take the time to write them a letter if their head was on fire and the politician had the last glass of water in the world. No, I'm talking about the only votes that ever seem to matter in America: the bottom line. The Red and the Black. Profit and Loss. These are our new Overlords, and I do not welcome them. But they are here, nonetheless.

It's really simple: since corporations exist as a firewall between themselves and their shareholders, and the stated intent of all corporations is to make money for their shareholders, you cannot really punish a corporation the way you punish a person (and Mitt Romney is wrong--about so many things--but most emphatically that "corporations are people"). All you can do to send them a punitive or encouraging message is to vote with your dollar. Spend it or withhold it as you deem necessary. When the shareholders see the bump, or the dip, the next quarter, they will know why, and they will correct whatever is causing the bump. And it's just that easy. 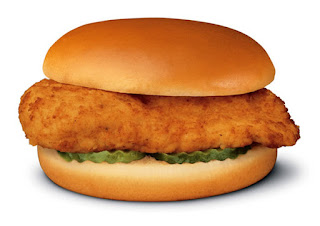 There were lines around Chick-Fil-A restaurants across America yesterday, and I suspect they were all in line for one of three reasons:

1. Their chicken is delicious and they wanted a sandwich. This would have been the smallest group yesterday, incidentally.

2. They felt that poor old Chick-Fil-A had gotten beat up over the past week and they were making a show of supporting them (really a sympathy purchase) to help them in these trying economic times. I need a minute after that last sentence; it's hard to type while laughing out loud.

3. They honestly, earnestly believed in the sanctity of Chick-Fil-A's stated policies of not being open on Sunday to observe the Sabbath, giving donations to Right to Life organizations, and admonishing the gay and lesbian community in general for their hedonistic ways. These would have been largely the politicians and pundits who needed a photo-op and something to Tweet about.

I've known about Chick-Fil-A's practices for some time, and I've curtailed 98% of my spending there, which amounts to doodley squat for their bottom line, but it mattered to me. It meant the chicken sandwich I bought didn't contribute to a Right to Life group, however legitimate, who may have taken a donation from Chick-Fil-A, and then that money somehow got handed off to a more radical sect, who thinks it's okay to firebomb clinics and kill doctors and nurses in order to justify the existence of what amounts to a parasite growing in someone's body. An extreme example? You betcha. But understand this: I have no say in how Chick-Fil-A spends its money. None whatsoever. And neither do you.

If a corporation wants to fund overseas heroin farms with its profits, then I don't want anything to do with that corporation. And neither should you.  Another extreme example, but I'm making a point. It DOES matter where and how we spend our money. In the wake of scant to no regulation of things like investment banks, companies doing business overseas, and so forth, it seems clear to me that the message is not self-regulation but fiscal regulation. We send the message with our purchases, or lack thereof.  We the people tell the corporations what we will and will not accept.

Think about it: no matter how many negative Wal-Mart stories you see on the news about cheap Chinese labor, they don't change. Why? Because people are still buying $8 shirts, whether they need them or not, because "it's a good deal!" Consider what would happen if Wal-Mart got 10 million signatures asking to buy clothes made in the USA again, and that we'll stop buying t-shirts from them until they do: they'd laugh at first, but after one month of their t-shirt sales being down 75%, they'd have a textiles factory in the midwest up and running in a fortnight. Think about it. Does Wal-Mart like to leave money on the table? They do not. 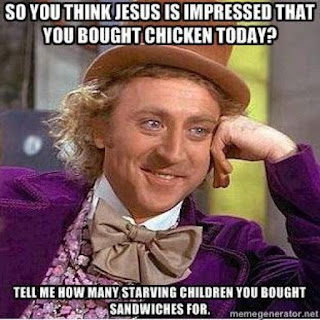 The problem is, we've never really used that power. Not until this, until now. And it was kind of a bust, really--so many people signed on for a Chick-Fil-A sandwich yesterday in some kind of righteous indignation, even as this picture made its way across FaceBook. And this is always--ALWAYS--an option for Christians to lead through action rather than to get drawn into a debate with other people. I would think that if someone was really passionate about their beliefs and the opportunity to both support a multi-million dollar chicken restaurant and also feed the homeless with delicious sandwiches presented itself, it would be a real win-win for everyone else involved, including the homeless. But of course, the last thing a lot of the people who espouse these values  seem to care about is putting a sandwich into a needy person's hand. There's irony in there, somewhere, I'm sure of it.

So, now the door is open. You can peek inside and see how they make the sausage, and if you don't like it, you don't have to buy it. You can even tell them why. My suggestion is that you start doing that very thing. Of course, most of the people who read this blog already do things like this anyway, so I'm just preaching to the choir. Therefore I have to ask you to start talking this idea up with the people you know who don't know any better. It's time America started thinking for itself again.

Now if you'll excuse me, I'm going to go figure out how to reverse engineer their secret recipe so I can make Chick-Fil-A sandwiches at home.

You make an excellent point about Christians leading through action. I try to, although I don't do nearly as good a job as I would like. I just wish more would. It's been my observation that debates don't change anybody's mind.

If you figure out that recipe for their sandwich, let me know, I'm headed your way for lunch! Good post!