I used to work for Chessex Manufacturing, out in Berkeley, California as their editor in chief for their creative division. It was one the coolest, and also one of the most frustrating jobs I ever had. I won't go into it here, because it's a tale best told over beer, and with some help from my friend Weldon Adams, who was there with me. The story is more of a performance piece, really. It requires props and a brief intermission for a costume change.  Ask me about it at a convention sometime.

But that's not why I called you here today. I am coming clean about something that has taken on a kind of cool cult status in popular culture. I'm the guy who originated Cthulhu barware. I know that seems like a small distinction of note, but bear with me. I'll try to make it relevant.

Chessex Manufacturing was making etched glasses, among other things, in the mid to late 1990s. Stuff like Vampire: The Masquerade wine glasses with the creepy ankh logo on them. This was in addition to their regular line of gaming accessories, dice, battle mats, dice, vinyl book covers, dice, gaming bric-a-brac, dice lead miniature cases, dice, paint, dice, and oh yeah, speckled dice.

Weldon was in charge of research and development, and that job was only slightly more glamorous than my job title of editor in chief. He and I together worked on roughly 75% of the line projects together in some way. He had a few of his own things going, as did I, but since we lived and worked together, there was a lot of cross-contamination. Anyway.

As was the usual deal back then, we needed to put out something new. Some new product. Something to generate cash, and quick. And so we were all feeling the pressure. Weldon mentioned that he'd like to do something with the glassware. We'd already made Vampire clan glasses to go with the T-shirts, and there were some coffee cups with biohazard printed on them (we didn't come up with that), and those projects were pretty easy to do. But what? Weldon wanted to do pint glasses, but that wasn't really a Vampire-ish thing. Hey, we needed new glasses for the apartment. What can I tell you? 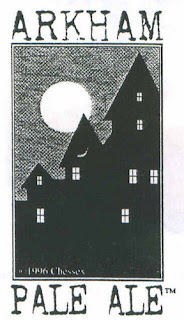 I don't know where the idea came from, but I first suggested fake beer labels with a cthuloid slant to them, but played straight, as if they were actual beers from an actual tavern--and Weldon said, "you mean, like the Whateley Ale House?" Perfect. So, off we go, and since I was all hepped up with the Lovcraftian references, I worked with our house artist, Chris McGee, to design three different logos: Arkham Pale Ale, Dunwich Dark, and Innsmouth Stout (which had the awesome slogan, "Taste the Taint"). We designed them to look like real beer labels, and as an afterthought, Weldon suggested a pitcher with the Whateley Ale House logo--a dancing satyr.

We made sets out of three glasses and a pitcher, and also offered the glasses for sale separately. The sets were limited to five hundred and were signed and authenticated as actual barware from this non-existent brew pub. Everyone liked the logos, so we also offered them as T-shirts.

The powers-that-be got their wish. The sets sold--in fact, they oversold and had to allocate them. Cool. Ditto the glasses and the T-shirts. It was one of the top selling lines that month. We shipped everything to the game stores across the country, and the products were instantly sucked up as if with a Dyson Sphere. 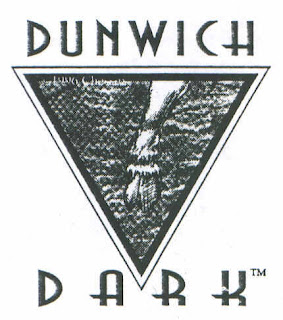 And that's my story. Chessex never went back to print on any of them. In fact, shortly after that, both me and Weldon left the company and they changed hands several times. Chessex manufacturing is still around, making dice, paints, cases, and so forth. But they haven't made anything that cool in a long, long time.

Now other people have made barware, but I don't think theirs is as cool as ours was. I have always loved the idea of a shirt or a glass that, if you aren't a geek, looks completely legitimate to them. These beer labels did that.

Years later, at an ArmadilloCon, a friend of a friend was introduced to me, and he was wearing a Dunwich Dark T-shirt. I hadn't seen one since I was in California, and when I told him that I had designed that, he practically fell to his knees to thank me. The shirt, he informed me, was responsible for a lot of his geek cred. In fact, he confided, he also had the Arkham Pale Ale shirt, but he'd stored it in his garage and some rats got ahold of it...which, if you know your Lovecraft, makes the shirt one hundred times cooler. He still wore that one on special occasions. I didn't ask what those were. 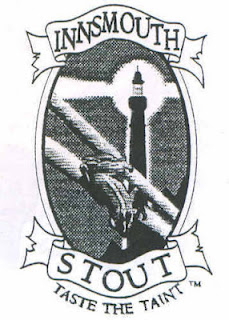 Curious, I went home and looked up the barware and was shocked to find it selling for over a hundred bucks at online auctions. If you have any of these, hold on to them. They are legit collector's items. And here's the rub: I lost my set of glasses in a move. Weldon never even got a set to begin with. Of all the stuff I've ever worked on, those slipped through my fingers. But at least I can show you what the logos looked like. I think they hold up. These were scanned off of the glasses themselves, hence the quality, but you get the idea.

Looking back over this post, I see now that I failed to make it relevant in any way, shape or form. It just comes off as self-indulgent. Sorry about that. I was very excited to find these logos online, having not seen them in over a decade, and wanted to share them with you.

At least now you know what I want for Christmas!