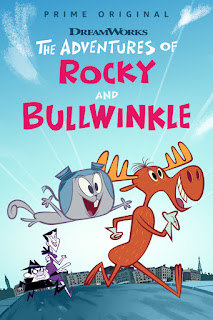 In a quiet moment of intersectionality, I watched the re-imagining of the legendary Rocky and Bullwinkle series on Amazon Prime just prior to the opening of Solo. And I realized something about not just the venerable Star Wars franchise, but also the even more venerable Rocky and Bullwinkle franchise; in a world where intellectual property is, essentially, immortal, it’s completely unrealistic to expect that these properties would remain timeless (as opposed to timely). By extension, there are a lot of people complaining about the movie (or the TV show) that they didn’t get and wondering implicitly (and explicitly) why things can’t be like they always have been.

This idea started to form as I was watching Rocky and Bullwinkle in its newest incarnation—a thirty-minute animated series streaming on Amazon Prime. It was produced in part by the Jay Ward studios (rightly so), and does a great job of including, as much as it could, stuff from the original animated series. But the online reviews are mostly negative, and mostly from righteously indignant people who are presumably 50 years old or older, because that’s how old you have to be in order to be a Rocky and Bullwinkle fan that’s always complaining about how they just don’t make ‘em like that anymore.

Let me tell you, I’m a lifelong fan of Rocky and Bullwinkle. Those cartoons were in syndication in the 1970s, in my formative years, and I was a religious devotee of all of the Jay Ward Studio’s shows and projects. My favorite cereal was Cap’n Crunch (and I’ll bet you didn’t know that those characters were designed and executed by Ward’s studio, did you? See? I’m THAT Bullwinkle fan). Well, technically, my favorite cereal was Jean LaFoot’s Cinnamon Crunch. But my point is still this: that show was my jam, for years.

Now, all that aside, it doesn’t age well, at all. The jokes are very punny and corny and weirdly high-brow and lowest common denominator at the same time. The shows were made at the height of the Cold War, and they very much reflect the zeitgeist of the time. America was a very different place back then, in so many ways, beginning with our shared points of reference. Some of the jokes on the show were vaudevillian, they were so old, but they were touchstones. I didn’t fully understand it at the time, but I wanted to know why my grandfather laughed at a reference that I didn’t find funny at all. That was the beauty of the show, in its time and place—and also why The Simpsons has managed to hang on for so long. Certainly the first ten years of The Simpsons owe a tremendous psychic debt to the attitude cultivated in Rocky and his Friends.

It also explains why none of the Rocky and Bullwinkle revivals have ever managed to stick the landing. In trying to be true to the animated series, writers and directors and producers simply updated the puns and then wondered why the kids weren’t flocking to the movie.

This new version of the show takes the premise, including the cliffhanger-style chapters in a serial format, and thoroughly modernizes it in that “Ren and Stimpy” kind of way (or, if you prefer, “Spongebob Squarepants”), what I like to think of as “lip quiver animation.” You know, like when a character gets all emotional and their eyes swell up with tears and their lip quivers, but nothing else on their face moves? It’s odd to think about how influential Kricfalusi was to modern-day animation, but that’s the only take-away anyone seems to come up with.

That’s the new art direction. And it more or less works. I think the target audience here is kids 13 and under, and this looks exactly like something they would watch. The humor, too, is more absurd and less pun-filled than its predecessor. I think this was simply a necessary creative decision, because the only real puns come at the end of the show, when the narrator tells us to tune in to the next thrilling episode and then gives the two titles. They are all groaners, and they are great ways to end the shows.

Everything else—plot, story, and humor—is rooted in the characters themselves. Rocky is still the brains of the outfit. Bullwinkle is still the loveable imbecile. Boris and Natasha are still vying for Fearless Leader’s affections—oh, and yeah, the Russian angle plays big in this day and age, let me tell you—and even the narrator breaks the fourth wall to address the characters, who talk right back. It’s pretty great.

Not all of the jokes land, but I suspect that’s because I’m a forty-seven year old man watching a cartoon aimed at thirteen year olds. Some things in the show, and I won’t spoil them for any of you, are deep-cut callbacks for any senior citizens who may be watching the program with your grandchildren. Many ancillary characters show up in brief cameos, some classic bits from the show are re-introduced, and certain institutions are observed, such as making storylines that run for several consecutive episodes. Nice touches, all.

When I found myself giggling at things, it was usually because Rocky and Bullwinkle were acting in character in the service of the story. In the first episode, Bullwinkle declares “I made pie!” and it broke me up. After about four episodes, I was committed to watching them all. After watching them all, I was pleased that I got some laughs out of the show, but was keenly aware that they didn’t make that show for me, the Aging Member of Generation X who fondly romanticizes those cartoons because they remind him of Saturday mornings, eating cereal, and being a kid, not to mention revisiting those shows in the intervening years and re-discovering the jokes I’d missed out on as a kid. There is no way in Hell they could have made a contemporary cartoon like that, nor did they want to, and there would be no purpose for it if they did.

So, if you’re interested in watching Rocky and Bullwinkle, or you want a clever show to watch with your kids, by all means, give it a shot. It’s not the long-awaited-for sixth season of the original show, and wasn’t meant to be. Instead, it’s a respectful updating of the show that deserves much better reviews from its target audience instead of the righteously indignant members of Bullwinkle fandom (and I’m rolling my eyes just typing that descriptor).

What does this have to do with Solo? You can probably guess, but stick around. I’ll cover it in part 2.