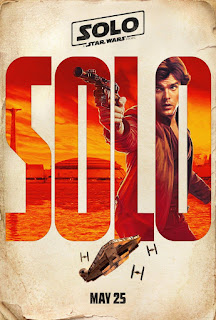 I will be the first one to admit that I was one of the people who wondered, aloud, why we were getting a Young Han Solo movie, wherein we see how in one five-minute train ride sequence he picked up all of his quirks, habits, and signature moves, and then he goes and rescues his father from the Nazis.

Then I watched Solo and when it was revealed that they were going to rob a train, I laughed out loud. There is nothing more epochal, more character building, apparently, than running along the top of a moving train. Who knew?

For the record, I was initially convinced the Rogue One was a bad idea. In both cases, nestling an adventure in between fixed story points that we have all committed to memory over the course of three decades is a recipe for disaster. After all, there can’t very well be any suspense or sense of consequences since we know the main character survives to appear in four more movies.

Maybe so, and maybe in less skilled hands other than Lawrence Kasdan’s, the movie would have been packed full of reverse-Easter eggs, seemingly planted for us to discover in 2018, as if we didn’t know about the phrase “I have a very bad feeling about this,” and then we were going to run out and watch A New Hope, The Empire Strikes Back, and Return of the Jedi and go, “Oh, noice! That’s where it came from!” 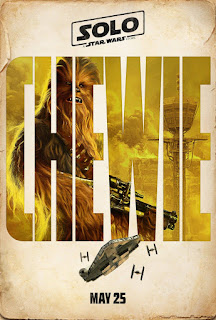 Thankfully, Solo manages to avoid nearly all of those traps. That's not to say it's free of Easter Eggs, because come on, it's a prequel! But these Easter Eggs are pretty oblique and a lot of casual fans are missing them. I still don’t think it has a lot of suspense to it, but Kasdan made the most of a heist in a space western setting that had to be a stand-alone movie and also tap-dance in the service of the fans, that grand, ungrateful mass of mewling mouths and watery eyes. We find out a bunch of things, like how Han met Chewbacca, what the Kessel Run was, and how Han won the Millennium Falcon from Lando. These are, presumably, things I’ve been waiting my whole life to know.

We also find out a bunch of other things; world-building things, not unlike what we were shown in Rogue One—new planets, new real estate, a wider diversity of intelligent creatures and robots, and of course, we get to see them all slaughtered for art. Don’t make friends with any new characters in Solo; they will waste them in the blink of an eye. Damn You Joss Whedon!

I’m kidding, of course (or AM I?). Not everyone dies. In fact, Solo sets itself up for a second movie, and after watching Alden Ehrenreich and Donald Glover tear it up as young Han and young Lando, I’m on board for that—provided that we keep moving away from the Skywalker Dysfunctional Saga that has become the Star Wars franchise. 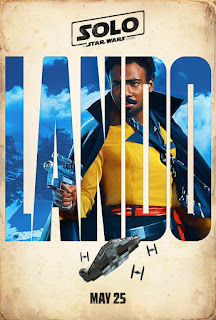 Obviously not everyone feels the same way I do. There is a vocal minority that is freaking out about Solo, The Last Jedi, girls in the Star Wars movies, and the growing realization that maybe, just maybe, Star Wars has left them behind for a younger, sexier fan. I’d love to know how big the circle on the Venn Diagram is between these flapping-head yabos and the InCel shitheads. I have a hunch that it’s probably a single circle. There is also quite a bit of chin-stroking and tut-tutting amongst the professional reviewers of old, wondering aloud why this movie exists. And all of the quasi-news sites online have gleefully reported that Solo underperformed on opening weekend. 86 million dollars and they are trumpeting the “failure” of the movie. This is before the foreign market—which is roughly two and a half times the size of the US/Canada market—gets ahold of the movie. Rogue One had similar tracking. But some people just love a car crash.

All this for a movie with more Lando and more Wookie action than we’ve ever seen before or since.

Is Solo a perfect movie? No, of course not. First off, there is no such thing, and I’m tired of reviewers using an Aristotelian Ideal to measure genre films, and most especially Star Wars films. Secondly, it’s a fricking Star Wars movie. And it’s better than all of the prequels, which should always be the yardstick for whether or not you’ll go see it: “Is it better than the Jar-Jar Binks movie? Okay, good, then I can sit through it without throwing up in my mouth every fifteen minutes.” 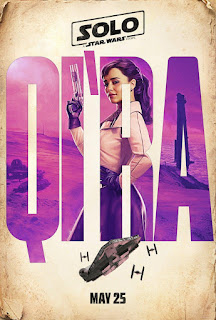 But as space-western caper movies set in the Star Wars universe go, Solo is a great ride, and most of the fans who have seen the movie feel the same way. Kids who grew up watching the prequels first are going to lose their minds in the final act of the movie. I mean, their heads are going to explode. You’ll know why when you see it. Trust me. I still don’t think we needed this movie, but I liked what we got, and liked it enough to want another one. I ask for it cautiously, provided that the movies don’t end up abutting Episode 4, because we never need to see the mission where Han had to dump his Kessel Spice that he was bringing to Jabba the Hut because he got boarded by the Empire. The context clues are perfect in A New Hope, and need no further delineation.

If you like Firefly, or Han Solo, or Chewbacca, or Lando Calrissian, or Donald Glover, or Woody Harrelson, or movies made by Lawrence Kasdan and Ron Howard, then there is no reason to think that you won’t like Solo.

For those of you seething about this film, I know why you’re angry. I don’t necessarily agree with it, but I know why. And it’s not because the movie sucks. It’s something else, something more systemic. You’re going to hate what I have to say. Come back for part 3.