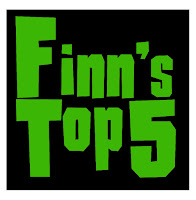 I tend to watch mad science movies with my disbelief mostly already suspended. It’s because these films tend to trend science fiction-y to begin with, and years of bad Star Trek one-offs and worse Doctor Who one-ons have taught me to just swallow the Kool-Aid and go along with it; after all the trip is not nearly as important as the destination. Also, these stories frequently deal with the personal consequences of Mad Science’s actions, rather than public ones. In attempting to control something beyond their grasp, these tortured geniuses lose control over their lives, their bodies, their sanity. Thus the moral of these stories is always something along the lines of “Dare to Dream, but for God’s Sake, Quit Toying With Things Man Was Not Meant to Know.”

5. Altered States (1981)
William Hurt plays a scientist who is convinced that our place in consciousness is subjective and capricious. He goes from studying schizophrenia to chasing down native hallucinogens and combines everything into a sensory deprivation tank, and, well, guess what? It works. It works a little too well.

There’s some really creepy imagery, circa early 1980s and a clearly-alcoholic but still on the rails Ken Russell in the director’s chair. In fact, this is the most watchable Ken Russell movie out there. Everything else was downhill from this one. Newcomer (at the time) William Hurt does a great job of being fascinated by his own work and put off by everyone and everything around him, including his family.

Dick Smith was brought in to help with the make-up sequences, and as usual, his work is so subtle you don’t even realize you’re looking at it. There’s some wicked, interesting ideas in Altered States that helps elevate the film past its uneven screenplay and pacing problems. When the crazy stuff finally starts breaking out, the film gets very interesting and more than somewhat disturbing.

4. The Invisible Man (1933)
Ah, the Invisible Man...one of the early Universal monsters who is frequently (if not ironically) overlooked because he’s not monstrous enough, I suppose. The movie, varying more than somewhat from the H.G. Wells story of the same name, contends that the process of invisibility is what makes Griffin insane. Wells was still alive at the time and thought the ending was rot, but we’ve had a cackling, insane Invisible Man ever since, and that is a frightening concept because we all know what we would do if we could turn invisible.

That’s how the movie gets you. There’s freedom in invisibility, but also the urge to stop behaving like a civilized person. Who wouldn’t, right? It’s a weird thing to consider, and also, fairly easy to address, so I don’t know quite how “amok” an invisible man could run.

However, Griffin is one of the great movie mad scientists, and this early sci-fi thriller still has some creepy bits to it, including some still impressive special effects for the time. The Invisible Man makes a good “intro to mad science” movie to spring on people who don’t like a lot of grossness and goo in their horror movies.  You’ll be able to appreciate it even though it’s not particularly scary.

3. The Brood (1979)
You had to know that director David Cronenberg was going to make the list. Well, this is the first of two movies in the Top 5, because Cronenberg is a creepy guy and his movies are almost all about the corruption of the body and the loss of control over same. Big theme in Cronenberg’s work, and here he bends it into a terrifying allegory about his own divorce.

I know, it sounds like a car crash, but it’s a spectacular, if somewhat freakish, car crash. Oliver Reed plays a psychologist who runs a clinic for mentally disturbed people and his methods involve changing their bodies to help heal their minds. Our hero’s ex-wife is one of the good doctor’s patients, and they are using their five-year old daughter like a hockey puck between them. As dad starts investigating Dr. Raglan’s practice, he leaves his daughter with his mother. And that’s when the creepy killer monster kid shows up and kills the grandmother.

Things go downhill from there very quickly. Everyone doubles down on their position, which only cranks up the tension, and when you find out what the creepy killer monster child really is, you’re going to freak out. It’s messed up. So very messed up. But that’s Cronenberg, man. None of his scientists and doctors ever come to a good end. He loves change, but for Cronenberg, it’s a violent, hostile process that always leaves scars.

2. The Fly (1987)
The gory and gruesome remake of the 1958 sci-fi classic The Fly may have well been the zenith of David Cronenberg’s obsession with the human body and the loss of control of said body. It’s certainly one of his best, most watchable films, and yet, it pulls no punches in the script or in the horrific visual effects.

Seth Brundle, played with his usual quirky flair by Jeff Goldblum, is working on teleportation. He’s almost got it licked, except that the computer isn’t so good with living tissue. Geena Davis is the science reporter covering the story—and quickly enough, the scientist, too—as they knock boots and send stuff across the room with the telepods.

Of course, Brundle gets impatient for results and teleports himself. And it would have worked perfectly, too, except for the pesky fly that gets into the pod with him at the last moment. Soon thereafter, the changes start to occur.

The original 1958 movie was based on a short story by George Langelaan, and the screenplay is pretty faithful. The scientist gets a fly head and a fly hand. That’s it, that’s all, nothing else. A quintessential 1950’s idea and somewhat iconic image, a symbol for B-Movie schlock. Cronenberg makes the fly DNA more invasive, more sinister. Brundle’s speech about “insect politics” and his concluding statement are horrible to comprehend, especially from Geena Davis’ point of view, as she is now carrying Brundle’s unborn child. Truly disturbing implications abound throughout this effective and influential film.

1. Re-Animator (1985)
Herbert West really has the best of intentions: he wants to conquer brain death—the time at which the brain, without oxygen, expires. In the movie, this is a six to twelve minute window of time. Plenty of time, in fact, for West to shoot up a fresh corpse with his bioluminescent green goo and turn them into mindless, thrashing super zombies.

That’s the basic premise of Re-Animator, a film that is as faithful to the H.P. Lovecraft story of the same name as Conan the Barbarian resembles the collected works of Robert E. Howard. That both movies are cheerfully irreverent towards their literary roots doesn’t make them any less enjoyable, however. Re-Animator single-handedly jump started the new movement to get more Lovecraft movies made. That the director and producers were still the only people doing it for years afterward is beside the point.

West’s failing as a scientist is his inability to back up and see the moral and ethical implications of his experiments. He also refuses to back off of his initial successes with the formula. Sure, the subjects come back from the dead mindless, but hey, you can’t make an omelet without breaking a few eggs, am I right? What’s left is a one-on-one exploration of man’s quest for knowledge with no thought as to the consequences of that quest, what it will cost, the morality and ethics of what’s involved to achieve those answers, and whether or not we should be asking them in the first place. If that ain't science run amok, I don't know what is.

Good Lord, what a movie. Some people find this movie hilarious, and I think it’s funny in a darkly unintentional way. The actors and director are on record as saying they weren’t trying to be funny, but some things just developed organically throughout the course of the movie, such as the wonderful scene involving a freshly hewn-off head and a letter holder. This film introduced us to Jeffrey Combs and his quirky delivery and squirrelly intensity certainly helped the Wham-O-bouncing-ball tone of the film. One of my favorite mad scientists of all time.