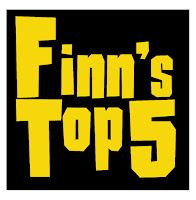 I’m including this category only for the sake of completeness; otherwise, it would have looked conspicuous by its absence. Mummies are my least favorite movie monster. I mean, I still like them and will watch them, but I’m always disappointed in the execution; I don’t think we’ve yet seen the Citizen Kane of Mummy movies.

The problem with mummies is that we’ve moved past their cultural relevance. During the heyday, when Orientalism and Egyptology were in vogue, and new grave robbing—excuse me, archeological expeditions—yielded weekly finds in the newspapers, at a time when Egypt might as well have been Mars for all the common man knew, and these British plunderers were all too happy to ignore the warnings about disturbing the dead and cracking open tombs, well, sure, mummies were the shit.

Think about it: Empirical Britain, with its indulgent, institutionalized Colonialism, with its foot still on the neck of the British Raj in India, and now encroaching into Egypt to show the turban-wearing desert folk a thing or two about their five thousand year old culture. All too eager to overwrite Egyptian history through a British lens. What better way to punish these stiff-upper-lip-having, upper crust professors and their landed gentry friends than by having something from another culture’s history throttle the life out of them? The thing you pooh-poohed as being a silly superstition isn’t so silly when it’s crashing through your door, now, is it?

As a kid, of course, the strangeness of the Mummy and the crazed people who can’t believe their eyes as it lumbers...slowly...oh so slowly...to kill them was cool. What’s not to love about the walking dead, I ask you? As I’ve aged, much like cheese, the specificity of the setting has limited my enjoyment of the same-old, same old. There are other mummies, after all, than those that are found in Egypt. Mummification is a condition not specific to the Fertile Crescent. It’s too bad that The Robot vs. the Aztec Mummy (1958) is so laughably horrible. See, I want movies like this to be good. And I don’t mean, “good if you’re drunk” or “great if you’re stoned.” I mean good right out of the gate and with no apologies. Sadly, this is not ever the case. I would only recommend watching it if you watch the Mystery Science Theater 3000 version.

But I digress. If you must watch a Mummy movie, here’s my Top 5 with the usual caveats in place.

5. The Mummy (1932)
Universal Studios, flush with success from Dracula (1930) and Frankenstein (1931), needed another monster to field. Ostensibly looking for a literary property (see, even back then, Hollywood wasn’t taking a chance), they eventually settled on a story based on the rumors of a Pharoah’s curse that struck archeologist Howard Carter's team and other prominent visitors to the tomb shortly after they opened the tomb of Tutankhamun in 1922, and kicked off the big Egyptology craze of the Gilded Age.

The movie is a mish-mash of popular reportage of real Egyptian archeology, invented Orientalism, and of course, star-crossed lovers. What sells the film is the incomparable Boris Karloff as Imhotep, initially entombed alive and without undergoing the mummification ritual where the organs are removed. This makes it much easier to come back to life, since all of his junk is not sitting around in canopic jars.

Revenge, modern look-alikes for ancient lovers, and Karloff at his most gaunt and sinister, rocking the fez, no less. I don’t think you’ll be truly scared once, but the Mummy presents a number of plot points that have been adopted into the standard operating procedure manual and it’s good to see the origins of these things for yourself. And Karloff. Always bet on Karloff.

4. The Mummy (1959)
Hammer’s take on the Universal Mummy movie is one of their better efforts. Before the mummy dries out, there’s a lot of wetwork that takes place, and it’s poor Christopher Lee that winds up under the gunk, his mouth sealed, one eye covered, wrapped in aged bandages. This time, the curse is on him for daring to love outside his social caste. Oh, and for trying to bring his beloved back from the dead. Something of a taboo in their culture, and so Kharis is entombed with his dead beloved, set up as a guardian for her in the afterlife.

I did mention this was British, right? This blend of gothic colonialism works about as well as can be expected. The unknowing archeologists end up right in the middle of Kharis’ tale of woe. That doesn’t keep Kharis from wreaking a terrible vengeance on them for picking on his girlfriend.

This movie borrows several plot points from Universal’s mummy sequels, The Mummy’s Hand and the Mummy’s Tomb. They aren’t very good, but this movie is, mostly because it mashes everything up into a more concentrated story. Veteran Hammer director Terence Fisher set the pace for these films and typically knew how to get the best out of Christopher Lee.

3. “Lot 249” from Tales from the Darkside: the Movie (1990)
I’m cheating by including this segment from the Tales of the Darksidemovie, but it’s an adaptation of a classic short story by Arthur Conan Doyle, and moreover, it’s a good one. And like most good literature in the 20th century, it’s always the basis, never the heart, of the adaptation into film. The example here is apt.

The Tales from the Darkside movie is fun anyway, because it’s a horror anthology. “Lot 249” is, without a doubt, the strongest story of the bunch. It’s got a fairly unique premise of using the mummy strictly as a murder weapon, a supernatural hit man that could get away with murder because, well, who’s going to charge a mummy with homicide?

Not quite yet veteran actors Steve Buscemi, Christian Slater, and Julianne Moore play these parts with relish, especially Buscemi and Slater, who both go way over the top in the service of the script. There is, of course, a twist ending that puts this film into the Creepshow/E.C. Comics category, but I suspect you’ll be all right with it. I sure was.

2. The Mummy (1999)
Okay, this one isn’t even remotely on the fear chart. It’s an action-adventure romp with some wry comedy thrown in. But as far as movies with a mummy go, it’s pretty awesome.
Brendon Fraser stars in the movie, along with Rachel Weisz, and it’s written and directed by Stephen Sommers before he ruined Van Helsing. Plot-wise, it has all of the original elements of Universal’s original outing (after all, this was supposed to be the sexy update), but there’s a lot more going on in this version of the story. That’s a good thing, as the film is padded out with action sequences and CGI to produce a much more active mummy. Imhotep is more of a lich, for those of you who ever played Dungeons & Dragons, with a vast array of magical powers and the forces of darkness at his beck and call. It certainly raises the stakes.

The best thing about this film is that its backstory is very deep; if you like it, you can watch the sequel and then start all of the Scorpion King spin-offs, which are, on the whole, not bad dark fantasy/sword and sorcery movies. Again: none of them are scary. But the story is engaging and Sommers does a great job of building this much larger world out of these few spare parts.

1. Bubba Ho-Tep (2003)
You love Don Coscarelli’s movies, even if you don’t know who Don Coscarelli is; a quirky, kinetic director who loves to tackle unfilmable stories with crazy visuals. You can always spot a Coscarelli movie a mile away. Two great examples are Phantasm and The Beastmaster. You may add to that list Bubba Ho-Tep.

Based on a short story written by Joe Lansdale, we find Elvis Presley, convalescing in an East Texas nursing home under an assumed name. He has bedsores and regrets, and he’s just about given up. His best friend is JFK, who had his brain transplanted into a the body of a black man in a wheelchair by the CIA in 1963. They are the only two people in the nursing home who are trying to stop an ancient mummy from sucking the souls out of the old people in order to bring itself back to life.

My Top 5 Favorite Creatures from the Deep Movies

"Think about it: Empirical Britain, with its indulgent, institutionalized Colonialism, with its foot still on the neck of the British Raj in India, and now encroaching into Egypt to show the turban-wearing desert folk a thing or two about their five thousand year old culture. All too eager to overwrite Egyptian history through a British lens. What better way to punish these stiff-upper-lip-having, upper crust professors and their landed gentry friends than by having something from another culture’s history throttle the life out of them?"

I'd been pondering this when the most recent (terrible) Mummy film came out. Some of the things Victorians got up to with human remains were horror movies in their own right:

I can see a horror story where an ancient Egyptian reincarnated into the early 20th Century sees themselves - or their relative, friend, lover - being unwrapped and paraded around by arrogant fops like a grisly puppet, leading to a most cathartic story of vengeance.