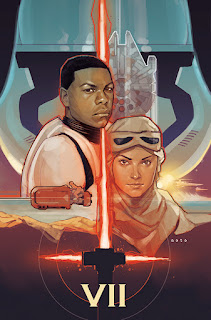 I'm already seeing it--the snarky posts, the cheeky reviews, the hipster-bullshit-condemnation of the new Star Wars movie. It happens every time something popular threatens to bring fandom together to, you know, get along, under a common banner, or standard, or even via a common language. For something that is nearly forty years old, you'd think that Star Wars would get a pass, wouldn't you? By Star Trek's 25th anniversary, their status as an "institution" was conferred, and they were in the middle of making terrible movies.

Maybe it's the commercial aspect of Star Wars they object to. Maybe Lucas kept tinkering with it for too long and squeezed everything that made it good the first time out of the subsequent iterations. Maybe it was the price tag that Disney paid for it, a willfully obscene amount of money by anyone's defintion. I don't know, honestly. But here's the deal: I don't care that you didn't like the movie. I honestly could not give a shit. That you spent twelve dollars on the film to be insulted by it, and then spread that bile over the Internet, is your problem, not ours. So, please stop vomiting your displeasure up and calling us over to look at the eructation.

This is where it seems to break for these nattering nabobs and nay-sayers. They fall into three camps:

1. "I never liked Star Wars, even when I was a kid. It just didn't interest me then and it sure doesn't appeal to me now."

You know who those kids were in 1978? The weirdos that even the weirdos wouldn't play with. EVERYONE was into Star Wars. For six years, if you knew the right quote, or piece of trivia, or had the right toy, you were spared a beating from the class asshole. Why? Because he liked Star Wars, too. I don't know who hurt you; maybe your father, the alcoholic, used to flick lit Star Wars figures at your head to wake you up in the morning. But that's your damage to get square with.

And I know I'm being judgey right now, and I don't care. If you didn't like Star Wars as a young person, then I find that highly suspicious. Either you pre-dated the hipster movement during post-modern's heyday, making you post-post-modern, or you were just fine being the one irritating kid that didn't like anything. Either way, I am highly suspicious of your judgment when it comes to subjective criteria and art and I'll never trust any recommendation coming out of your mouth, ever.

2. "When I was a child I thought like a child, but when I became an adult, I put away my Star Wars toys and realized it's just for kids."

We can debate that all day (watch Episode III again and when Anakin slaughters all of the Jedi children, let me know how that sits with you), but the point is this--I had memories of a great childhood, one that the Internet and our Digital culture have all but completely ruined for me. You can't go back and re-visit the shit you enjoyed as a youth, because it was terrible. Wonder Woman? God-awful. Battlestar Galactica? Forget it.  Buck Rogers? Flash Gordon? Battle Beyond the Stars? Come on. It's all horrible. You know what still holds up, though? Star Wars. We all hate the teddy bears, but it doesn't keep us from rewatching Jedi all the way through.

That you have cut yourself off from your childhood joy makes me very sad for you.

3. "Come on, it's just such a product of the hegemony! Elitist, Classist, Racist, Sexist, and oh yeah, badly written. Lucas can't direct, Mark Hamill can't act, and no, I'm NOT a Star Wars fan! I'm wearing the vintage 1978 Iron On of R2-D2 IRONICALLY! So, yeah, whatever."

Ah, the hipsters. I knew you'd be in this group, barking the absolute loudest. What's even weirder is that they are doing it in SF/F author/fan circles. Why? Because everyone is talking about Star Wars and not whatever pet/fringe/foreign/under-appreciated/personal novel they constantly champion instead. "The science is bad." Thanks, genius. Where were you during every single science fiction movie over the past 75 years? Just now, the science is bad? This is right up there with that willfully obtuse newscaster from MSNBC who thinks Star Wars is racist because Vader is black.

News flash, Genius. I can make anything racist, satanic, or sexist. It's easy. You just put on your filtered glasses, and look for anything you can twist around like a balloon animal into another shape. It's easy to do, embarrassingly so. When you've stuck your head so far up the ass of whatever social/cultural/academic zeitgeist you're currently contributing to that you can't NOT see it everywhere, that makes me super sad for you.

Then there's the SF fans...not necessarily self-loathing, but for some reason, always looking for a way to shit on whatever other people like. "Rey is a Mary Sue," they say. Aside from the misuse of the term, there's never been a genre more forgiving of its heroes and heroines--up to and including the characters in books and movies that this chucklehead likes--than Fantasy and Science Fiction. These plot hole-spoiler posts, these snarky asides, these broad, sweeping condemnations of the franchise that brought tens of thousands of people into their chosen industry and hundreds of thousands of people into the related fields of gaming, animation, movie making, et.al, and millions of people with an appetite for fantastic storytelling up to the plate--well, they ring hollow. They smack of disingenuous jealousy.

Hey, Look, before you start kvetching back--I understand. I was on your side when that Flash in the Pan, Twilight, clogged the internet up. I get it. And sure, okay, Harry Potter was a YA series that maybe shouldn't have appealed to as many adults as it did. But you're messing with Star Wars, now. You're pulling threads on a Gordian Knot. This franchise is both the Alpha and the Omega, as this weekend confirmed. A whole new generation of kids just came out of the movies indoctrinated into the Star Wars family. I know. I watched them come out of my movie theater all weekend. Those kids are your economic future, if you consider yourself to be a Creative Person of any kind.

I get that you say you don't like Star Wars. I don't pretend that I'm not bothered by it, but I'm going to make you a deal: shut your big fat flapping mouth and quit trying to bring down a bunch of people who are having a good time and NOT arguing politics for once this year, and I won't knock you down and take your lunch money and call you names. Just go play an XBox game and wait for this to blow over. I hear Star Wars Battlefront is awesome. We'll rejoin you in February when Deadpool comes out, okay? Until then, keep your head down and stop trying to kill our joy.

Real fans, genuinely disappointed for one reason or another, are not going to use this as an opportunity to "count coup" and score social/political points by punching down on Star Wars. That's the problem I'm seeing. It's like the "film critic" who says they hate Martial Arts movies and then goes on to tell you for 2,500 words why Kill Bill is Tarantino's worst movie. If you want to have a go at Tarantino, be my guest, but don't throw something under the bus to highlight your ignorance.

Now, the flip side to this is....FANS...mostly GROWN-UP Fans...need to be okay with hearing that The Force Awakens isn't perfect. Legit criticism needs to be at least acknowledged. I think it's fine to love flawed things. And, judging by the number of people who adore Dino de Laurentis' Flash Gordon movie, most fans should be well-attuned to the idea of something being so bad that it's good.

So, I guess what I'm saying, in my unfair and un-egalitarian way, is this: Star Wars is OUR movie to like or dislike, and if we choose to criticize it, that's our right. Everyone else, who hasn't spent thousands of dollars loving the franchise over the years, doesn't get to talk shit
Posted by Mark Finn at 8:27 PM