I got a job in my late teens that would change my life in so many ways. My friend Brent’s family owned a comic book store. They also sold baseball cards and other collectibles and memorabilia. He thought we could work well together and so I was hired as a part-time after school counter helper. It was the beginning of a series of jobs that ruined me for honest work now and forevermore.

There are few jobs that have as much social currency, cultural weight, and insider credibility to the Geek Nation as working in a comic book store. While the rest of the world thinks all comic shops are built like The Android’s Dungeon and all comic store flunkies are Comic Book Guy from the Simpson’s, the rest of us know better. Only some of the world’s comic shops are an unintended homage to the Android’s Dungeon and Comic Book Guy. The rest of the comic shops are actually very cool places to work and hang out. Nowadays, that is. Back then, you pretty much took your chances.

This has not always been the case. In the 1980’s, comic shops were the sausage-festivals you would imagine them to be, and with that lone statistic comes a host of other inferences you may correctly make about working at a comic book store pertaining to smell, emotional maturity, and general dorkiness. Still, there were exceptions to these rules. The store I worked at tried very hard to be professional. We welcomed everyone, and we did our best to not make anyone (meaning, you know, women) feel creeped out. That most of us had girlfriends, or at least dated girls at the time, was a testament to our success in is regard. I know you probably don’t believe me, but it’s true.

That’s how I found myself working the comics counter at one of only two comic shops in the Waco area. I learned a lot about not only the care and preservation of old comics, but grading in general for paper collectibles. We had the wherewithal to occasionally buy memorabilia, such as the glass Pepsi glasses with the DC Comics super heroes on them. Or Mego 8” action figures. These were occasional items that we came across. Mostly, it was comics.

I think it was Brent who decided we were going to start buying and selling Star Wars toys. He and his family were always looking for what the next trend in collecting was, as you can well imagine. We all knew that there were after market Star Wars toy collectors out there. The movies were ten years old, at this point. Figures and vehicles were starting to show up at flea markets and even the occasional comic convention among the proto-toy dealers, and as always, condition was everything.

It was a good move. We were the only store actively buying Star Wars toys, and once the word got out, oh boy, here they came. Of course, we were most interested in things that were still in their original packaging. Boxes and blister cards. Unopened. Unplayed. It was hard to come by, as most self-respecting kids tore into this stuff the second the Christmas wrapping paper was off. But there were a few cool things that showed up, and we paid good money for them. Oh, and lots of loose figures and loose guns. 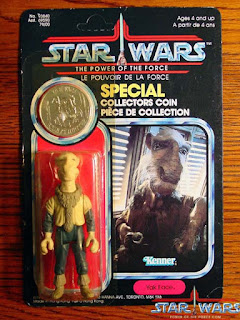 This was a regular topic of conversation in the store; what we had as kids, and what we didn’t have, and what we always wanted, and what we didn’t know was even out there. Right away, the most coveted items of our collective childhood began to take precedent. Tall blue Snaggletooth. Sears and Montgomery Ward exclusives. Power of the Force action figures. Yak Face. Mail in figures. You know: the Good Stuff.

This went on for years. We displayed the toys; even hung a couple of the space ships from the ceiling. We turned ourselves into Star Wars toy experts. After a while, we got sort of blasé about the stuff that walked in. “A complete Droid Factory? Oh, my, yes, we’ve had those before. Oh, you’ve got a Slave 1 in the box, that’s nice.” We weren’t being assholes about it, mind you, but frankly, if you’ve seen one tall blue Snaggletooth, you’ve seen them all.

One day changed all of that.

Brent took the call and when he got off the phone, he informed me that a guy was coming in with a couple of boxes of Star Wars stuff. He nodded. I nodded. We knew what this meant. Probably a beat-up X-Wing Fighter, missing the stickers, and a handful of action figures that looked like they did actual time in an actual swamp. It was important not to get excited before the customer got there. What they consider to be valuable and what’s actually, really valuable are two wildly and completely disparate things, usually.

When the guy showed up, he had more than two boxes. The first one he came in with was full of loose stuff; things from his childhood. I got busy doing something else, and after a while, I looked up to find Brent looking at me with his eyebrows raised while he was talking to the guy. I took this to mean he needed me.

As nonchalantly as I could, I strolled over. “Mark, this is so-and-so. Mark is our Comics guy, and he also is a big Star Wars fan,” Brent told the guy, whose name I have completely blanked on. We shook hands, and then I glanced down at the figures Brent had set aside. They were Power of the Force action figures, which were the really hard-to-find figures at the time. They were loose, but they were pristine, and they had all of the weapons, and the coins. This guy had enough commemorative coins to put in a treasure chest. Coins everywhere.

This was not the Star Wars buy we were looking for. This was something else entirely.

I picked up the Luke in Stormtrooper armor and said, very calmly, “Oh good, you’ve got the helmet.”  I then put it down and walked away. Very casual-like. We did not want to tip our hands, here, because we wanted—nay, we needed to buy this guy’s stuff. This guy wasn’t a motivated seller, like so many of the treasure hunters we used to get in those days. This guy had heard Star Wars toys were hot items and wondered aloud if his stuff was worth anything, and would we take a look at it? This would require every ounce of finesse in our adolescent frames. Thankfully, it was neither of ours first rodeo.

Another box came out from the car; more random stuff, but in really good condition, and some things in the packaging. There were also packages—unpunched cards for the action figures with no plastic bubble on them. Where the hell was this guy getting this stuff from?

In the course of the conversation, it came out: his family was from Ohio, and his mother (or father) actually worked at Kenner during the 80s. They brought this stuff home for him. Right off of the factory floor. He had a handful of random guns—things that, in the beginning of the hobby, were so difficult to come by. All of the mail-in figurers in packages, unopened. Stacks of coins. Things that were probably sitting in giant bins in the Kenner factory that we would all have given our lightsaber-wielding hand to get a free scoop of when we were kids.

“There’s one more thing I wanted to show you,” he said. “I’ve never seen another one, so I’m curious as to your take on it.”

At this point, we would have examined his colon if we’d asked him to. “Yep, it looks just like the Death Star exhaust port, you betcha.” Instead of dropping trou, he went back out to his car for a third time, and came back in with another box. In this box was a Darth Vader carrying case.

You probably had one of these. Black molded plastic in the iconic shape of the Dark Lord of the Sith, this case could be cracked open, split in half thanks to a hinge along the bottom, and it held a lot of action figures. It was the preferred carrying case for all kids from Empire on. And he had one that was still in the cardboard package and shrink wrap.

I’ve heard of certain celestial objects presented to the various priests and saints having a kind of internal glow about them. That’s what this thing did. We couldn’t look at it. Not right away. Not directly. It was like fire from the Ark of the Covenant. Sure enough, though, eventually Brent took it out of the box and we just stared at it. Very calmly, very casually, as cool as I’ve ever seen Brent be, he said, “Yeah, you know, I’ve never seen that before. Mark?” He gave me a look that said, “Don’t blow this.”

I shook my head, slowly. “Nope. Never seen that before.” I said it with the same tone of voice I used when I turned down Subway as a lunch suggestion. And then with all the energy I possessed, I went back to grading comics and tried so hard not to keep staring at it.

Brent bought it. For the store, I mean. How could he not? The negotiations were harrowing, and in the end, he spent a lot of money for the guy’s collection. A LOT. After all, this guy was parting with childhood memories. We, on the other hand, were obtaining something that, for all we knew, was unique. After all, it came directly from the factory that this kid’s parent worked at.

We did not put it out right away. There was a time and a place for such an unveiling, and this was not that time and place. Besides, there was research to be done. We found out, some time later, that what Brent bought that day was a prototype product test. See, the Darth Vader carrying cases were so popular, they wanted to do another case, in the shape of Threepio’s head, that would function the same way. So, in order to get the right finish on the case, they painted several Darth Vader cases with different formulas of gold paint and shipped them to Kenner employees to see how the finish survived in transit.

Smart idea, right? Now that they had their answers, those gold Darth Vader cases had served their purpose. And that’s how one of them found their way home to this one kid, and he in turn brought it with him to Waco, Texas, and how it ended up in a small comic and collectible store, being stared at by two First Generation Star Wars fans as if it were the Holy Grail. Which, it turns out, it was. It’s one of the rarest Star Wars toys around. And it passed through our hands.

Over the years, that buy has become the stuff of legends. The store, and Brent, are still around, still in business, and still selling Star Wars toys. I bought an Artoo and Threepio from them earlier this year. I asked the guy at the counter, “So, did Brent ever tell you about the gold Vader case...”

Kids today. No sense of history.