Raiders of the Lost Ark Made Me This Way... 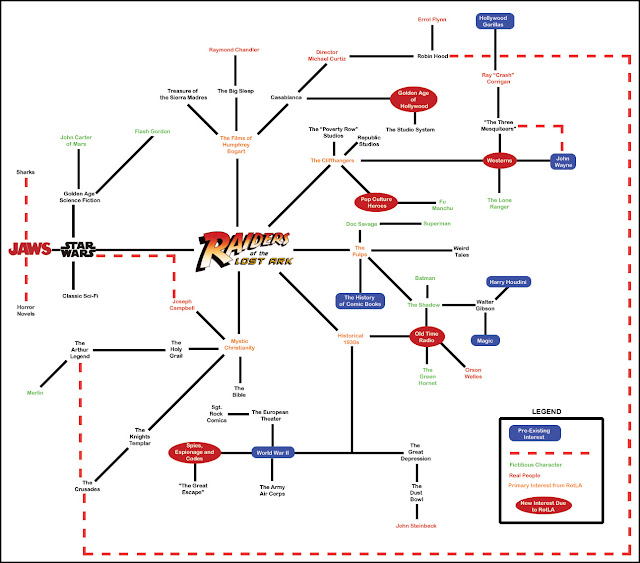 Over the years, I've tried, unsuccessfully, to explain to folks just how important and influential a film Raiders of the Lost Ark was for me. It dropped into my wheelhouse as I was turning the corner on adolescence, at a time when there was no Internet, no Netflix, no YouTube, none of that crap. If you wanted to know more about any given subject, you had to read about it. In books, or magazines--Thank God for Starlog!

As a 12 year old male, Raiders forever altered my course in ways that I've noted over the years, but until you sit down and start trying to backtrack your influences, you don't realize what a tangled mess it all is. I specifically and deliberately stopped when I got to large topics--either existing interests, or newly discovered interests, as they each lead to other branching charts. That's how I was back then (okay, still am)...when I get interested in something, I want to know everything! So, in the case of Raiders, specifically, I watched the television special about the stuntmen who worked on the film, and I read every interview I could find with Spielberg, Lucas, and Lawrence Kasdan. I read the novelization. I collected magazines, bubble gum cards--anything I could get my hands on that had behind-the-scenes information that I could use to decode the formula of how someone could come up with a modern-day whip wielding archeologist who fought Nazis and played with monkeys. You can see how that would appeal to just about anyone, right?

And don't get me started on the my film theory that Raiders is the first post-modern film--a movie about a type of movie, rather than the movie as genre unto itself. I submit to you that because we had Raiders of the Lost Ark, we also got Kill Bill, Inglorious Basterds, and now Django Unchained. I'll go into it later, one of these days, when I have the time. But it's a great theory and it explains why the first film is so very different from the three sequels, and how that happened.

For decades, I've tried to explain it to people, and they would just nod, politely, and reply, "Well, MY favorite movie is blah-blah-blah." No, you don't GET it, I've thought more about this film and its antecedents and influences than I have any other film including Star Wars.  It's not my favorite movie because, well, I just like it, and stuff. It's a part of my creative DNA in ways that still resonate with me to this day.

Because of RotLA, I created "The Blue Menace Mysteries" courtesy of the Violet Crown Radio Players.  Sam Bowen from Clockwork Storybook owes SO MUCH to Indiana Jones. Every 1930s pulp-era Role-Playing Game session I ever ran was informed by the way Lawrence Kasdan chose to write the screenplay to RotLA.

I made this flowchart so you could really see and understand. It's not my fault I'm like this. Raiders of the Lost Ark made me this way...