You may have noticed this year that I've had a few books re-issued, published, and reprinted. So far, there's five new books out there and three more on the way. You may be thinking to yourself, "But Mark, you've written so many books, I can't keep up! I might as well just go outside and play with my dog."

Don't pick up that leash yet, Hot Stuff. Sure, modern living forces you into doing these you don't want to do, like Jury Duty, and math. I get it. So, for those of you who want to support your old buddy/school chum/lover/personal trainer Mark Finn, but you don't have time to read brief descriptions to gauge your interest levels, here's a quick and easy guide to help you select the book that's right for you. Just click on the links below and you will be whisked to Amazon.com where you can make a fast, painless transaction. And if you still can't decide, you can always buy two books. I promise, I won't tell.


"I don't like all that weird sci-fi and fantasy stuff you like. Except for True Blood. And Game of Thrones. Oh! And Twilight. And of course, the Harry Potter books. And American Horror Story. But other than that, I'm not really into that crazy stuff." 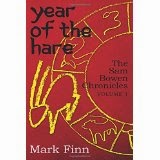 Newsflash: Yes, you are. And you'll love Year of the Hare. Sam Bowen is one of my most popular characters and he's a normal guy who learned magic to try and reverse a family curse that's been placed upon him. This is the first of two books that will collect all of his stories together from the Clockwork Storybook shared world of San Cibola. Click here for a preview!


"I like fantasy and sci-fi, but I'm not real familiar with it. It's all very big and new to me. Also, I like romance and love stories." 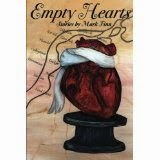 If this is you, then you want to pick up Empty Hearts, my collection of short stories that all deal with love, loss, and desire in a modern-day city where magic is an everyday occurrence. These stories take place in San Cibola, as well, and are a kinder, gentler introduction to that world. Well, mostly... Expect some ghosts and some monsters mixed in with the romance and intrigue. Click here for a sample!

"I love modern fantasy, and I also think Quentin Tarantino is a hoot! This means I have a short attention span. And if you've got something with Elvis in it, well, that would be one Hell of a Hat Trick for me!" 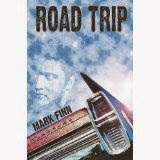 Say no more, Bwana! Road Trip is just what you need. Brash, violent, over the top, and best of all, it's chock-full of profanity and adult situations, just like an R-rated movie! Elvis and Cupid are on a Road Trip to South Padre Island to find Cupid's mother, Venus, who is hiding out amongst the mortals. Really, that's all you need to know. Anything else will spoil the story. Perhaps best of all: It's short! Click here for a sample!

"I'm really into this geek culture. I love it. I have strong opinions about all sorts of things that are, in fact, completely outside of my control, like every casting decision made in Hollywood. Got anything for me, Smarty Pants?" 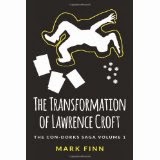 You betcha! The Transformation of Lawrence Croft is tailor-made for you. Follow four super geeks as they make their way to MagicCon, a three-day comic and sci-fi convention in San Cibola. What could possibly go wrong, right? Plenty, is what. It's a romp through geek culture at the intersection of magic and make-believe. And it's also the first part of a trilogy of stories starring the four Con-Dorks.And if you like the first one, the second book, The Chance of a Lifetime, is also available. Click here for an excerpt!


"Well, I don't know about any of that. But I am curious about this mysterious story you just sold to Vertigo. What's that all about? Can we get a hint?" 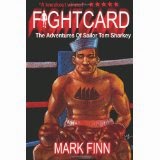 I can't really give you a hint, since the book hasn't been announced or solicited yet. However, if you want to read something that's 100% in the wheelhouse of what I wrote, let me show you The Adventures of Sailor Tom Sharkey. This is a collection of historical weird humorous boxing stories written about real-life Golden Age boxer Tom Sharkey. These stories are very much in the tradition of Robert E. Howard's Sailor Steve Costigan stories, so if you like those, you'll probably like these, as well. Click here for a sneak peek! 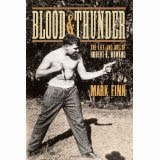 Yeah, something like that. Here's the biography of Robert E. Howard that I wrote. It's called Blood & Thunder: the Life and Art of Robert E. Howard. If you like biographies of literary people mixed with Texas history, then you'll enjoy this book. It's probably what I'm best known for, and a number of people have read it who were not fans of Howard or his writings who said they enjoyed it a great deal. It moves fast, and has a lot of information packed into it. The book was nominated for several awards when it came out. This is the updated and expanded second edition. Click here for a sample!

"Yeah, so, none of that's really working for me. Anything else you want to show me, Mister Writer Guy? Or can I go play with my dog, now?" 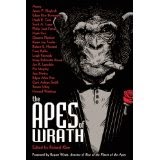 Boy, you're a tough nut to crack. Why don't you just head on over to my Amazon Author Page and browse the other things I've got listed there? I've got stories and essays and introductions in several books, and there's even a couple of comics for you to purchase if you want to go that route. For example, in The Apes of Wrath, I wrote an essay about the guys who play gorillas in the movies. It's a fun romp through that specialized world. And the rest of the book is really good, too! Fun Fact: Many of my books are also available as ebooks.


Granted, this isn't everything. I've got some projects in development, some stories which are scheduled to appear in books coming out later, and some novels in various stages of completion. If you'd like to keep up with me and you're not bored with Facebook, I've got an Author's Page you can follow. Optionally, you can find me over at Good Reads, where I am trying to be more active.  I'll keep on writing, if you keep on reading.
Posted by Mark Finn at 4:59 PM No comments:

If you were in grade school in the late seventies/early eighties and your name was Mark, and if you happened to be the class clown, then you were "Mork" until middle school.

Robin Williams was my first comedian. "Mine" in the sense that I took ownership of him. Sure, I listened to my mother's comedy albums (Kids: Google "album"): Lily Tomlin, Flip Wilson, and especially Bill Cosby. Great stuff, all, and very funny. But Robin Williams was the comedian that I discovered myself, first on Happy Days and then in Mork & Mindy. My god, he was funny. I don't know if the act holds up, but at the time, there was nothing like him to be found anywhere else.

Because of Williams' performance as Mork (and mostly any other comedy role he ever took) I learned about improvisation, the art of the ad-lib, and best of all, he re-introduced the world to Jonathan Winters.

I was fascinated by him. That stream of consciousness babble of ideas, each one spilling out on top of one another... Of course, later, I found out that was the cocaine talking, but even when he quit doing blow, he was whip smart, and his observations were sharp and funny.

Over the years, his vast movie career has been a series of ups and downs. Lord knows, I haven't liked everything he ever did (Kids: Google "Hook"), but it's only because when he was on, he was brilliant. It made the lame projects stand out in sharp relief.

I kind of want to talk about Popeye right now. I know not everyone liked it, and it lacks, well, a lot in terms of what people were expecting to see. But as far as recreating Thimble Theater (E.C. Segar's strip in which Popeye appeared) goes, it was pretty good. For recreating the Famous Studios cartoons where Bluto is always grabbing Olive and saying, "Hey Doll, Howzabout a Kiss?" the movie was a flop. However, when I'm in the right mood, I love the movie. The art direction is brilliant, the characterizations are fantastic, and to my chagrin, I even like the songs. Mind you, if you ever ask me my favorite comic book movies, it will never be on the list. When I watch it, it's because I'm feeling nostalgic for the early 1980s.

So much of how I approached being funny was tied up in trying to figure out what made Robin Williams tick. Dropping instantly in and out of character and being able to sell a bit onstage are about as far as I got. No one put stuff together like him. His timing, along with his ability to economically cut out everything that didn't look like the joke, was his singular gift.

I was there for all of it. His HBO specials, his early critical acclaim, his later critical acclaim, his transition to elder statesman, all of it. I hated it when I didn't like a movie he was in, or the film was bad, or whatever. I wanted to like everything he did. And looking over his incredible resume, I liked way more than I didn't like, and you can't ever say that a .500 batting average is a bad thing.

In the back of our minds, I think we all knew there was something wrong; he was laughing to keep from crying. We could certainly see it in his sobering film roles, or the occasional interview where he's not climbing over the furniture. That razor sharp observational humor cut both ways, and sometimes, you'd see it nick a wrist. I've seen a lot of references to the old joke with the punchline, "But Doctor, I AM Pagliacci," and I think that's apt, and sadly, very prescient for a lot of performers, writers, and actors. Some people need the energy to thrive, and some need the energy to just keep their heads up.

I don't know about all of that, really; it's pure conjecture, and I don't know that we'll ever really know the whole story. I don't know if I want to. In the last few years, I had noticed when he had a heart attack, got divorced, and then very recently, went back to rehab. Those things were happening a little too close together, and I was actually saddened and concerned. Then this. It feels like someone just slammed the door on my childhood. I never met the man, but he's a part of my humorous DNA.

I hate that he felt he was out of options. I don't know if anyone knew how much pain he was in. All the laughter--the belly-aching, side-splitting, howling and crying laughter, and all of the cathartic tears and genuine anger, rage, and sadness, he brought out in everyone over the years, and it still wasn't enough.

Go listen to Marc Maron's very poignant eulogy and rebroadcast of his interview with Robin Williams on his WTF podcast. He really nailed down a lot of things for me, and if you're struggling to cope with this, his words may help you, too.
Posted by Mark Finn at 12:14 AM No comments: