Blue Bloods is My Blue Kryptonite 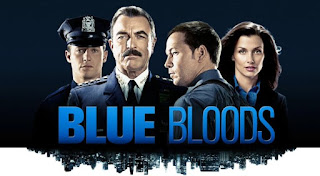 Netflix dropped me a line that the new season (last season) of Blue Bloods was available: Season 7, for those of you not keeping up. Seven seasons of this show, with the Season 8 waiting in line. For the few of you who don't know about this, here's the bullet description from TV Guide:

A New York crime drama focusing on a multigenerational family of cops that includes the city's police commissioner, his two sons and his retired father.

It's on CBS, and they are known for doing pretty good cop shows. And while I generally like police procedurals, I was initially interested because Tom Selleck is in the show, and I think he's an under-rated actor who gets judged by his mustache too often.

So I started watching it, and found it to be very problematic, for a number of reasons. As of the end of Season Seven, I find they have not solved nor addressed any of my concerns. They are as follows:

1. Donnie Wahlberg? I know he's found another career, Post-New Kids on the Block, as an actor, but I cannot...CAN NOT...let that go. I want to, desperately, but I look at him and it all comes rushing back, a technicolor MTV stream of consciousness nightmare. "The Right Stuff," indeed. Oh, and on the show? Donnie plays Danny. It's like they weren't even trying.

2. I can't get over how much Bridget Moynahan looks like the missing Judd sister, after Ashley. It's not fair, I know, but there it is.

3. The much-lauded "Dinner Table" scenes, where the show's weekly conflict is spelled out for anyone who hasn't managed to pick up on it yet, and all sides of the issue are discussed, but never really solved. Not unless that solution involves...(see next)

4. The Cops are Always Right. I know, the show is called Blue Bloods, not Doing the Best They Can Bloods...but that's the eternal defense they play on the show, all the time. We're not perfect, but we're doing the best we can. Maybe the Reagan family, led by Patriarch Tom Selleck is, but we see in every episode people who aren't so good, or are introduced to a situation where someone cut a corner, or did it wrong, or didn't do anything at all.

5. Any grievance against the police is always framed from a position so extreme, it's by DEFAULT the "bad guy" or the antagonist scenario. For example, a woman was mad because her son got killed and the cops haven't caught the shooter. So, her solution is to ambush the police commissioner and scream at him for not knowing the details of the case. So much so, and with such vitriol, that we're programmed to not like her, because, HEY, LADY, he lost a son, too!

Oh, and sidebar: the first two seasons dealt with the aftermath of the eldest Reagan son dying at the hands of a crooked cop. After that, the series' harder edges were considerably blunted, and even though the show makes lip service toward dealing with Black Lives Matter and NYC protests (in stories "ripped from the headlines," presumably), the shows are so overwhelmingly PRO-COP that even the legitimate grievances seem extreme. It's almost a pity party, because "no one understands what they go through." On a cop show. Where they always get the bad guy. And have hot partners and great loving families. Methinks the lads doth protest too much.

6. For a show with built-in novelty of having a dad and grand dad who were around in "the good old days" when you could get free coffee and beat on suspects, to the upstanding youngest Reagan who has a law degree and passed the bar, but decided to be a beat cop instead so he could make a real difference (with the sister working in the D.A.'s office, and young kids for the "youth perspective") this show could do so much more with the format than have people simply yell at Tom Selleck, which happens nearly every episode. Oh, and no one likes the Reagans. As a family, in New York City, they get it from every direction.  I really want Selleck to shoot someone in season 8. Because they need killing. Quigly Down Under style.

It's a weak show, as cop shows, go, but there's something about it that makes me nearly compelled to watch every episode. It's a cringe-watch, to be sure, but I can't help myself. Maybe it's because they''ve managed to employ as many actors from The Sopranos and The Wire as possible; Maybe it's because for all it's faults, most of the characters are likable (yeah, even Danny/Donnie); maybe because I am hoping--to my own detriment--that the show will take a turn and come down on the side of Doing the Right Thing without making protesters look like screaming assholes that should be hosed down; maybe because I just like watching Tom Selleck drink bourbon and glower through a really tough decision; maybe because I'm hoping the Bridget Moynahan and Steve Schirripa (Erin and Anthony) are going to get together (forget "Jamko." It's not going to happen, and if it does, it'll ruin the show just like on Moonlighting).

Maybe it's just Summer, and I'm miserable in this heat. And as they say, Misery Loves Company.