Last week, a lot of mediocre plot lines and sketchy character motivations were moved around so that The Flash and Supergirl could have a musical crossover. Like most of these CW things do nowadays, the last 30 seconds of Supergirl bled into the entire episode of The Flash, interrupting at least one fairly interesting storyline so that the very charming Grant Gustin and likewise charming Melissa Benoist could sing and dance and make the Internet explode.

It was a terrible episode, and not even the admittedly cute song about "Super Friends" in the middle could save it. Not Jesse L. Martin, a Broadway song and dance man, nor Victor Garber, on loan from the terrible Legends of Tomorrow show, could save it. It was a wasted hour of television. And I blame fandom for it.

Yes, you. Don't look at me like that. This is all your fault. Enough with the singing, already. We DO NOT need a musical episode of every single one of your favorite shows. You might think you do, but you don't, and I can prove it.

This whole thing started with Buffy the Vampire Slayer, another show I never really liked to begin with. I know it was popular, and I tried to like it, really I did. But it never grabbed me. I got why you liked it, though, and so I never, ever trashed it.

But then, "Once More, With Feeling," aired, and suddenly, it's all any of you could talk about. How cool it was; how the songs all were part of the story; you know, like a real musical. Personally, I avoided it for years, because, you see, I'm not fan of musicals to begin with. I do not care for the conceit, nor the artifice, that goes with accepting a musical as a storytelling medium I wish to participate in. There are some musicals that I like, despite the way the story is told. Usually it's the subject matter I like more than the singing, but not always. The point is, I'm very particular about what musicals I like and why. And, I figured, since I didn't like Buffy to begin with, I would not like the musical.

I watched Dr. Horrible's Sing-along Blog, and I loved it. Mostly because it was a story that interested me. On the strength of that outing, I watched "Once More, With Feeling." And I got it.

It's a great episode, truly. It's completely rooted in the ongoing story, and in fact, uses the trope of singing inner feelings out loud to actually affect and change the ongoing subplots. That's good writing. That's inspired storytelling.

And you loved it (oh GOD, did you love it). Many of you loved it because you got to see these actors you admire singing and dancing. And they were good at it, too (well, most of them were). But that's not the real reason why you were so taken with it.

You liked it because it was a complete and total surprise. You didn't see it coming, and even after you got used to the format of the episode, it threw you a couple of curve balls. Remember, this was deep into the Buffy seasons, and you were already along for the ride. But this one episode caught you off guard. And it deserves all the praise it gets, because it got there first and squatted down. Not first in Television History, mind you; many other shows did a similar gag. It's just that it was the first time since, what? Moonlighting, in the late 1980's?  Plus, Buffy was Geeky/Sci-Fi TV, which normally is too busy taking itself seriously to bother with singing and dancing.

The problem with a musical episode of Buffy is that it's so brilliant, so good, you can't ever really use it again, not for a long time. It's too original, too wacky. Whedon did something so novel that he kind of owns that idea, at least for a little while. And trying to shoehorn it into every other show you love only cheapens the real work that Whedon did.

You loved the surprise, but you mis-identified the reason. The change-up, the unexpected, the curve ball: That's what you loved. That the curve ball was a musical episode has only led tens of thousands of you to start asking, no, begging, other shows to "have a musical episode," regardless of whether or not it wanted one, or even needed one.

And this is why we can't have nice things. If you want to be surprised more often, insist on better writing. Ask for what you really want.

I will now take questions from the audience:

1. But Mark, you loved the Musical Sequence from Agent Carter, you big hypocrite, what gives?
I'm glad you brought that up. Let's clarify.  The musical sequence you speak of was actually a dream sequence. Specifically, it was the opener to a show after Carter had been knocked unconscious. It wasn't the whole show. It was, maybe, five minutes, at best. And it didn't tell us anything we didn't already know. It was literally an "Opening Suite" style recap of the previous 5 episodes. So, the producers were able to get a little residual mileage out of the "musical" idea without stepping on Buffy's toes.

2. You don't know what you're talking about. I actually LIKE musicals, okay? And I want to see more of them.
Good. Go watch all you can find. Just please stop asking that they be inserted into shows that have no business doing them. Do you have all of the episodes of Glee? How about Galavant? Crazy Ex-Girfriend? No? Then get cracking, sister, and then hit YouTube up when you're done. There's stuff out there for you to consume, and I'll make you a promise here and now: I won't jump into every Crazy Ex-Girlfriend discussion and say, "You know what the show really needs? Overly-emotional DC Super heroes! That would be SO COOL!"

3. But I'm a fan of [Name of Actor With a Good Singing Voice Goes Here]. I used to watch them on [Name of show on Netflix Goes Here] all the time. Why can't I have have them singing in THESE shows, too?
Don't be selfish. Also: ask for what you really want, what you really, really want. If you want to hear Jesse L. Martin singing American Standards with a piano accompanying him, then ask for that. If you want to hear all of the Broadway actors from these CW shows singing together, then encourage another writer's strike, so that everyone will have room in their schedule to do something original, that doesn't use these characters or situations. I'm confident that "Super Friends" is already on the Internet for .99 cents or less.

In closing, let me say this: we all watch a lot of this stuff. And we get really good at sniffing out the regular beats in the story, the formulas, the over-used plot points. You don't have to watch things that bore you, no matter how much you've already watched. Likewise, you can ask for things that will surprise and delight you. That's your right as a consumer. But when you keep asking for the same old thing, you run the risk of diluting the coolness of the very thing you love.
Posted by Mark Finn at 12:17 PM No comments:

Email ThisBlogThis!Share to TwitterShare to FacebookShare to Pinterest
Labels: Buffy the Vampire Slayer, geek culture, Glee, music, Musical Episode, Supergirl, The Flash, This is Why we Can't have Nice Things

10 Things You Probably Don't Know About the Vernon Plaza Theater (#3 Will Shock Your Face Off!)


A lot of people have heard about the Plaza Theater a Vernon Institution for sixty-four years, but just as many have heard the wrong information, or worse, no information at all! Here's the facts about the place that was voted Best Movie Theater in Vernon for 9 years in a row! 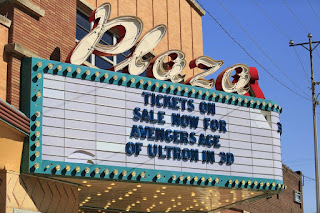 10.  The Vernon Plaza Theater is open seven days a week! That means you can see movies on Tuesday night, or Thursday night. As long as you have one day off a week, you’ll never miss a movie.

9. The Vernon Plaza weekly movie schedule is available in the following places: In the Vernon Daily Record, on Facebook, on Twitter, on the Vernon Plaza website, hanging on the Ticket Window, recorded on the Movie Line message, in email to group members, and hanging at select locations like Tyson’s Foods. If you don't know what movies are playing at your local movie theater, that's something only you can fix. 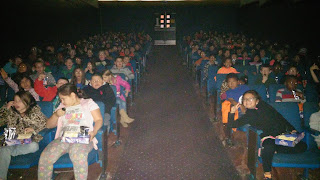 7. You can rent the Vernon Plaza Theater for birthday parties and special events. It’s super easy! Simply come by during normal business hours (after 5 PM on weekdays) and pick up a Party Schedule form and talk to Mark or Cathy. The Vernon Plaza Theater is also available for schools and churches for field trips and other special screenings.

6. The Plaza Theater hosts several special events every year that are tied to movies, advance screenings, and community engagement. They give away posters, comics, door prizes, and donate proceeds to various charities throughout the year. Did you miss Dino-Week? The Speed Racer Hot Wheels Race? 13 Days of Halloween? Dinner and a Movie nights? Free movie nights sponsored by the Vernon Daily Record? They do things like this all year long.

5. The Vernon Plaza Theater recently upgraded to fully digital projection and 5.1 Dolby stereo surround sound. The picture is gorgeous! The sound is amazing! You won’t believe the difference.

4. Movies in 3D! The Vernon Plaza Theater was the first 3D movie theater in Texas. And now, thanks to the new digital projectors, 3D movies are back! And not the kind of 3D movies that give you a headache, either (thanks, Altus!). This is the best 3D system in the area. If you get a headache watching a 3D movie at the Vernon Plaza, we will give you a ticket for the same movie in 2D, no extra charge. It's our guarantee that you'll love our awesome 3D system once you try it for yourself!

2. And speaking of money, the Vernon Plaza Theater now takes credit cards. You can pay for tickets, concessions, gift certificates, and more with a single swipe.

1. The Vernon Plaza Theater has been operating under its current owners for TEN YEARS!  If that alone doesn’t earn them your trust, then I don’t know what will.

And this doesn't even cover the extras: Mark's ever-changing action figure display, Cathy's hot cocoa in the wintertime, the Plaza's Internationally-renowned Movie Popcorn with real butter, or any of the other little touches that make the Plaza a unique place to visit.

Forget what you've heard. Forget what you thought you knew. This is the New Vernon Plaza Theater. Going Strong and getting better for Ten Years and Counting.
Posted by Mark Finn at 4:10 PM No comments: