The Backlist Project is Nigh Complete

I love that word, "nigh." It's so delightfully Biblical to me. But that's not what we're here to talk about. Bowen's Bluff, the second Sam Bowen volume, dropped this weekend in paperback form. I'll have the ebook figured out soon. That leaves only one book: The Third and final Con-Dorks volume, One in a Million.

I've needed to rescue and resuscitate my backlist for years now. I was all set to do it a couple of years ago, but I went and wrote a bunch of comics that, as it turns out, will never see the light of day. Ah, well. Sometimes you back the wrong horse, you know?

Once One in a Million drops, next month, that'll be it. I had seven books that needed to be reprinted and updated for ebook consumption. There's eight because Fight Card collection, The Adventures of Sailor Tom Sharkey, slipped in there when no one was looking.  Not that I'm complaining. I love the book and I'm happy those stories have found a collected home.

I never started this project to make money. Well, let's back up: I didn't publish all of these books to get rich. I fully expected to make a little dough off of the endeavor. And so far, that's exactly what's happened; a little dough. Twenties of forties of dollars. A couple hundred and change, truth be told. I did it so they would serve as a backdrop for other, more recent work coming out this year (and hopefully next). I've got NEW books, see, and they will need some love. But in the meantime, let's see what we can do about this stuff, shall we?

Let's do a contest: I've done some review trawling from you before, but now I'm upping the ante with genuine loot from the past. Collectible, interesting stuff, at that.

I'm a once and forever member of Clockwork Storybook, a writer's collective that was founded by four people: myself, Matt Sturges, Chris Roberson, and Bill Willingham. We started out as a writer's group to work on our prose, and quickly decided we'd get a lot better, a lot quicker, if we learned how to write fiction in front of a live audience. So, we created a fictional city, San Cibola, and made a shared world out of it. The "online magazine" was updated monthly, and sometimes more frequently, as we were prone to pulling a lot of stunts like 30-day Novel challenges and the like. Our goal was to eventually transition into a print medium, and in this regard, we were only about 10 years ahead of the trend.

One of our first projects was a series of chapbooks, designed to get our beaks wet for page layout, printing, and all of that complicated stuff. Our first one was called Offline Volume 1: Mythology, and it featured an original prose story from each of us, not available on the website, with illustrations by our friends. This was our calling card as we started making the rounds at Texas conventions. We sold hundreds of these things. Not thousands, but definitely hundreds.

Now they are all but gone. I've got five spare copies of Offline Volume 1: Mythology to give away and I will do just that. All you gotta do is pick one of my books that you have read over this past year and post a review somewhere that you can point me to it. Amazon, Good Reads, wherever there's decent traffic. That's it! I'll pick my five favorites and send you a rare piece of Clockwork Storybook history. I will even sign it, if that's your bag, baby. Once you have the review up, shoot me a Tweet or an IM or however you get ahold of me, and point me to where it is. I will in turn contact you for mailing instructions.  How does that sound?

Just to sink the hook a little deeper, here's the Table of Contents:


Mythology by Bill Willingham
illustrated by the author


Okay, that's all you need from me! Review! Review for your lives!

I figured out where all of the misogyny and bald hatred in the comic book industry is coming from. I'm ashamed to say, it's coming from my generation, Generation X, the fans in their forties and thirties. Oh, it's possible, just possible, that there are a few twentysomethings piling on--Gen Y entitlement can be palpable and for some doughy white guys in the suburbs who might still be living at home with indulgent parents waiting on them hand and foot, these "attacks on freedom of speech" might actually seem like that and not what they really are: a widening of the communal pool. But I digress. 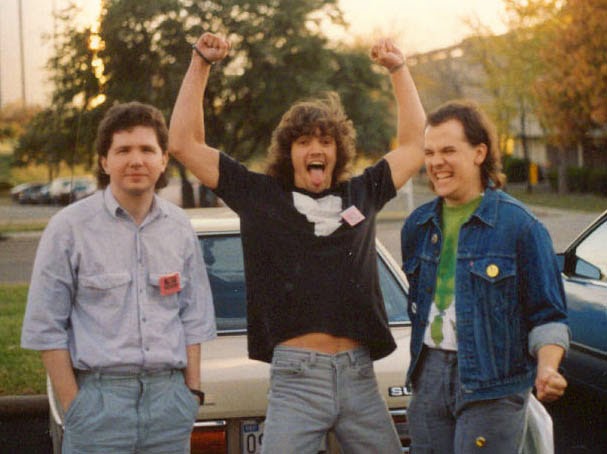 I figured it out. I figured out where it started. Because it had to start somewhere, right? I mean, there was a time when we were all new to this, and the world was a much larger, more inclusive place. We used to be innocent, if not ignorant, and all of these conventions were full of fellow fans. We could make new friends from other cities and states who liked the same things that we liked. If only there were girls here, too, that would make it all better. That was myth number one, right there.

There I am, on the right. We were so young. So hairy. Reading comics, drawing comics, talking about comics. It was our life. 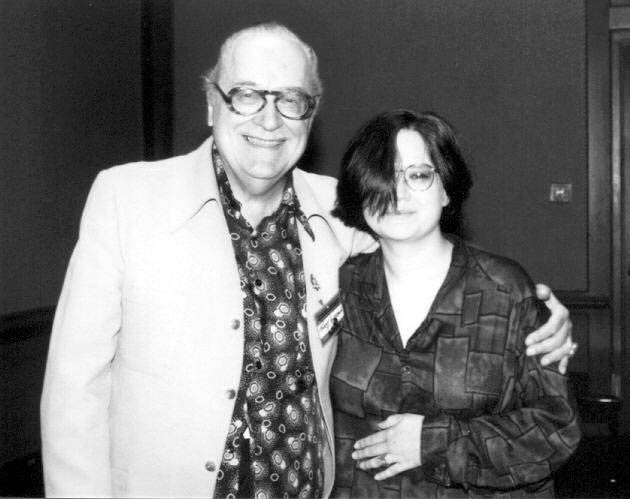 This is my friend, Melisa. She was one of us. An artist, really talented, and into movies, comics, art, and all of the other things we liked, too. She was one of us in the "Let's Make a Loving Cup!" kind of way. We adopted her and she starting drawing with us on Sundays and hanging out and painting and going to movies and conventions and it was just not a big deal. This is her with Forrest J. Ackerman. Her hair is over one eye because she was too freaked out to say anything to him. She was a huge fan. This was taken in the early 1990s, by the way. Before the dark times. Before the Empire.

I mentions Melisa only to show that there were, even back then, Pre-Internet, women in the hobby, if not the industry. And you could be friends with them and nothing bad would happen to you.

Sometime around 1992 or 1993, the lawyers started patrolling San Diego ComicCon with suitcases full of money. Comics became Big Business. About the same time came the professional convention booth staff. Booth Weasels. Sometimes known as "Booth Babes" or "Booth Bunnies." These are the people who smile, greet you, and then give you the knickknack or the spiel that they were told to hand out to everyone who walked into the booth. It's a professional gig, like waiting tables or hospitality and hosting. They get paid to do it.

There's just one problem. These people--these women--were at a comic book convention. And so, to make sure that these media companies and Dot-Com companies and fly-by-night comic book companies and movie studios had the full attention of the doughy white guys in attendance, they staffed their booths with attractive women and put them in go-go boots and mini-skirts. Skimpy outfits that let the cleavage hang out. Because men are pigs and easily distracted, see. 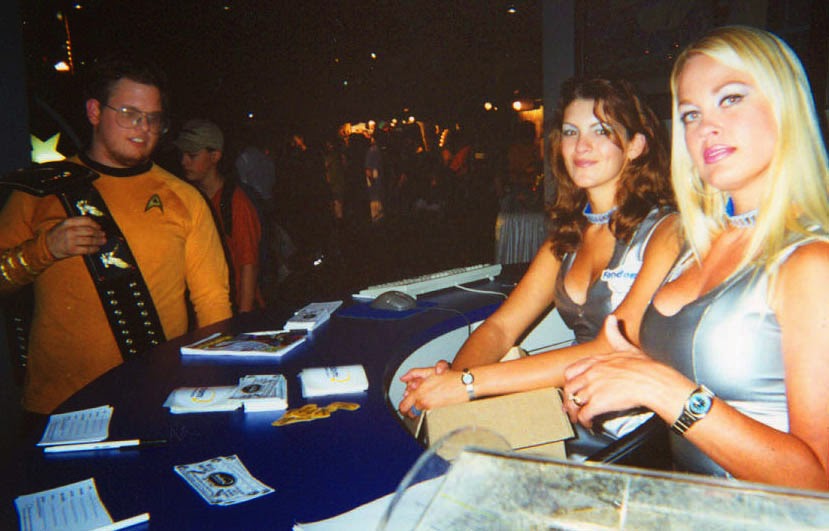 Now, I'm sure not everyone who noticed this phenomenon thought for one second that these people were anything other than Booth Weasels. Some of us, in point of fact, were a little bit insulted. I mean, how immature do you think we are? Well, they knew something that we didn't, because a lot of man-children still have swag in their collections from companies that never made a single TV show, or comic book, or, hell, anything, before they went under as the Dot-Com bubble burst.

But the Booth Weasels remained. And I'm willing to bet you a million dollars here and now that every single one of these freaked-out, doughy, entitled, white guys who are braying like sea lions about Social Justice Warriors and women in costumes, and political correctness and all of that other meaningless bullshit--every one of them--made a pass at one of these booth weasels and got shot down, told that they weren't into comics, or just simply politely refused in some way. Much like what happens when one goes to, say, a Hooter's and tries to pick up the waitress, and gets told no, as well.

I promise you these whining slugs are still nursing the sting of rejection from some perceived slight that goes back to a convention experience circa 1994-1998. They were so busy being angry that the cheerleaders turned them down that they didn't notice the room filling up with band geeks behind them. Now, whenever they see a costume with cleavage, or see a woman saying they love comics, they react like Frank Burns on M.A.S.H. "Oh, ha ha, very funny!" when in fact, no one made a joke. No one was teasing them. But they don't see anything outside of their personal hurt and shame.

That's what all of this sounds like to me. Nattering nonsense from jilted man-children who tried out their A-list Monty Python impressions on the out-of-work-actress hired to be Catwoman at the San Diego ComicCon DC Comics booth in 1995 and she don't know who Monty Python is, and so now ANYONE dressed like Catwoman must be just like the one woman who said no to them once. They're like Dwayne Wayne from Die Hard. They're like Dickless from Ghostbusters. They can't change their narrative because they can't see the world any other way.


By the way, the electronics conferences are now banning "Booth Babes" and guess who's all up in arms about it? Yep. The same doughy white guys.

I'm ready to begin my campaign of publicly shaming any man who is still stuck in the 90s comics scene. It may not change them, but it'll at least give them something new to hate on, so that maybe we can get back to all moving forward into the 21st century.
Posted by Mark Finn at 11:40 AM No comments: