This is my WorldCon Schedule

It's a lot of stuff, but in my defense, a big chuck of it is all Robert E. Howard-related. The rest is a mix of groups, receptions, and clutches of things I've done with other people, and a few panels that have nothing to do with REH. Oh, and a beer session, a reading, and an autographing. Fair warning: I will be in huckster mode during this convention, in that I'll have stuff for sale and it'll likely be on me at all times. Nothing too expensive, mind you: the Tinglers are only two bucks a piece, for Pete's sake. Twelve dollars is the upper limit. So, I'm selling, but it's all AFFORDABLE, see?

Enough of that. Here's my schedule for WorldCon, and I'd appreciate any prayers or good vibes. I'm gonna need it to get through all of this!


The First Barbarian of Texas: Conan the Cimmerian
Thursday 12:00 - 13:00
For over 80 years, Conan has ruled the roost as the literary and pop culture definition of "barbarian." What makes Conan so popular in and out of the U.S., with readers and film-goers, and fans of all ages? Is his reign likely to continue into the 22nd century?

You Don't Know Jack about Bob: What's New in Robert E. Howard Studies
Thursday 13:00 - 14:00
If you read the Conan paperbacks in the 1970s and 1980s, but haven't checked out what's been going on in the wild world of Robert E. Howard since the Millennium, then you have missed out on a lot! In the last decade there have been new biographical discoveries, new authoritative editions of Howard's work, and so much more. Come get caught up with some noted experts.

The Apes of Wrath!
Thursday 15:00 - 16:00
Join Rick Klaw and his cadre of authors as they discuss the idea of a literary ape anthology and how it all came to be.

Reception & Readings: Rayguns Over Texas
Thursday 18:30 - 20:30
This reception is the launch of Rayguns Over Texas, a new anthology edited by Rick Klaw and published by the Fan Association of Central Texas. Note: This event will be held at the central branch of San Antonio Public Library.

Barbarian Days: Starring the BNFs of Howard Fandom
Friday 13:00 - 14:00
A warm-hearted documentary about the annual celebration of Robert E. Howard and the devoted fans who make the trip to Cross Plains, Texas, every year. Our film festival will be screening this film, followed by a discussion with the subjects of the documentary.

Two-Gun Bob: The Somewhat True Tales of Robert E. Howard
Friday 16:00 - 17:00
Writing a biography is an inexact science, and it's made all the more difficult when the subject in question was less than truthful about what they chose to tell other people about themselves. Four Robert E. Howard experts will shatter long-standing myths about Howard's life and talk about how they separate fact from fiction when writing about REH.

Gorillas in Science Fiction: The Encore Performance!
Saturday 19:00 - 20:00
You've heard about it for years! Now it's back for one final presentation you do not want to miss! There is no movie that cannot be made better by the judicious application of a gorilla. Examples abound, and you'll get a ringside seat when our panel discusses the best -- and the worst -- of simian cinema, and celebrate the 80th anniversary of the film that started it all, KING KONG!

The Wild, Weird, and Wonderful Westerns of Robert E. Howard
Sunday 13:00 - 14:00
At the end of his life, Robert E. Howard was making good money writing humorous, and also very dark, westerns. In fact, westerns abound all throughout Howard's short, intense career. Our panelists talk about everything from the hilarious Breckinridge Elkins series to the deadly earnest story, "Wild Water."

Robert E. Howard at the Ice House
Sunday 18:00 - 19:00
Howard was an amateur boxer, and wrote mountains of boxing stories. No kidding! Here's a rare opportunity to hear about the boxing canon of Robert E. Howard from the editors of the FOUR VOLUME series currently being published by the Robert E. Howard Foundation Press. Warning: attending this panel may cause an outburst of laughter, followed by a burning desire to read Howard's boxing stories.

Comic Book Movies: From the Page to the Screen
Monday 10:00 - 11:00
There have been more comic book movies in the past decade than in the entire 20th century combined. How do they hold up? What are the best and the worst examples of a successful transition? Our panelists draw comparisons (and maybe even blood)!

What Am I Bringing to WorldCon?

What an excellent question. I'll be in San Antonio, Texas, for a full week, and if I'm not loading or unloading enough stuff for a whole exhibit (see below), I'll be running around like a goon, from panel to panel. There will be eating and drinking, for sure, but over the years, I've gotten pretty good at knowing my limits and packing accordingly. Like many preppers, I too have a pre-built bag that I throw in the car with me at a moment's notice. The main difference is that I'm actually going to USE all of the things in my bag, because it's set up for a big-ass convention and not the Zombie Apocalypse...even if those two things have an awful lot in common.

I will likely be adding to this list, but for now, here's what my punch card looks like:

LUGGAGE:
This is important. For some reason, the con staff prefers that I wear pants. Pfft. Whatever.
--Peripherals (laptop, Ipad, smart phone)
--Extra socks
--Extra T shirts (it WILL be hotter than a kiln in San Antonio)
--bathing suit (in case I get a chance to hit the hot tub)
--toiletries (normal sized ones, at that)

TRAPPINGS OF THE PROFESSION:
This is also important. Thanks to the trusty Ipad, I can use it as a second brain.
--all of my readings on the Ipad
--extra business cards (I treat these like ninja stars and fling them in clusters)
--extra pens (both gel and sharpie, because you never know what people are going to ask you to sign. I once had John Hollis, a lovely British character actor who played Lobot in The Empire Strikes Back, sign the side of my head. One day, I hope to sign the side of someone's head. And so, the Sharpie.)
--traveling cables for cell phone, Ipad, and laptop
--a flask (for the necessary sips of adult beverages throughout the day)
--My Copy of Lone Star Universe (so I can get T.R. Fehrenbach to sign it. He's showing up for a panel on Alternate History Alamo stories. Genius!)

SURVIVAL:
Over the years, this part of the kit has gotten bigger and bigger. When I was sixteen, it simply said "Masking Tape." Now it's a separate shopping list.
--moleskin (for blisters)
--breath strips (con food is disgusting)
--Aspirin (no explanation necessary)
--Alka-Seltzer (see above)
--NyQuil (to offset Convention Crud--and also, to knock me out)
--energy bars, high in protein (for between panel boosts)
--multi-vitamins ("for men" which is code for "the prostate.")
--EmergenC (you know, that fizzy stuff that you gulp down with water?)
--a refillable Nalgene Water Bottle (critical to survival)
--Fisherman's Friend throat lozenges (because, let's face it, I'm a talker)

CURATING:
I'm in charge of the Robert E. Howard exhibit in the main hall. It's flattering to be asked, but the amount of stuff I'm driving to San Antonio is starting to overwhelm me. This will include:
--select items from the REH collection at the Cross Plains Library
--select items from the vaults of Paradox Entertainment
--select items from my personal collection
--select items courtesy of Dark Horse Comics
--a plastic warhammer (I don't want to get rough with any of you, but still...)
--at least one bottle of special libations to be shared as the weekend unfolds


LOOT:
There will be Mark Finn related merchandise on hand at WorldCon. The 2nd edition trade paperback version of Blood & Thunder will debut there at the REH Foundation Press table, and at a reasonable price, in case any of you would like to see the new book. Joe Lansdale, who wrote the introduction to the book, will be onhand as well, so you can get both of our illegible scribbles on your book.

Also premiering at WorldCon is Ray Guns Over Texas, an anthology of Texas science fiction edited by Rick Klaw, and I just so happen to have a story in that book for your edification.

Some of the dealers will no doubt have copies of the other books I've done for Dark Horse, Wildside Press, Monkeybrain Books, and others. But if you're coming to see me, it's best to bring copies of what you own, if only so that you can embarrass me. 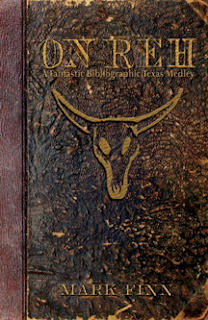 -- a few copies of Road Trip, my Cupid and Elvis novella (I'm very fond of that story) This is the "director's cut" edition, with slight changes and corrections. $12 each.

--36 signed and numbered copies of On:REH, "a miscelleny of ideas, observations and tomfoolery from author, essayist and raconteur Mark Finn. Learn exactly what REHupa is, and marvel at its complicated (and improbable) history with Finn pulling all of the strings; find out what happens to authors after they die; get a front row seat at The Last Book Sale; take a ride with Sailor Tom Sharkey and Kid McCoy to El Paso, Texas, and more!" It's a one of a kind item that will not be reprinted and it's exclusive to WorldCon.  Only $10 a copy!

--Tingler Larvae (you heard me. Tinglers. As in, Tinglers. Play your cards right, and I'll include some Blast-Ended Skrewt eggs, too)