Maybe you can see what the problem was, but just in case you can’t, I’ll tell you. Blogger A was arguing X, and Personality B was counter-arguing for Y. Gamer C was really incensed about Z. No one was approaching the subject with agreed-upon terms and criteria. Everyone was talking past one another. Oh, and the name-calling was a nice touch, too. This is why we can’t have nice things.

I saw a lot of people my age and older flip the table at the suggestion that they were racists because for the past forty-five years, orcs have been the default bad guys in D&D. “Why can’t we just play the game?” they yelled. “Why must you people politicize everything?” Setting aside how you might feel about that over-simplification, I think that, if we dial it back a few notches, there might be a useful conversation to have. But it can’t start with, “Um, okay, I think you should know that you’re part of the problem,” because that murders the discourse in its crib.

Let me try this as a way to get into the topic without anyone flipping anything. We didn’t perceive there to actually BE a problem with killing orcs back in 1984, because we were teenagers playing fantasy games, and we weren’t being asked to, nor did we suspect that we even could, examine the cultural implications of what that meant; For a lot of other reasons, but mainly because the game itself has had a moral and ethical compass baked into it (called alignment) that tended to render abstract the underpinnings of everything in the game. There was good and evil, law and chaos. Monsters tended to be evil. People, not really. But only, yes, actually, the players. Well, some players. Most players were good. But there was always that one kid that wanted to play an assassin. Or the bad guys who were humanoid necromancers and raised undead simply because they could. Their goodness or evilness was never examined, unpacked, or sorted through. These stories we were creating together were morality plays, fairy tales, penny dreadfuls. And orcs were bad guys, because they were in the Lord of the Rings, and even back before Peter Jackson, elves were cool and hated orcs and everyone liked them so everyone hated orcs via the transitive property.

If you tell me that Tolkien’s depiction of orcs is racist because the language he used to describe them is akin to racial stereotyping or propaganda, I won’t debate you. I don’t have a horse in this race. I’m not, and never was, a huge Tolkien fan. Those books don’t figure into my creative DNA. I read them because as a D&D player, it felt wrong to not read them. So, go ahead. Throw him under the bus. It won’t matter, as his place in the canon is deeply and firmly entrenched. But, sure, yes, okay. Tolkien used them to make humans inhuman, and thus, easier to hate and easier to kill.

So, where does that leave D&D?

Well, the earliest depiction of orcs we were shown were basically pig men in 1970s D&D. Someone somewhere said there was a linguistic reason for this, but I don't want to chase it down. 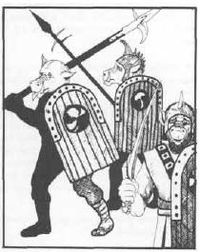 By the mid-1980s, the drift over into more humanoid-orcishness was happening. Here’s the image of orcs from the second edition of D&D, published in the 1980s. 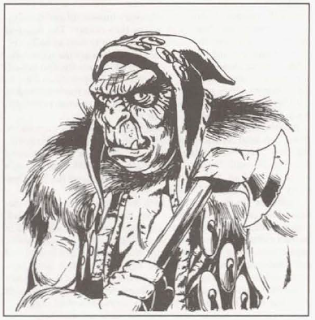 Games Workshop, meanwhile, was developing a wargame and rpg empire over in Great Britain called Warhammer and their orcs were goblin green and had mohawks and spoke with Cockney accents, like British soccer hooligans. Avocado green. Huge, comical underbites with huge, comical tusks jutting out.

Successive editions of D&D and other games followed suit, until we have the current depictions that run a full spectrum from scary to sexy. Anime kids, it seems, can fetishize anything. I'm not a fan of TVTropes for a large number of reasons, but this entry for Our Orcs Are Different does a good job of breaking down the nomenclature and the genus and phylum of orcs and orks and all other versions of same.

Over the years, I’ve seen D&D drift more and more into the lanes of playing exotic monster races, including goblins and orcs, as well as minotaurs, yuan-ti, and any other creature type that was perceived as a “monster” but intelligent and thus, capable of free will. Even the original “dark elves,” the Drow, are playable, alongside other races of humanoids from the Underdark. You can even play...*shudder*...cat people...if the DM will let you. Hint: I will not let you.

But D&D is still D&D, and that means at first level, you are probably going to fight goblins (Tolkien's other name for orcs, but let's not further muddy the waters). And when you’re strong enough, you’re going to graduate up to orcs. And then minotaurs, and medusae, and eventually dragons, demons, and so on and so forth. It’s how the game has been played forever.

Except, it hasn’t, not really. There’s no one way to play the game, as you will see if you join any of the hundreds of Facebook groups dedicated to D&D. There’s no one way, no “right” way, and there never has been. And moreover, anyone who says so these days is roundly shouted down, pilloried, and beaten with sticks. Every DM is different. Every game table is different. Fifth edition in particular leans into that assertion and customization of D&D is now a feature of the game.

One other note: D&D 5th edition’s artwork is an inclusive cornucopia of skin tones and, if not a fifty-fifty mix of men and women, at least a lot MORE women than in past editions, and no perceived class bias, either. The illustration for the Fighter is a black woman in armor, looking as cool and capable as any D&D player character could. This was largely applauded, and the current rules state that skin color and sexuality are open in the game and have no bearing on mechanics or the world itself. Humans are humans. Everything else is a player’s choice. 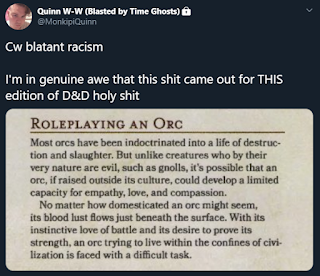 I must confess, and I realize that I’m opening myself up for this, but I read the original tweet that started the firestorm, and I think this is a non-issue. Or, rather, this is only as big a deal as you want to make it. This, right here? It was  two paragraphs from one of the supplemental books called Volo’s Guide to Monsters. This is a book you do not need in order to play D&D. It’s not part of the core of rules. It’s optional, an add-on, non-essential. You have to seek this book out.

One of the main features of this book was taking many of the humanoid races that have been deemed “monsters” and opening them up for role-playing by players. Those two paragraphs are immediately followed by the background traits tables that all players use to flesh out their D&D characters. They include personality traits, bonds, ideals, and flaws.

It seems to me that whatever orcs maybe used to be, they aren’t really that now, and that's been 100% by player choice, and if the rest of the 10-page entry on orcs and not just the two paragraphs above are any indicator, this is supported by the game itself. I’m not saying that orcs maybe aren’t differently problematic for some people, but I think it might be worth acknowledging what D&D got right this time before you tell the 40 million people playing it that they are doing it wrong.