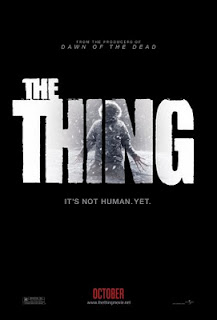 For Halloween, I watched The Thing (2011), followed immediately by The Thing (1982), which appears to be intuitively how the movies are meant to be watched. This new film has caught some flack because, people have argued, there was nothing wrong with Carpenter's film that it needed to be remade. I agree, of course. Carpenter's Thing is one of my favorite horror movies of all time, and one of my most memorable scares during my formative years.

I was 13 in 1982. Living in Abilene, Texas, I was as far away as it was possible to be from any kind of geek gathering place. We had a magic shop that had recently closed down, but no comic book store. Only the local hobby shop carried any Dungeons and Dragons stuff, and even then, it wasn't a place to gather and talk to other people. Anything you wanted to know about, or become knowledgeable about, you had to find for yourself.

One of my sources for things like horror movies, special effects, and the like was the fledgling Fangoria magazine. It was literally a lifeline for me, keeping me abreast of upcoming movies, talking to directors about the film, showing special effects pictures, and all of the stuff we now get on the Bonus chapters of our DVDs. I had read about The Thing in Fangoria, and also about John W. Campbell's short story, "Who Goes There?" and Rob Bottin's insane, out of control make-up effects...well, I just HAD to see it, you see. Rated R? Not my problem. We had HBO, and oftimes, if I was lucky, I could get downstairs late at night and watch whatever I deemed essential to my education.

So, I'm downstairs in our old, weird, and even haunted house. I'm in the last room, at the farthest end of a long hall that curved around to the staircase, which curved back around and led to my room. My door faced the stairs. Make a note of that. We'll come back to it. The second floor landing fed into a hallway with the bannister on one side and a bookshelf wall on the other. Anyone from the rest of the bedrooms could walk out into this hallway and look down the stairs from the railing. Anyway.

HBO decided to air The Thing at 10:35 late one Friday Night. I crept downstairs, stealthily turned on the television, and absorbed the movie the same way that the Thing absorbs other humans. It got under my skin; what can I say? Well, the movie is over now, and that Duhm Duhm soundtrack is throbbing, and I cannot BELIEVE they ended the movie like that. I mean, Childs could still be a Thing! Even though he probably wasn't...they were going to freeze to death, man! It was my first ambiguous ending, and as the possibilities rolled around my head, suddenly, my step-father, Paul, appeared in the doorway to the den.

"What in the hell are you doing up?" he demanded.

"Nothing!" I said quickly, trying to catch up with the heart attack he'd started from his sudden appearance.

"Get upstairs and go to bed."

"You go first," I shot back, with zero insolence in my voice. If anything was waiting, he'd get it first. It was pragmatism.

He sighed and stomped off. Only then did I realize my error. I could've had an escort back down the long, dark hallway, but instead I sent my safety net ahead of me and now he was snug in HIS bed, leaving me all alone...in the dark...

Mind you, I only did this once. I learned from it, to be sure. But let me say to you that it is possible to make that hallway, turning the lights on ahead of you and off behind you as you go, at a dead run.

At the top of the stairs, I literally dove, John Woo-style, into my room, grazing the door knob as I jumped, allowing it to swing closed behind me. My reading light was on, and I had an instant to contemplate that my bed, to the right of me, was just the right size for, oh, I don't know, anything, to be under it.

I leapt up, straight up, and transversed horizontal space like a sixteen-bit character to land smack-dab in the middle of my bed. SAFE! I pulled covers up all around me, and kept the light on, and man, I was NOT moving out of that bed.

The next morning, at breakfast, with the scares over (well, mostly), I looked at my family as they munched on eggs and bacon and thought, how well do we really know anyone? 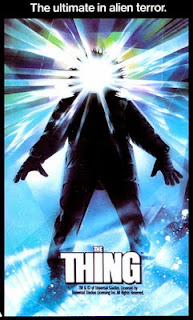 So, naturally, The Thing is one of my favorite horror movies. I've seen it dozens of times. Kurt Russell is still playing John Wayne for Carpenter. David Keith is awesome as Childs. Wilfred Brimley! Come on! What's not to like? The paranoia, the intrigue, and of course, that monster... In John Carpenter's now-very spotty ovure, this film is a stand out and one of the few things that keeps his reputation from being totally a washout.
You can imagine my distress (and I suspect some of yours) when I found out about the new movie. Why on Earth would you want to remake it? There's nothing wrong with it! What? Oh, it's a prequel? Well, that's kinda different...and yet, after watching them literally back to back, I find they are very much the same.

The NEW Thing starts out at the Norwegian Research Base that was the set piece in the 1982 movie. In other words, when Copper asks, "My God, what happened here?" well, now we get to see it. And see it all.

I won't ruin the film for you. If you liked Carpenter's film, you should go see thig. What I will do is give you a few tidbits to make your mind up for you. The biggest, most important one is this: yes, they use CGI, but it's all based on the design of the 1982 film. In a few cases, it looks deliberately as if they were dialing back the finesse, to better make it match up. This movie is kind of a love note to its predecessor.

I couldn't believe the attention to detail. Everything that we saw the remnants of in 1982, they reverse-engineered into the action of this film. And it is an action film, weirdly. Despite hitting a lot of the same notes, this movie makes a vailiant effort to stay out of the first film's sandbox. This mostly succeeds, but with the snow, the same buildings, the same fashions, as the first movie, the Deja-Vu factor is through the roof.

As I watched the end of the new Thing, I was struck by a realization. In the 1982 version, there's no sequel. We see that coming. No matter what happens next, when spring comes, MacReady and Childs are dead doornails. Trying to get a sequel out of that film would just suck. Too much contrived circumstances. No one would buy it. But...what if someone did make it out of the Norwegian camp? Ahhhh...suddently, there's now a tent-peg to hang a third movie on. And it's okay. I think the ending works, especially as the credits roll. You'll see what I mean.

What the new movie lacks in suspense, it makes up for in being a real monster romp. And it would seem that the thing itself is learning. By the end of the first movie, we can see just as well as the monster that the direct approach didn't work so well. But hiding out...that's the ticket. And so, to the next film we go...

The two movies work great together as chapters in a bigger story. If you're a fan of the first one, you just gotta try the new one out. I don't think you'll be disappointed.
Posted by Mark Finn at 7:07 AM

Wow, we couldn't disagree more about the new movie. I liked the Carpenter vision, but detested this waste of time.

The film was not as bad as I expected, I liked it a little. However, I agree with Devin's statement that his decision on the screenplay by Eric Heisserer is one that reduces stress, eliminating any concerns the stage of the needs.
Sky Remote