Preview Night is Wednesday night, and it is the only real time you have a chance to walk around, unmolested, and actually see stuff. This is especially true if you're an exhibitor, because once the show starts, you're trapped at your booth until they say otherwise. So, as you can imagine, everyone in the room was running hither and thither trying to snap pictures, talk to a creator, or get something signed while they could. 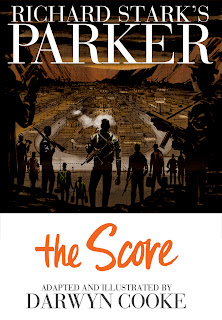 That's how I ended up in line for Darwyn Cooke's newest release from IDW, The Score.  This is the third adaptation of Richard Stark's brilliant crime series featuring the enigmatic and pragmatic Parker. It's possible you don't know what I'm talking about, so get thee over to the excellent website, The Violent World of Parker, and read Darwyn's interview with the guys. It's worth doing.

In any case, I spent about an hour and a half in line to meet the man, and I was one of the last ones actually in line, to boot. The last time I waited that long in a line to meet someone at a convention was Joe Kubert. So, yeah, I don't normally do that kind of thing. I just don't. But it was well worth it to me, just to get a little face time with Darwyn and shake his hand and thank him for doing the book. He drew a little Parker profile in my book, too; it's maybe eleven connected lines and it's perfect.

While in line, I got to have a couple of cool conversations with the two guys on either side of me in the line. You do that at San Diego, a lot. I ran into Joseph McCabe, an old friend and fellow writer. We shot the bull for a while until he was allowed to surreptitiously cut the line with me, and so all was right with the world. Joe was the first of many people I'd run into over the next five days that I've not seen in years.

Between the guys with me in line and Joe, I was almost able to deal with the guy taking photographs of the toys in one of the cases set up by an IDW affiliate. The resin statues were striking and wonderful and expensive, and none of this is in dispute. But this chucklehead with his camera insisted on taking multiple--dozens, really--of photos of each model from every angle he could get at. And between his camera bag, the rig he was shooting with, his haversack, and his constant squatting and shifting, he was completely disrupting the line. It was clear that he had no intention of buying anything, but reacted to anyone trying to work around him as if his picture taking was the most important thing in the world.

Truthfully, I felt sorry for the affiliate creators. They were, from the looks of things, concept artists, and while we were all politely checking out their table stuff as we were trapped into doing so, none of us were there for that. Occasionally some fan would try to wedge his way through us, and we were pretty shitty to them. One guy asked if we were in line for those creators and I replied, "Naw, we're all getting the same tattoo." He laughed, and moved around to the other side. Irritating for all, sure, but by no means the most untenable thing at the convention. Nearly every booth had some kind of traffic flow problem and there wasn't really anything to be done about it. Welcome to San Diego.


Whilst milling around, I also ran into Chris Roberson and Allison Baker, Chris Cox, Martin Thomas, Kerry Gammill, and Shannon Wheeler. It really felt like a family reunion. I forget sometimes how many people I actually know in the comics industry, until I see them all in San Diego.