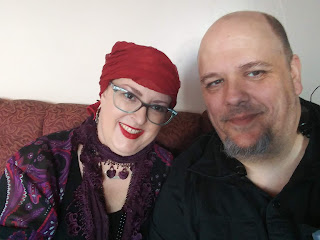 Last week, out of the blue, Cathy’s Oncologist sprang a CT scan on her. This was a surprise because we thought she had two more weeks to go before they would take a picture and look at stuff.

Cathy was, understandably, shaken and excited and nervous and all of that. There were a lot of ways that the results could go, such as “Well, the tumors don’t seem to be responding to the treatment,” or “there’s not much change, I’m afraid.” Or it could be the answer we actually got:

The tumors are shrinking. Every one of them. Her blood counts are good, the markers for tumors in her blood are down by two-thirds. Other spots way down or gone. It’s good news.

Granted, we haven’t heard from the doctor who will perform the surgery, and he’ll be the final arbiter of what constitutes an acceptable amount of shrinkage. It’s almost certain that Cathy has another round or two of chemo while they hem and haw over her CT scans.

But any way you look at it, it’s a win. Cathy got actual confirmation that all of the hell she’s been putting her body through has paid off. The meds are working. The treatment is working. She’s not just spinning her wheels.

We’re going to take a brief pause as we gird our loins for the second leg of the World’s Crappiest Triathlon—the surgery phase. All of that is still up in the air, but it’s a profound relief to know that we are on the other side of the chemo and almost through with this part of the treatment.

Have I mentioned yet how grateful we are? We are. There were a few days where the only thing that kept us going was a card in the mail, or a funny text message or something like that. It only takes a few seconds to be kind, but those few seconds can mean the difference between a good day and a bad day for someone. We thank you all, for every second.