Food poisoning is one of the great equalizers; everyone has at least one instance where they ate something and not long after, it sent their body into open revolt. Of course, there are exceptions to every rule, and I’d like to think that my recent experiences taught me a thing or two. One seldom expects to encounter life wisdom while poised over a toilet, and yet, beggars can’t be choosers. But I’m getting ahead of myself.

Those of you not from Texas probably know all about the storied tourist trap called the Big Texan; it’s been featured in many TV shows and stands as a living, throbbing testament to Texas Excess and all that comes with it. This is one of the many roadside attractions that memorialize the passing of Route 66, an intentional call-back to a bygone era. Their well-publicized signature dish is a 72-ounce sirloin steak and all of the trimmings. If you can finish the entire meal in an hour, it’s on the house.

Even if they didn’t have a steak the size of a hubcap for people to gleefully masticate, the place would still be on the map as the Official Cultural Graveyard of Texas. This is where tourism goes to die. Anything that can hold an image of the Texas flag or any of its composite or ancillary components (a single star, or the distinctive outline of the state, for example) is replicated on a bewildering array of merchandise which is then jacked up to three to five times the normal price, because, you see, everything is bigger in Texas, including con jobs. 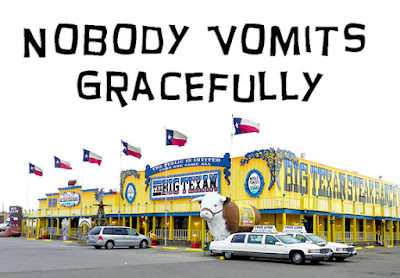 But wait! That’s not all! There’s a shooting gallery, a bar with longhorns over it, plenty of oversized props for taking pictures of yourself in Texas—it’s a big rocking chair, see? I look like a kid! Because everything’s bigger in Texas! Hah!

Assuming you want to thread that gauntlet of kitsch and shit and actually eat in the restaurant, you will be eventually summoned into a massive dining room, bigger than you expect, all decked out in hardwood, corrugated tin, stuffed and mounted animal heads, and horses, cowboy hats, pistols, and on and on and on. It’s a theme restaurant where the theme is “State Jingoism,” but it’s not even really that. It’s stereotyping, the kind of weird-ass ignorance that native Texans sneer at, but don’t really excoriate or condemn.

You are then given a menu by a waitress dressed like Woody’s sister from Toy Story. They will take your order, and you’ll rationalize the prices in your head because and I quote, “You get to keep the boot!” Side note: I am convinced that the Big Texan is where carnival folk go when they enter into 12-step recovery programs. Those quaint motel rooms are where they dry out, and they make minimum wages at the restaurant, in the kitchen, or some other area of the vast enterprise, so they can get their monthly allotment of methadone.

Eventually, your food arrives, and your first thought is, “that looks a little small for the price.” But you eat it because you’re starving and as food goes, it’s not bad, but it’s definitely about three dollars more expensive than it needed to be. But, you realize as you look at the size and scope of the operation, that even if this place does function as a halfway house for recovering circus carnies, they still must have a shit-ton of overhead.

Maybe you’re still hungry after the meal. That’s okay, because there’s one last part of the gauntlet to run and that’s the cakes and ice cream that you can get to-go on the way out. Even frugally, it’s not hard to drop a hundred dollars on two people, unless you’re watching yourself and penny-pinching.

That’s why I ordered the $11 cheeseburger when we sat down to eat. Why, after all that I wrote above, would we do this, you may well be asking. I will break it down for you: the place is really easy to navigate, getting on and off of the highway; they serve steaks and vegetables, which is pretty much all Cathy can eat at the moment; and we know what kind of a place it is, having been there twice before, and so we can avoid the various pitfalls of a newbie.

If there’s a fourth reason, it was that we were making up for having missed both our anniversary and my birthday due to some recent complications with Cathy’s Ongoing Medical Saga. We didn’t know Amarillo well enough to find something else, and we figured we could make good choices in the belly of the beast.

So, back to my cheeseburger: I don’t order weirdly, nor exceptionally, if you know what I mean. I order the number four, or the straight-off-of-the-menu special. If they suggest an option, like “add bacon for a dollar” I sometimes flip that switch. If they mention it. Otherwise, I go for what they have said, in print, that they can produce. Cathy got the smallest steak on the menu and sweet potatoes. None of this should have been difficult for them.

And in Cathy’s case, they rocked it out. Her steak was well-done (not medium rare) but certainly edible. Ditto the sweet potatoes. My fries were overcooked, but I wasn’t really eating those anyway. My burger seemed fine, if a little heavy. The bun was a “sweet” bun, but nothing set off any warning bells. We left the place with cake in hand.

Within thirty minutes, I was bricked up in the guts. Everything was just sitting there. You know what I mean. We made it to our hotel and in short order, I thought going to the bathroom would be a smart and sensible way to spend some time. Suffice to say, I went. Oh, boy, did I go. It was a whole day’s worth of food and travel and get stuff done, and um, yeah, there was a lot of it. It wasn’t horrible. It was just…plentiful.

I got up, feeling much better. My stomach was still full, but I thought, that would pass. Confident that I had solved my problem, I took my blood pressure meds and hit the sack.

Two fifteen in the morning. I am sitting up in bed, and so is the brick in my stomach. Nothing has moved, not for hours. Every burp has that “you’re going to throw up” taste. But why? I thought. I’d already gone to the bathroom. I didn’t eat anything weird. And then I realized something; my sit-down excursion, earlier? That was all of the real food that didn’t make me sick. I was holding on to the cheeseburger. And that could only mean one thing. I took a sip of water, and something clicked. The pump was primed. I made for the bathroom.

It was as if a portal to hell had opened up in my mouth. What came out was insane, and clearly vengeful. This was Lovecraftian eructation, a crawling chaos from which there can be no hope of rescue. In my despair, I cried out to my wife.

These days, Cathy sleeps with her head completely swaddled. She has her turban, and noise canceling headphones that play soothing tones or something, and an eye mask. Cumulatively it’s like being in a sensory-deprivation chamber. From the outside, she looks like Ricardo Montalban on Ceti Alpha V at the beginning of Star Trek: Wrath of Khan.

And yet, few things cut through the veil of sleep like someone in your home throwing up. It’s one of those unmistakable sounds, not really duplicatable by conventional means. She began talking in soothing tones to me, but I suspect all that really did was anger the balrog in my innards.

I vomited all over the bathroom within two seconds of entering it. Knowing that I had a lot more to offer the porcelain arbiter, but not wishing to kneel down in my own puke, I stood on my tip-toes, legs apart, and leaned across the expanse of floor with the toilet almost directly beneath me, bracing myself against the far wall with my outstretched arms. It looked like one of those low-impact exercises they get stroke victims to do so they can get their motor skills back. Not my best look. But it worked. I ralphed all over the bowl, but not myself.

When at last everything had subsided, I pushed off from the wall and took a step back to survey the damage. There was only one thing in my stomach, apparently, and it came from the Big Texan. Cathy said from the bedroom, “Are you okay?”

“You’ve got cancer, and I’m the one puking my guts out” I croaked.

“You’re fine,” she said. “If you can make with the funny stuff, you don’t need my help.” But she got up anyway and got me a wet towel.

I spent the next day dealing with diarrhea so instantaneous, I couldn’t eat anything more substantial than a saltine. Sips of water. Sweats. Aches. Chills. All while driving. I didn’t let Cathy know how bad I really was. I kept cracking jokes and lightly bantering. It wasn’t until we’d reached the motel and I nearly passed out trying to unload the car that she was tipped off.

While wrapped in sheets, shivering, I couldn’t help but flash to a truth: this must be how she feels every day. Her nausea—which hasn’t given way to throwing up, thankfully—it feels like the symptoms I had. With food poisoning. And though we talk about what’s going on with her, there’s a lot she’s not letting me in on.

By the evening, and with the help of a lot of Imodium, I was feeling well enough to drink chicken noodle soup. Food poisoning doesn’t last long, thanks to my cast iron stomach. We managed to salvage a little bit of the weekend, and we certainly achieved our goal of not thinking about surgery or blood clots.

We made a similar trip earlier in the week; a quick run and gun to a college town about three hours drive from where we are in North Texas. That trip was half the time and distance, but we were both miserable. We didn’t click. No connection. We were crabby and snappy for most of the time. I felt bad, because it was my idea to get out of town to take her mind off of things, and it didn’t work one bit.

When Cathy suggested a second trip, two days later, I jumped at the chance. We didn’t talk about it, but we both independently decided to salvage the trip, and we had a blast. It was like vintage Mark and Cathy. Even dealing with the food poisoning. We felt like our old selves again.

There’s nothing like getting out of town to change your perspective, or your outlook, or just to get out of your own head. Driving forces you to be in the here and now. The goal is the journey, not the destination. It’s that change in your surroundings that stimulates your brain, makes you breathe deeply, and blows away those cobwebs. We are going to start doing this more. We need it. And I think you probably do, too. Don’t be afraid to leave your house. Get on your bad motor scooter and ride. Just don’t end up at the Big Texan, if you know what’s good for you.