I'm going to start this with a strange little coincidence. Cathy was moved into the hospice care center in Wichita Falls about ten days ago. They got her in and comfortable and settled and I hung around outside while nurses and orderlies swarmed over her and did stuff.
As I was sitting outside, I noticed the tiles in the building were all donated--you know what I mean, where you pay a certain amount and sponsor an oblong tile in the name of a loved one, or just as a donation from a family or an organization. These tiles (bricks?) run two-up all around the walls, like wainscoting, down every wall and across each doorway. Outside each room, however, there is a larger plaque, presumably reserved for larger donations, or to sponsor a room. Here is the plaque outside of Cathy's room. 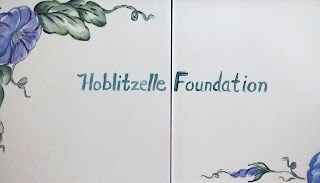 It says "The Hoblitzelle Foundation" for those of you who can't make it out. I read it and a chill ran down my neck. Let me explain why.
Back in the day--like, a hundred years ago--the movie industry in Texas was run by a guy named Karl Hoblitzelle. If you live in a town like Abilene or Austin and it has one of those grand theaters named the Paramount or somesuch, chances are, it was owned by Interstate Theater Company. Hoblitzelle's operation was so big, it drew Hollywood to the Metroplex, and for decades, there were field offices in Dallas for the major studios. Whenever celebrities would go on promotional tours, they would start in D-FW and be driven or flown around to the various Interstate Theaters to smile and wave at the crowd and otherwise press the flesh.

Interstate Theater Company got SO big, in fact, that they were investigated for anti-trust violations in the late fifties and early sixties and forced to sell off pieces of the company to pare down into a respectable size. A lot of theaters were cut loose, to be operated locally, including one of their crown jewels, a theater that they built back in 1953, during the height of the 3-D craze (the first one). Interstate had been one of the only organizations in the country that could afford the installs on the new systems, about ten thousand dollars of 1950s money at the time. In 1952, there were about twelve theaters that could show 3-D movies in Texas, and they were all owned by Interstate. And when one of their assets burnt to the ground in 1952, they rebuilt it six months later, using state-of-the-art fire suppression, and included a cry-room, stereo sound, and of course, 3-D--the first theater in the country to have been built with 3-D installed from the get-go. Italian Terrazzo marble tile,  modern design, and cathedral-like seating...they'd never seen anything like it in Vernon, Texas.

Yep. The Vernon Plaza Theater. The theater we owned, the reason why we came to North Texas. Cathy had been under Hoblitzelle's (former) roof ever since we moved to North Texas. Now, one last time, his philanthropy would shelter her.

There have been ups and downs since Cathy came to the Hospice center. Mostly, it's been playing catch up. They get her stabilized, it's good for a day and a half or so, and then the nausea comes back and they have to monkey around with her meds again. Lather, rinse, repeat.

This weekend, however, the nausea won the race, and she started throwing up again. It was bad. Neither of us got any sleep Friday night. Saturday morning, Cathy okayed them to replace the NG Tube in her nose. You can click through on the link; there are no photos.

Cathy had one in the hospital and she hated it. Who wouldn't? But it helped get all of the gunk out of her stomach. The blockage isn't letting food--liquids--past her large intestine. Everything is backing up into her stomach, where the acid keeps trying to deal with it until it gives up and sends it back the other way.

As soon as she was intubated, she couldn't eat or drink anything; the tube would just suck it up. Not worth doing. So I watched Cathy get weaker and weaker, crunching on ice chips, which was all she could have, for most of Saturday and Sunday. Her NG tube kept pulling gunk out of her stomach. A lot. More than before. It was bad.

The meds they gave her made her sleepy, tamped down her anxiety, and basically knocked her out. She woke up in fits and starts. We had small, brief conversations, in between her begging me to take her home. My heart shattered every time she asked.

It's not likely that she's going to come home.

Sunday night, I made the decision to get her as comfortable as I could. I put on an Office dvd for her, mostly to listen to, as she kept her eyes closed. We got through a couple of episodes, and then she announced she had to go to the bathroom.
The nurses ran in like a Nascar pit crew at Talladega. Cathy did, well, a lot of stuff, sort of all at once, if you know what I mean, and I think you do. The nurses got her cleaned up, and back in her chair, she said, "I want...SPRITE."  She started drinking sprite and water, and while the meds made her a little confused, she finally went to sleep. We both did.

This morning (Monday, July 27th), she woke up and said, "I want...TOAST." The nurses were quick to point out that she couldn't have it, as she was still on the NG tube, and toast would clog the tube right up. I then pointed out to them that her container, which had been dark brown, horrible, and gross, was now filled with clear fluid--like, you know, water and sprite. No trace of brown goo.

The nurses felt Cathy's stomach and not only was it no longer distended, but it was soft, and didn't hurt her to touch it. Over the weekend, it was like she'd eaten a tetherball. Now, it was normal again.
I have learned not to get my hopes up.Every time I do, someone throws a rock at me and I start bleeding all over again. But as of this afternoon, they have clamped her hose off, and given her some clear liquid, and she's had no stomach problems or nausea. That could go away at any time. There's a slight--very slight--chance that the obstruction has opened up enough to let stuff in. It will not last. But for now, Cathy is not in pain. And, fingers crossed, she'll be able to take some soup.

I'm going to be honest with all of you: until this morning, Cathy was not expected to last a week. Now, it's a guessing game. This will certainly buy us some time. How much is anyone's guess. A day? Two? Three? Maybe another week? We have no idea. It's up to the cancer and the bowel obstruction at the moment.

But for the short term, Cathy doesn't have to fight her own body anymore. She may well get to sleep through the night. And I will be able to do the same. Tomorrow may find us back to where we were on Friday. I don't know. They don't know. Cathy doesn't know. There's a whole lot of "don't know" going around at the moment. We are using it to take a few deep breaths and keep our heads down.

If you are praying for us, please don't stop. If you're lighting candles, please light another. If you're throat singing, praying at an altar, or invoking sacred energies, all are welcome in this house. Focus on the bowel obstruction. We can't do anything about the cancer; right now, her large intestine is the villain here. And I am so sorry I haven't had the bandwidth to reply to everyone on social media, but y'all, thank you so much. Those well wishes and comments and personal remembrances and everything else you're sending our way is really getting me through the day. And I'm reading to Cathy when she is able to focus. We love you all. Thank you.
The GoFundMe is still up. I'm only including it because so many have asked what we need help with, and I don't know what to tell anyone anymore. It's going to mostly be bills.
Posted by Mark Finn at 4:58 PM

Ah, Mark! I'm at a loss for words... I'll hope for improvement and for the bowel to unblock!

The correct link for the GoFundMe:
https://www.gofundme.com/f/cathy-day039s-cancer-fight

Good luck, and you both have both our love!
Reco

I can't do much but keep sending good vibes and kicking some money your way. Hugs from Austin. And great story on the plaque -- there's weird serendipity in this old world. Love to you and Cathy, Mark.

Sending all the love. The universe seems to be also.

So many prayers going up! My heart is breaking for you both. Love y'all lots.

So sorry, man. So very sorry

Awwww Mark such a beautiful sad story. Prayers to the two of you and the family. God Bless you Cathy my classmate. 1983

Mark, I am sending you both all the virtual love I can. I have you both in my meditations, sending you all the best wishes for strength and courage and the peace and space to take those deep breaths. And, yes, I am off to light a candle for you both.

The girl next door said...

<3 so good to hear that she is more comfortable right now. Thank you for sharing this with us.

I’ve been praying and wondering how Cathy is doing, so I was relieved to see this post. I’m floored by all she and you have had to deal with In this past months, but God shows up in small miracles, doesn’t he?. It’s amazing that you ended up in that room with that donor’s plaque, That tells me God is present and trying to provide you little rewards. I pray He continues to relieve her stomach blockage and for comfort and moments of joy and love. I pray for a few bites of toast or whatever her heart desires, AND it won’t create issues. God bless and know I may never have met Cathy, but that doesn’t matter. She is my sister, and I pray for the both of you.

Thanks for taking the time to keep us updated. I love you guys. Let me know if there's anything you need.

Hello, Mark. This is just a quick note to say that I am thinking of you both and sending you best wishes of peace and strength.

Mark, I am just now catching up with all of this info! I hate that damn Facebook algorithm, because I never see Cathy’s stuff on my timeline. Please relay to her that Melissa (aka Doralee) is praying for her, and for you. I actually live relatively close to the Hospice of WF, and can drive there within minutes if you need anything!!! ❤️ I vividly remember the rehearsal for 9-5, where Mike asked us all to share a story of how we overcame an obstacle (bad relationship, horrible boss, etc) and she shared about leaving a bad job situation, and finding happiness with you and the theatre. It was a beautiful story of hope and finding true love. Feel free to find me on FB if you need anything.