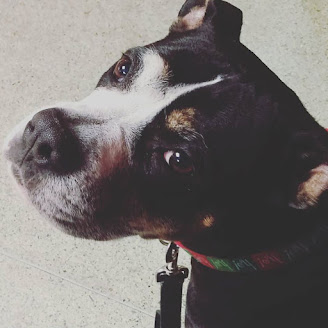 Most long-time readers here will recognize the name of Sonya, our affable pit bull pooch with the winning personality and a bevvy of entertaining tricks. She's ten years old now, and she's lost a little bit of bounce, but only a little. We've been pretty lucky in terms of dog maintenance; she hasn't cost an arm nor a leg, and aside from the occasional itchy eye from high pollen days, she's reasonably healthy.

Last year, we took her to a specialist in Wichita Falls because (and I didn't know this) apparently pit bulls have those big, fleshy mouths that continue to grow as they age. The teeth get covered up by the gums and that's what causes the stinky-mouth, and left untreated, can rot teeth, forcing an extraction. We didn't want that, but Sonya's mouth was definitely in bad shape.

The process is straightforward; they use a laser to cut off the excess tissue and cauterize it. This was a little more than Cathy and I could pull off last year, so we made plans to do it in 2020.

Fast Forward to August, with the world on fire and my life in turmoil. I've got a dog with a stinky mouth, and she's in the dumps because she can't find her human, Cathy, anywhere. I've also got Cathy, pining away for her sweet baby. I've squirreled some money away for Sonya's health needs, and I thought this would be a great way to kill two birds with one stone.

I made the appointment for Sonya with the avowed intention of bringing her by afterward to see Cathy, even if this meant getting up at 6:30 AM to get everything done so I could make the hour-long drive with the dog in tow. And that's what happened; got to the animal hospital, got her admitted, and reminded them what she was there for. The intake person took one quick look in my dog's mouth and then ran out of the room to get the surgeon.

He was a gruff, no nonsense kind of vet. Not a lot of chitchat, but he was very good with Sonya and figured out how to get both of his hands in her mouth with no complications. When he looked at her upper left gum line, he freaked out. She had a growth there, all right, but it wasn't the same as the others in her mouth. This one had, well, essentially, it's like a bone spur on her jaw. And the tissue was impacted around it, and now suddenly, this simple procedure had become major surgery.

They started talking about her teeth, and whether or not I would want to be notified if they have to pull any, and then I had to sign a consent form for the anesthetic, because she could have a problem with it and they wanted me to know it was a risk. Oh, and also, this procedure would take the longest of any others that day. When they found out I'd driven an hour to come in, they graciously bumped Sonya to the top of the schedule. I thanked them, made sure they had my cell so they could call me when everything was done, and I went back to my car and sobbed for five minutes, just big ugly sobs that shook the car.

This was supposed to be so easy. So simple. I was going to do this thing that we'd been trying to get to, and also, bring Cathy her dog for a visit. Now I'm worried sick that complications will arise and I'll have to tell Cathy that her dog died on the operating table. I couldn't fathom how that was going to work.

I drove to a coffee shop, ordered herbal tea, and pretended to read a book. Eventually I got tired of that and was planning on visiting Cathy sans pooch when the phone rang. It was the young woman from the clinic, and thankfully she didn't bury the lead: "Sonya came through with no problems and she's doing great!" I asked about the horrible growth, and she said they were able to remove it, along with the less horrible stuff. She would need extra painkilling meds for a few days, but she was already up and wagging her tail. "She's such a sweetheart," she said.

On the way to pick her up, the surgeon called, and proceeded to overshare what he had to do and what he discovered in the horrible growth. "I saved it," he said, "so you can take a look at it. There was all kinds of stuff in there," he added.

Awesome. Then he said,"She's a great dog, you know. Real sweet disposition."

I assured him that I did know, and I'd be there soon. When they brought me back to the exam room, sure enough, they'd saved the horrible mouth growths for me to admire, and, I dunno, mount over the mantle. I was told they had to use a special tool to remove it from the jaw. I also got the full drill on the medicines she was to take, and how to administer them. She'd be on soft food for ten days, so, for Sonya, that was like Thanksgiving and Christmas all rolled together. Then the vet tech said, "She's such a good girl. So gentle."

For ten years, I've had people tell me what a great dog Sonya is. She's great with kids, adults, other dogs, even cats, and aside from a taste for squirrel, hasn't been any trouble. I've never tired of it, either; it's one of the first things people notice about her. She's got a wonderful, affectionate personality, kind eyes, and just wants to be friends with everyone.

As I was putting her leash back on her, preparing to take her out to the car, a thought lanced my skull for the first time ever, and I felt both idiotic and brilliant at the same time. Of course she's a sweetheart. It makes perfect sense that she'd be gentle and loving and friendly. 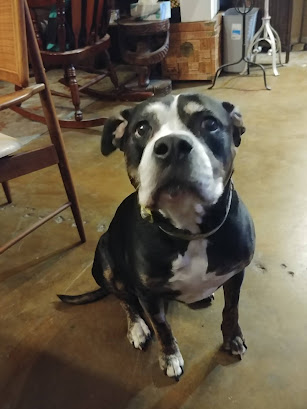 She's Cathy's dog.
Cathy trained her and carried her around for the first six months, and Sonya was Cathy's companion through adventures in gardening, the farmer's markets, daily errands around town, and walking outside when the weather permitted. That dog has a piece of my heart, but she's got a piece of Cathy's soul in her. And, without getting too metaphysical for all of you, I think that's part of what people respond to when Sonya is around.

The visit did not go quite as planned, because Sonya was still groggy from the surgery and all she wanted to do was rest, so after checking to make sure that both of us were in the room, she plopped down on the floor, between us, and took a little siesta.

We'll try another visit next week, when she's more like her old self.

Canine Update: The dog is on the mend, still in some pain, but able to move around without staggering. She's been pampered a lot since coming home, so there's a chance she's milking this for all its worth. That dog is smarter than she looks.

Good thing, too, because I'm docking her allowance until the vet bill is paid off.

I love this. I’m praying for you and Cathy.

Sweet, sweet girl! She is the way she is because BOTH you and Cathy are precious people. Hugs to all of you!!!

Wow, with bone spurs it means she won't have to join the army!

Thanks for this. Glad to hear Sonya came through ok. And I feel your pain on the vet bills. Both our 13 yr olds have gone to the emerfency clinic on weekends w eye issues.

Hi, Mark! I am so glad to hear that Sonya came through. And startled to hear that she is now ten. Um, time flies. Your comment that about her being smarter than she looks made me giggle (so you still have the make-us-laugh gift). (Hmm. Thought about setting up a GoFundMe for the vet bill? She is super cute!)
I have you and Cathy and Sonya in my thoughts. ❤️

This made me smile. While everything else is going crazy, we need the reminder that other parts of your world are happening, too. So glad the surgery went well, and that's so funny that they thought you needed to see everything they took out of her mouth. I'm so glad you were able to ease Sonya's suffering successfully and reunite her with Cathy, even if it was just to take a nap. Sounds like you need one, too.

Jennifer, the GoFundMe for Cathy is still up, so I don’t want to start a second one. The operation was expensive, but nothing I can’t handle. Just, you know, spread out a few months...