You have just got to see this: http://www.facebook.com/Anonymous?sk=wall

For those of you who don't trust to blindly click through on a posted link in a blog, this goes to the FaceBook page created for the movie, Anonymous. In brief, it's the true story of who author's Shakespeare's plays, directed by Roland Emmerich. For those of you who's brains DIDN'T derail at that sentence, I'll break it down for you. 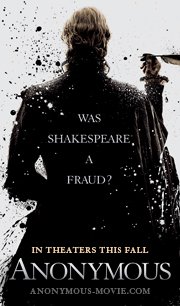 1. "Who wrote Shakespeare's plays" is a debate that is maybe not-quite-as-old as Coke vs. Pepsi, but close, and among academics, just as fiercely debated. At least this fight deals with facts and literary interpretation as opposed to, say, nothing tangible.

2. The idea a "true story" around Shakespeare and his plays is laughable, since there's not really any concensus about any of the above, and especially nothing pertaining to Elizabeth I, and moreover, we're dealing with a movie, one of the most shortcut-taking mediums in storytelling. They can't manage to get details right about a made-up story taken from a book, much less history and literary theory. So, we know going in that this will have as much historical credibility as a John Wayne World War II movie.

So, based on all of the above, you're either really excited about seeing Anonymous, which opens at the end of October, or you're going to smirk and give it a pass (and either wait for the DVD or just rewatch Shakespeare in Love). Either way, what you're probably not going to do is start a balls-to-the-wall FaceBook debate on the movie's page.

You've got to read the Internet Nerd-Rage that these Oxford and Cambridge alumni are throwing on one another. They aren't mad at the movie. They are royally pissed off at each other. And it's a debate that is raging all over the page, teleporting from wall post to wall post like Nightcrawler assaulting the White House in X-Men II.

It's frankly awesome. The righteous indignation, the ad hominim attacks, and the palpable disdain for anyone who isn't them...it reminds me of, oh, I don't know, just about every single one of my friends.

If you've ever had one of these heated debates, go read the Anonymous FaceBook page. That's what we look like when we fight with one another. If you have ever been in one of these debates, it's very hard not to get worked up. After all, there's suddenly, without warning, someone being wrong on the Internet! And what's worse, they are making themselves heard through FaceBook! Why, their wrong-headed and overly-simplifed conclusions could potentially infect...everyone who uses a computer! It's got to be stopped!

I know, it's crazy. And if you're chuckling silently to yourself, thinking "Oh, boy, what geeks! I'd never get that worked up about anything so ridiculous..."

Then allow me to ask you how you feel about Medicare and Social Security. Or the flat tax rate. Or corporate bailouts. Or anything having to to with politics, religion, and society. Did your brain explode? Or did you just shut down completely.

You know, I get it, I really do. Sometimes it's easier to debate about the trivial stuff (relatively speaking; I know that Han shooting first is more akin to scripture) rather than try to wrestle with the big, complicated issues. What's wrong with just saying, "You know what? This is big and complicated and I don't understand it all." But if we get frothing mad about a Roland Emmerich movie, what won't we fight about? Sometimes being scrappy because it's part of our "American character," whatever that means, can become really tedious.
Posted by Mark Finn at 10:39 AM

I liked his Godzilla...

It's easy to laugh at people in their Internet Rage. It's also easy to see, once we step back and take a good look, that We act just as stupid at times as They do.

I am certainly guilty of it.

Oh me too. Especially in the REH arena. Sometimes though it's good to take that step back and go, "Whoa, so that's what I sound like?"

Also: I may have liked Godzilla much more as dumb fun if it had been named ANYTHING else other than Godzilla. If you don't know the history of that particular movie, it's worth checking out for all of the crap that went down over it.

The only internet rage I laugh about is when someone is completely and utterly wrong. Like that girl who demanded Universal apologise for ripping off Twilight in The Wolfman. That kind of rage is delicious.

When it comes to these sorts of debate, though, I do kind of sympathise, even if it's about a subject I don't care about. It is worthwhile looking at them every so often, to keep yourself grounded and remind yourself "it's fandom."

That said, my dislike of Anonymous isn't so much for the Oxford/Stratford controversy, rather the complete disregard for basic history - like having Christopher Marlowe appear at a play several years after he died - and still having the gall to call itself historically accurate. Look, I understand films aren't documentaries, but if you're going to play the historical accuracy card, you can't then go and decide "you know what'd be cool, let's have Elizabeth I's funeral on a frozen Thames" because it'd be "cool." Braveheart and Amadeus didn't set out for historical verisimilitude, so they're more palatable than the likes of King Arthur and The Da Vinci Code.