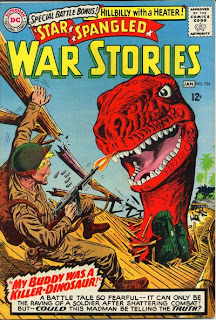 One of my favorite--one of everyone's favorite--artists has left us. Joe Kubert was a Golden Age great who only got better with age. A gifted artist and storyteller, he was generous with his time and talent and he created a body of work that is still vibrant and relevant today.

I got to meet him in 1994, at my first San Diego Comic-Con. This was before it was the giant mega-media-multi-stravaganza that it is now. Back then, you could go there and meet comic book creators. But I digress. I had brought with me a copy of The Great Comic Book Heroes, a hardcover reprint book that featured, among other things, Kubert's work on the Golden Age Hawkman.

He smiled when he saw the book, and I was able to blurt out that he was one of my all time favorite artists. He said, "thank you so much!" and held out his hand for me to shake. I took it and told him thanks for my childhood. The war comics you drew helped me establish a connection with my father that I otherwise wouldn't have had. He said, very sincerely, "You're welcome." And that was that. He shook my hand with the same hand that had drawn some of my favorite comics ever. It still gives me goose bumps to think about it. 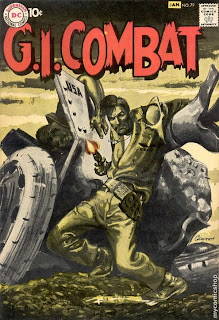 Kubert was one of the first artists I could recognize by style. This is pretty significant at the age of 8 and 9 years old. I could spot a Kubert cover a mile away. Unfortunately, I hadn't yet picked up on the trick of getting a great artist to illustrate a dynamic cover to sell mediocre insides. Well, actually, that's not fair to the stable of great artists who worked on the DC war comics in the sixties and seventies. But when you are expecting Joe Kubert and you get anyone else...it kinda pales in comparison.

I was always attracted to Kubert's lush and vibrant line work. He could be precise when he needed to, drawing tanks and warbirds and M-16s as the story dictated, but his figures in motion, and especially in comics like Tor and Tarzan, were loose and graceful and expressive. He was a masculine artist, but he was also capable of great humanity, a trait that first showed up in his excellent tenure on the DC war comics line and continued with various projects to the day he died. 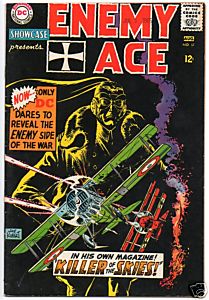 As big a fan as I was of Sgt. Rock, I was an even bigger fan of Enemy Ace. This was something that only Bob Kannigher and Joe Kubert could have pulled off: a World War I flying ace who is so skilled he is known as the "Hammer from Hell" and is as much feared as he is respected by his men. His superiors don't understand him, and so, feeling alone, he wanders out in the woods where he is regularly visited by a large wolf, in whom he confides his conflicted nature about being ordered to kill. Oh yeah, and he's a German.

It's fair to say that those comics, and so many others that Kubert made come to life with his amazing thunderbolt of a right arm, are a big part of what shaped my philosophy on war and conflict. They taught me that there were people, real people, on both sides of the gun, and who they were and how they acted had nothing to do with their political beliefs. As a cover artist, he was one of the greatest ever. Kubert could capture the absolute crux of a story without giving anything away and draw you in and make you want to buy the comic, if only to see how it plays out. I think that many times, his dynamic cover composition trumped the stories he was depicting. Take a look at this cover from Our Army At War. It's one of my all time favorites, and a great example of what I was talking about earlier.

See, these Kannigher and Kubert war comics were always about something else. World War II was the vehicle for telling these stories, but not the reason. They never glorified the war, but they were quick to point out real bravery and valor, wherever it could be found. They also didn't shy away from controversial subject matter--and this was during the Viet Nam war, on top of everything else.

I don't mean to keep going on about the war comics. Kubert could draw anything, and he did, for decades. His Hawkman comics are legendary, as was his run on Tarzan. In the seventies, he started an art school specifically designed to make comic book artists. So many talented people ran through that school: Steve Bissette, Tom Mandrake, Rags Morales, Rick Vietch, Tim Truman, Alex Maleev, Amanda Conner, Steve Lieber, Lee Weeks, and of course, his own sons, Adam and Andy, just to name a few. It's amazing what he did with his time and talent. So many of his graduates are artists I collect and have enjoyed for years. 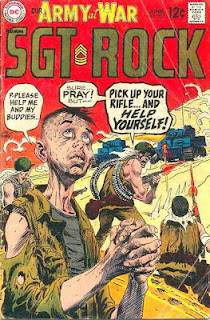 Kubert never stopped drawing. He got picky with his jobs, because he could, but he always returned to certain characters and themes: war, conflict, action, and always, humanity in crisis. In the 1996, he drew the graphic novel, Fax From Sarajevo, a real-time war account of the conflict in Bosnia, taking faxes from his friend and fellow cartoonist, Ervin Rustemagic, and creating somber pictures of the war-torn city and the struggle for survival. Not surprisingly, it won the Eisner and the Harvey for that year.

I never stopped buying his work, never stopped appreciating him. I'm very glad I got the chance to tell him that, but I know I was just one of millions of people over the years who said the same thing or nearly just to him. I also know this: I'm sure he personally thanked, very sincerely, every single one of them, just as he did with me. He was that kind of guy. Supremely talented, tempered with grace and humility. We are the poorer for his passing, all of us--but most especially the comics industry.

Rest in Peace, Joe Kubert. And thank you. For everything.
Posted by Mark Finn at 2:56 AM