What a weird-ass day.

Mondays usually stink on ice to begin with, but there must be something going around. It's as if, in response to the mild relief from the heat wave we've been under in Texas, someone cranked up the crazy to eleven instead. 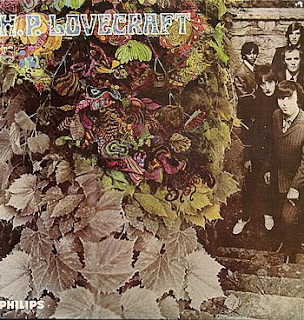 Without even getting into the gawd-awful things coming out of our political hero's mouths right now, we have a confluence of strangeness that I just wanted to briefly remark upon. Today is the birth date of both Robert Plant and H.P. Lovecraft, two primary influences on me in my formative high school years. This got me thinking about what would have happened if you replaced all of the J.R.R. Tolkien references in Led Zeppelin's music with Lovecraft instead. I tried in vain to imagine it, only to quickly remember that there was, in fact, a band called H.P. Lovecraft that kinda sorta covered the ground already (although it must be said, they were nowhere near the band that Led Zeppelin was, as you can well imagine).

And so as we celebrate birthdays, we also have to say goodbye to both Tony Scott and Phyllis Diller, a sentence I never thought I'd have to write in a million years. Apparently Scott (brother of Ridley) took his own life after receiving a terminal cancer diagnosis. Very sad. He directed one of my favorite Tarantino movies, True Romance. During REH Days this year, Paul M. Sammon and I discussed the Scott brothers in some detail.

And what can one say about Phyllis Diller? Marc Maron tweeted that some of his earliest TV comedy memories involved Diller. I think we grew up in the same house. She was a staple of seventies television, so wacky, so out there, and never ever looking or acting her age.  I never quite got her sense of humor, being way too young to understand the implications of hot flashes, but I could see everyone else DID get it, and so I always considered her one of those legends of comedy. She was 95. Can you imagine? And still doing her act. Amazing.

And while I have no interest in getting into what nonsense those empty headed Tulpas are spewing on the campaign trail, I cannot believe the implosion of Weird Tales right now. Here's a link, in case you want to catch up. First off, I thought what Ann Vandermeer did was nothing short of miraculous; she made the magazine relevant again. I know that some of the C.O.M. (Crotchety Old Men) of fandom were bummed that the magazine was being read by people in their 20s and no longer featuring dark, eldritch nonsense. But Hugos are kinda hard to come by, and her tenure on the magazine was the proof in the pudding.

It SEEMED like a good idea to let Marvin Kaye take over the book, promising a "return to greatness," whatever that meant. I mean, Kaye has the historical perspective on the magazine, and surely he won't screw up what Ann did, right?

Oh, hell no. This new review, and this sample chapter, is a fragmentation grenade in a china shop. I don't know if the magazine can come back from this. Certainly, Marvin Kaye cannot. And make no mistake, I think that when it comes to first amendment stuff, people have the right to say (and write) whatever they want. This of course doesn't mean that they SHOULD. It just means that they can. But in this day and age, I think the very last topic I'd want to touch, as a doughy white male, is one of future racial tensions. There may be a way to do such a story that would make it interesting, but the tightrope that the book would have to walk isn't worth the number of people who would assume that it's a racist screed anyway and freak out.

Understand, this is not a defense of the book. That book has every right to exist, just as I have every right to not buy it and read it. Weird Tales, too, for that matter. And even Marvin Kaye, although I would find it harder to think about every editorial choice he chose to make, and why.  But as of 2012, there are few things as intolerable in society at large as the perception of being a racist.  As an author, I should not be limited to what I can write about, provided I can seem credible, knowledgeable, and believable. But in today's Scan and Go culture, where people do not read deeply, and think even less so, the last thing I'd want to do is write a book centered around race right now.

Heaven help me if I ever have a racist character in a story. I'm terrified of having to write dialogue for that character that someone doesn't conflate with how I personally feel about people of color. And once that charge of "racist" is slapped on you, it's impossible to shake. Doesn't matter if you're exonerated and cleared of all charges the very next day, you'll always be "that racist bastard."

This really isn't a defense of the book. But, as wrong-headed as the book is, maybe it should be. I don't know. I wish I had good answers for this stuff.  This stuff never seems to go away, never seems to settle itself. I'm not sure if we as a society can make big, lasting changes anymore, since every twenty-four hours, there's something new and shiny to distract us from thinking clearly and deeply about anything important.

UPDATE: Weird Tales has backed off of the book, and who can blame them. It's a pretty good apology and it might well save them, but I have to say this: nothing should be off-limits in art, provided that the artist is of sufficient skill to demonstrate his or her intent clearly.  Muddy, ambiguous meaning in art of any kind is a failure of that art. If the goal is to evoke an emotional reaction, then it should be--rightly--the emotion you want to evoke, and not a dumb-ass backward happy accident.

I'm no longer involved with the genre, but I'm very glad of the direction Ann VanderMeer took with "Weird Tales", especially considering where the magazine was before that. (A point of consideration: Darrell Schweitzer and Paul Reubens were born on the same exact day, and their birthday comes up next Monday. The difference between the two is that when Pee-Wee jacked off in public, he didn't expect people to pay for the output.) I'd like to think that the resultant mess with the magazine burnishes Ann's reputation, but even bringing her back as editor (hell, making her publisher) couldn't save this iteration of "Weird Tales".

The really sad part? I can think of two groups that will yell the loudest about the current fiasco. The first will be the Cat Piss Men screaming that somehow this was all a result of political correctness, and "you had to read the whole book to understand it." The second? The number of wannabe writers who never looked past the submissions address, and will now cry and moan about how "there goes another valuable market."

Why oh why did I click to an io9 link? I can't stand the well-meaning comments criticizing the fact the Lovecraft "gets a free pass" because he "was a product of his time," arguing that Foyt is also a "product of her time" and that there's no appreciable difference, "because racism still exists." This is, frankly, a disgusting reduction of the very different racial climate of modern times: admitting that the 1930s were FAR worse for black people than the 2010s does not mean "downplaying" the very real problems and issues facing black people today, simply acknowledging that there is a profound difference. (Dammit, I should know better than to read the io9 comments).

Heaven help me if I ever have a racist character in a story. I'm terrified of having to write dialogue for that character that someone doesn't conflate with how I personally feel about people of color. And once that charge of "racist" is slapped on you, it's impossible to shake. Doesn't matter if you're exonerated and cleared of all charges the very next day, you'll always be "that racist bastard."

To be frank, Mark, I think it's a lot bleaker than that: if you are not racist, to be accused of being so is indeed horrible and difficult if not impossible to shake. But if you are racist, then you're going to persist, because there's a whole audience out there who share these views. When someone who isn't inherently, or at least overtly, racist is marched up to the drumhead, it's about as soul-destroying as a person accused of any other heinous crime being wrongly convicted.

When good, honest folk are wrongly convicted, it dominates their lives. When wicked folk are rightly convicted, they just go out and reoffend. Doesn't matter to them, but it matters to the honest. Rehabilitated criminals finally realise the enormity of their crimes, and it colours their whole personality.

Not sure if I'm making sense, but basically "you only have to worry about being called racist if you aren't, for non-racist will cast you into coventry: if you are racist, you have plenty of friends to share this worldview."

I dunno, I'm just thinking of that "With Apologies to Jesse Jackson" episode of South Park. They seem to have the right idea.

OK, so why was Kaye giving space to Foyt to begin with? I'm OK with being controversial, but wasn't she just somebody self-pubbing a first-time novel? It's not like it was To Kill a Mockingbird or even 50 Shades of "Pearly-white."

It seems like being considered racist is an unforgivable thing these days. Sort of like being a Commie was once or NOT being racist was once or thinking the wrong thing about 9-11. I'm already a little suspicious of even justified group-think. I'm doubly suspicious when such judgments are so strongly associated with what someone might have said, as opposed to have done.

The editorial decision was utterly baffling. Save the Pearls is just another crappy self-published novel, while interviews have proved that the author has no personal experience with the topic at hand or even bothered to do any research. This is ripe material for bloggers to point and laugh at, but it didn't belong in the pages of Weird Tales. It's not weird fiction. It's not even "new weird", whatever the heck that is. It's YA soft science fiction. You can't even appeal to tradition as an excuse.

If Marvin Kaye wanted to make the magazine go under as fast as possible, I can't really think of a better way he could have done it.

Yikes! RaceFail 2012. Never being one who could resist rubber-necking at a trainwreck, I went to Amazon and read the excerpt. It really is mind-numbingly bad. It reads like something written by a 16-year old who thinks they're being clever and deep and a little edgy, but they're really just badly using shallow, obvious metaphors and unintentially exploiting existing negative stereotypes.

This kind of thing has been done before by writers far superior to Foyt (like Heinlein) and yet the results have been hit-or-miss. How in the world did she think she could pull off something like this unless she is completely clueless or has a monumentally huge ego? My guess is that it's a combination of the two---at least that's the impression I get from reading her responses on HuffPo.

A liberal white woman from an affluent, privileged South Florida background decides she's going to write the Great American Anti-Racism novel by showing what it would be like if white people were oppressed by black people in future dystopia? What could possible go wrong with that? After all, she's read a few Alice Walker and Toni Morrison novels--she gets it, right? Double-facepalm!