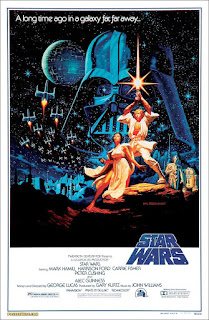 At age seven, I wasn’t clocking movie premieres the way everyone does now. This was 1977, and the only way to find out what was playing at the theaters was to catch a television commercial, read the daily paper, or drive by the theater. Again, I was seven. I was much more concerned with twelve-inch G.I. Joe action figures, my burgeoning interest in movie monsters, and mastering the skateboard as my new means of transportation.

It was my friend Dennis who asked me to go see Star Wars with him. Dennis was my friend who was into science fiction stuff; mostly that meant Star Trek, and if you were really nerdy, Space 1999. I had a bunch of Mego 8” Planet of the Apes action figures. He had a bunch of the Mego 8” Star Trek aliens, including the Mugato space ape. We got along famously, as you can well imagine. So, he said, “Star Wars?” and I said, “I’ll ask.”

It’s hard to recall my very first time watching Star Wars from start to finish. I watched it several times after that in rapid succession, and so those viewings all blur into one blob of feverish wonder and intense curiosity.  But I do remember when I realized I was watching something game-changing. The first half hour of the movie is great, and no one would ever argue otherwise: we had the stormtroopers, Vader’s entrance, the droids on Tatooine, and even the obviously cued and symbolic entrance of Luke and Ben. Oh, of course, the Lightsaber was amazing, but it was ten seconds and then it was turned off. A magic trick.

But as soon as they walk into the Cantina, that’s when you know you’ve left Earth. Up until then, the aliens—the Sandpeople and the Jawas—were just people in cloaks. Maybe shorter than others, but still. It’s not until we get into Mos Eisley that you know you’re not in Kansas anymore.

The cantina sequence, from our party’s first entrance to Han’s flippant exit, was my first most favorite scene ever. It was as if the Don Post Halloween mask ad from the back of Creepy magazine had come to life, and then some. Everything about the scene, from the band playing music that sounded legitimately not-of-this-Earth, to the entrance of Han and Chewbacca, to Ben taking off the guy’s arm with his lightsaber, and all of those short cuts to weird characters drinking, smoking, talking, and otherwise being aliens in a bar, was world-building in its quickest form. This bar was representative of the galaxy, the world we were about to go zooming around in. So simple, and so elegant, but absolutely necessary to the story, and with wonderful implications about what’s in store for us.

Who cares that some of the aliens were off-the-shelf masks? I sure didn’t. For every werewolf in the scene, there’s Hammerhead and Walrus Man (I know, they have names now, but my brain calls them what they were named by Kenner, and I can’t convert), who don’t look like any Don Post mask I’ve ever seen.

And of course, the cantina is where we first meet Han Solo. As movie introductions go, his first scene at the table and the follow-up with Greedo is note-perfect. Anything you need to know about Han can be found in that scene. Cocky, brash, arrogant, worldly, unlucky, cynical, and opportunistic. Luke has an arc, a journey, all through the first movie, but not Han. He pops at the end, under the pressure of the narrative, but right up until that final battle, he’s as mercenary as they come. He was my guy, right from the start.

Dennis and I came out of the theater blown away, like everyone else. He wanted to know all about the space ships. I wanted to build my own lightsaber. All of our other interests got shoved aside as we went back out into the summer of 1977, our eyes opened to this new idea that was Star Wars. My journey had begun. I had taken my first step into a larger world.
Posted by Mark Finn at 1:30 PM