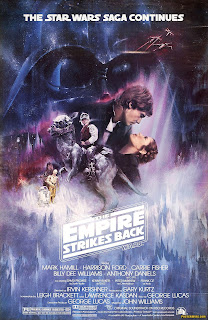 I was ten years old when The Empire Strikes Back came out. This time, there was no missing it, no excuses about not being plugged in. Everyone knew about this movie. The tag line on the television ads was, “The Star Wars saga continues...” and really, that’s all anyone had to say to make us lose our collective minds.

A lot had changed in three years. My parents were now in the midst of a divorce, with all the attendant drama that goes with it. To their credit, they both tried to keep me out of the fight as much as possible, but there was inevitable bleed-through in the form of snarky comments, weird behavior, and strident, whispered conversations with other people, or over the phone.

I was living with my mother. I was given no choice in the matter, and then, as now, I was grateful for not being made to choose. It still sucked, though. My mom’s decision to leave my father was as mundane as it was spectacular, seen from my limited viewpoint, and a lot was asked of me that I now know is just par for the course in any divorce.

Case in point: my mother’s new boyfriend. Paul was a divorcee himself, with two very young children. I have vague memories of him talking to my father on several occasions prior to the split-up. He briefly taught guitar to my mother. He talked photography with my dad. In fact, one of my favorite pictures of Mom and Paul was taken, by my father, during one of their guitar lessons. How's that for nutty? His kids were both enrolled at my mom’s day care center. And they were little, too; 3 and 5. I was, like, twice as old as them, so, you know, they were, like, babies, to me. Pfft. Whatever.

Now, mom and Paul are seeing each other at least twice a week. Sometimes, more. And now I’m trying to figure out how to get along with these two kids. Hillary was five, and a girl, so right away, I was dealing with a Martian. She liked Barbies. I liked G.I. Joes. This was never going to work. Joshua, the three year old, was, at least, a boy. And very prone to suggestion, which is a great trait for a little brother to possess. Hillary worked him like a sheep herding dog, keeping him on task, on track, and more or less corralled at all times. He was quite good at fetching things, as I recall.

I was expected to get along with them. I did this, initially, by staying out of the way.

It was Paul who made the effort. He was, after all, the adult in the relationship. I read a lot, and so did he. We had some common interests, in science fiction and fantasy, and most especially, in movies. When The Empire Strikes Back came out, we went as a “family outing.”  I think this was actually our first movie we watched as a family.

I should say, right up front, that I was glad Han Solo wasn’t killed in the film, and initially very pissed at Super Duper Darth Vader for lying to me. “Ohhhh,” I thought, “yeah, he’s the villain. Maybe he lied on purpose.” Then I realized, as the movie just ended in the middle of the action, no less, that maybe Vader got it wrong, and Han was going to die in the next movie. Son of a bitch! He pulled a bait and switch on me! I scanned the newspaper for a full year in the hopes that Vader would return to the Super Duper, but he never did. Perhaps he suspected he would be called on the carpet for his deliberate untruths.

The Empire Strikes Back. What a mean-sounding title. And everything, from the music, to the tone, was a meaner, more dark, journey into the Star Wars universe.  I was a little ball of negative energy at the time, and so I absorbed this like a cynical sponge. Decades later, I found out that even if your parents weren’t in the middle of a divorce, the movie was good shit.

The banter, the raised stakes, the improved special effects, and oh my God! Luke! Vader! The hand! Boba Fett! Boba Fett! Are you kidding me? The emotions that movie still drags up in me, to this day, are amazing. I was rooting for Han and Leia from the start, all right? And then to yank them apart on the Cloud City Platform with Chewie howling in frustration, and that music playing in the background...

Look: The Empire Strikes Back is still the best Star Wars movie, ever. Period. This is not in dispute. It’s just not. You may think I’m wrong, but I’m not. You’re wrong, and we’ll never agree. And if you tell me it’s not your favorite, I will forever second-guess any movie review or recommendation you give me for the rest of our association. I’m just telling you this up front.

Some of the more layered and nuanced scenes zipped by me. At the age of ten, I was more fascinated by the monsters, the space ships, etc. And for my monster-addled, special-effects-obsessed brain, it didn’t get much better than the ice planet Hoth. By this time, I was a devotee of Ray Harryhausen, and so it should come as no surprise to anyone that I was out of my mind about the tauntauns. Also, the Imperial Walkers, but mostly those furry, bipedal mounts that were obviously and beautifully stop-motion animated for those few, key scenes.

See, back in 1980, that was the apex of movie monster making. If you wanted something to interact with people onscreen, you had to stop motion that that monster. I knew it was expensive, and that’s why so many other movies didn’t use it. But now, here it was in this new Star Wars movie. I was thrilled.

I was awash in emotions and energy. But as we left the theater, Paul asked me, “What did you think?” We started talking about the movie. He liked some of the stuff that I liked. He pointed out some things I missed. We kept up an animated discussion all the way back to Mom’s Day Care Center. As we got out of the car, I asked Josh and Hillary what they thought of the movie. Joshua was bouncing all over the place. I scooped him up on my back and told him I was a tauntaun, and he was Luke Skywalker, and ran around the playground with him on my back and me making noises like the MacDonald’s Hamburglar. He was cool with that.

That was our first shared experience. Paul and I first connected over Star Wars.
Posted by Mark Finn at 8:00 AM