How can you not love that?


Way back in 1985, when Batman was still running around every month, ping-ponging from his own comic to Detective Comics in a two times a month, inter-connected plotline, and breaking in a new Robin named Jason Todd, the idea of a story set ten years in the future, where Batman is retired and Gotham got worse, and Superman sold out, and all of that other Post-Modern, Cold War-colored dystopia that’s crammed into the series, it was a really cool breath of fresh air. A fantastic one-off. A nice vacation from the same-old, same old.

Ten years later, Miller’s nihilistic romp had somehow become the bible for what Batman (and the rest of the DC universe) should be. Dark. Violent. Relentless. Unyielding. Bleak. Bloody. Lots of people point to Watchmen as the culprit, but it’s number three on the list. Watchman is too big, too political, with too many moving parts. Watchmen also had to explain itself, and who everyone was, and why it should even matter.

But Miller’s Dark Knight? Four issues, a quick read, and so very accessible. And it’s Batman, too, which even back in the Dark Ages of the Time Before Comic Book Movies was an easy on-ramp. And being about Batman, a character in whose previous pop culture incarnation had become synonymous with high camp, this generated a lot of ink in the national media, with 99% of the news stories trumpeting a headline that was some variation of “Pow! Zap! Comics Aren’t For Kids Anymore!” It was a great time to be a fan. It was a lousy time to be a fan.

But we were talking about the nihilistic nineties. The Grim-Dark Years. Every new character had the word “blood” or “claw” or “death” in their name. The Comics Code Authority was all but defunct. DC’s own mature readers line, Vertigo, was climbing to its legitimate apex, while the DCU was seemingly business as usual. Except they weren’t.

Kyle Raynor’s (the new new NEW Green Lantern) girlfriend ended up murdered and stuffed into a refrigerator. Sue Dibny, the Elongated Man’s wife (and mystery-solving partner), was murdered by the ex-wife of the Atom. This was after it was revealed that she “took one for the team,” literally being raped by Doctor Light in exchange for him not assaulting the other family members of the Justice League. If that sounds a little fucked up, you are correct. The worst thing you could do in the 1990’s, aside from owning Pearl Jam cds, was to date any super hero from the DCU. It would have been safer if you were shooting heroin into your eyeballs.

This tonal shift wasn’t confined to just DC comics; nearly every large company had mature readers titles, stuff that was aimed at a much older audience, or just a lot of blood and guts. And with the direct market rendering the CCA worthless, why not? Go nuts! Put heads on spikes and let the retailers figure out where to rack it! However, the tonal shift was more acutely seen and felt as it re-colored characters with as much as fifty or more years of historical context, all for the sake of killing a supporting cast member for art’s sake.

In Miller’s Dark Knight, there’s a scene with an old, one-armed Oliver Queen, talking to Bruce Wayne about his upcoming showdown with Superman. It’s an evocative scene, where Oliver makes it implicitly understood that Superman is responsible for the loss of his arm. Cool. In this Elseworlds story, why not? No telling what happened, and that made for a great bit of business. The thing was, we were never supposed to know. It’s better if we let our imaginations take care of it. But by the mid-90s, DC was so desperate to remain, what? Relevant? I don’t know. But they published a story that showed exactly what happened to Oliver Queen’s arm by having Superman rip it off in the monthly comic book.

The story was a hackneyed contrivance, made all the more insulting by removing Superman’s agency. See, if Superman doesn’t rip off Ollie’s arm, then he can’t be mad at him ten years later. It was nonsense, but they were dogmatic in their fetishization of Miller’s Dark Knight, and by this time, also Alan Moore’s one-shot, The Killing Joke. 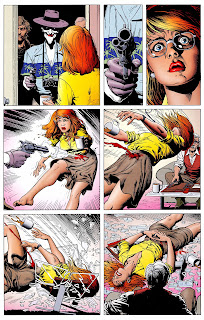 Moore made a career out of tipping over sacred cows, and it was in this particular book that the Joker shoots Barbara Gordon, crippling her with a spinal injury, before taking nude photos of her, bleeding out, to show to a bound and naked Commissioner Gordon. If that sounds grim and dark, yeah, you’re right, it was. And here’s the damnedest thing: had these been left as the one-off stories they were supposed to be, they would have been just as popular, just as meaningful. But when those two books became the style sheet for the DC Universe, well…

We are twenty years removed from the 1990s, and things aren’t much better—though to be fair, the companies have been trying, no one harder than DC, to make some kind of amends. They have re-launched their whole universe, what? Five times, in the last fifteen years? It’s a ridiculous number, especially when you look at the changes they chose to make. And all because Christopher Nolan’s Batman Begins trilogy was a blockbuster success.

I have some hope for the new Bendis reign, but it’s gonna take a lot of solid successes to make me think it’s a real turnaround and not a fluke. I don’t know what Bendis’ take on the DCU is, but here’s mine: these iconic, and in many cases, mythic, figures require their own habitats in order to work. That’s not to say that heroes can’t come to visit, but when they do, they are guest-starring in someone else’s domain; they don’t bring their domain with them. Unless, you know, it’s a really cool story.

Batman works best in Gotham City. He’s built for it. Superman—the Man of Tomorrow—is perfectly suited for Metropolis, the City of the Future. Flash’s Rogues Gallery only makes sense in Central City. Green Lantern is best viewed from space. And so on and so on. And the thing is this: the tone should always match the domain, and by extension, the character within that domain. I don’t want grim-dark Flash stories and more than I want happy, goofy Batman stories. Although—Batman ’66 was genius. But it’s not to be confused ever with the monthly issues of Detective Comics.

The character(s) set the tone of the book. You don’t impose atonal shifts onto characters that are seventy-five years old unless you are subverting an expectation in some way or heightening for effect. In other words, Superman is not grim-dark. He’s not and never should be, unless you’re writing the Elseworlds story that plays Superman against type.

To merge this with yesterday’s post, I want Titans to be Super Sidekicks 90210. Or, you know, something like that. Doom Patrol should be weird and quirky and self-referential, which it manages to do, but I don’t need the scenes of Cliff cheating on his wife. I just don’t. Not as filmed. Watching the first episode of the Doom Patrol looked like some people sat down in a room and said, “If we don’t have F-bombs going off and HBO-style near-porn, the kids are going to tune out.” It seems like a very insecure show, so desperate to be liked and yet, so unlikeable. Doom Patrol is the guy back in high school who always ended up in car with you and your friends, and no one can remember inviting him to come along.

What sucks about all of this is that I want to like these shows, these movies. They got Wonder Woman right and I really enjoyed Aquaman, mostly because I had zero expectations and nothing to lose. Will Shazam! work as well? We’ll find out. It’ll be quite telling if all of the not-Batman and not-Superman stuff ended up being amazing and they can’t seem to pitch a better Batman or Superman story than the ones we’ve already gotten.

Then again, there’s a Joker movie coming to theaters later this year. The trailer makes it look an awful lot like the screenplay was culled from The Killing Joke. So, what do I know?

Titans was originally never intended to be part of the DC Universe app/channel. It was supposed to be broadcast on TNT. The showrunner was Akiva (Oscar-winning crap manufacturer of the screenplay to the Batman&Robin movie) Goldsman. This guy is such a serial killer of movie franchises (among his victims, Stephen King’s The Dark Tower) that there is probably a file on him about 3 feet thick at the FBI’s Behavioral Science Unit. At some point the series started shooting, apparently right up until people started getting an actual look at it. Then TNT took a pass and the show was as orphaned as Dick Grayson. At which Geoff Johns was brought to triage and scavenge what could be saved from the Goldsman footage. The story structure of that entire first season made no sense- ending in a (SPOILER) hypno-dream of Batman gone bad? There are entire episodes of this show that take place in a police station or an abandoned hospital or an old farmhouse and other budget friendly locations. Then look at that “Robin returns to Gotham City” sequence in the final episode. There is more production value spending on Dick Grayson’s cab ride from the airport and walk to his hotel room than any other two of the other regular episodes combined! Nah, I’ll give Titans another chance next season (probably a good idea to give some of these shoes a mulligan on Season One like with Star Trek shows) now that they have hopefully washed all or most the Goldsman stank off. Doom Patrol just about lost me until they showed AVM Man. Now I’m all in. My only gripes are not enough Timothy Dalton and too much Cyborg. But I’m good with it.

Jack,
I didn't know about the Titans complicated history. I may watch the second half of season one (or season two, or whatever they are calling it these days), now that it's been smoothed over. But it's nice to know that my impression of the show wasn't off. It's scrambled eggs.