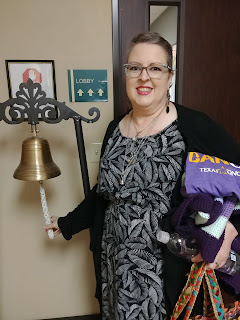 I'm sorry it's been a while since I let you nice people know what's going on in our Saga of Middle-Aged Wellness. It's kind of been a "no news is good news" sort of thing, wherein Cathy was back on chemotherapy, and it was doing a number on her, but it wasn't anything we hadn't dealt with before--just maybe a little more severe, but we were really close to being done with it, so let's just power through to the end and celebrate, right?

Right. Well, sure, if that were all that was going on.

Cathy finished her chemotherapy last week. It was awesome, in that it was a real relief to be out of those woods, but unfortunately, she was too weak to even celebrate properly. However, we did ring the bell at the treatment center. It's a rite of passage, not unlike when you leave Long John Silver's and you're pretty sure you didn't get a food-borne parasite from eating at LJS. Only this is better because you didn't have to eat at LJS to ring the bell.

Next week, Cathy gets a CT scan, and if it's clear, then we are officially Done With Treatment and go into maintenance mode. This means getting blood work done every three months, for at least one or two years. They are very vigilant because of the change of a re-occurrence. Aside from that, we get to go rejoin the adult world.

Or so we thought.


I've been on the mend, as well, doing my daily intake of antibiotics, and going where they tell me to go, and doing what they tell me to do. About two weeks ago, around the time I stopped getting the daily infusions, a funny thing started to happen: my Pokemon Bulbasaur began to shrink. My hoppity hop was noticeably deflating. It was awesome; finally, my body was doing what it was SUPPOSED to do back in late January.

I went in for a CT scan, at the behest of the infectious disease specialist, to see how things looked, and I was shocked to get the news that my abscess was still there, having only decreased slightly. It's got to be a mistake. As of right now, I have a follow-up appointment scheduled with my original surgeon, and I've made sure he has a copy of the scans to look at when he sees me. She has me on 3 different antibiotics for the next two months.

The thing is this: I don't feel sick, at all. I've got zero symptoms from the last time, and in fact, I have physical evidence (Mickey Roarke is turning into Richard Nixon) that things are improving. I don't understand. But getting this news really brought me down. I thought I was doing better. Hell, as far as I can tell, I am. It's a medical mystery.

Good thing I've got all of those seasons of House on DVD. I KNEW they would come in handy one day.

I'll post more later, when I know something concrete. In the meantime, I am keeping the GoFundMe account open, for one simple reason: the bills are coming due, and they don't care. My favorite bill is this one:

When Cathy was admitted to the hospital for pneumonia, they had a second doctor come in and confirm that initial diagnosis in the emergency room--in other words, two doctors agree, and then she's admitted. Okay, I left the room briefly to walk out to the car and get something for Cathy. When I walked back in, this second doctor was saying to Cathy, "Yep, you just earned yourself a stay in the hospital." He then walked out.

He'd come into the room when I was gone, talked to Cathy, and walked out. Five minutes, tops.

We just got a bill from him. For $1,500 dollars. Oh, and get this: it was the first bill we ever got from him, and you know what? It came from a collection agency. I could not be more mad about this if I were suddenly set on fire. No warning, no hint, no letter, just boom, pay this or my office tanks your credit. Granted, for us, that's like capsizing a canoe, but still! This guy apparently is a sub-contractor at the hospital, and why he's not privy to the benefits of insurance is a complete mystery to me. But if this is his deal, he should wear an orange vest over his scrubs that says, "Contract Doctor" and his rates underneath, like how Taxis list fares: 1,000 for the initial diagnosis, and 100 dollars per minute after that. That way, if your insurance is shitty, i.e. if you live in Texas, then you can see this guy coming and wave him off. "No thanks, I'm waiting for the Blue Cross guy to come around. We'll catch you next time."

I guess we still have our sense of humor. That's something, right?

Insurance is a beast. Cancer sucks. But people are awesome, and we love you so much for your support and encouragement. Here's the link. Please share it if you can.
Posted by Mark Finn at 1:00 PM

I have seen that hospitals will sometimes work with you on bills. It takes effort and the last thing a person with some sickness wants to do is put out that effort. But we have managed to get some relief here and there over the years. Hoping all will go well.

Mostly, it's been okay re: hospitals and billing. This one came out of the blue.

Good to hear about Cathy, hopefully the future will be bright. On your stuff...maybe the CT scan is picking up scar tissue?

The current wisdom is that it's a "pocket of sterile fluid" that the antibiotics should clear up. So...there's that. But I'm no longer the world's shittiest cyborg. So, there's that.

If it isn't the best option, "pocket of sterile fluid" is surely in the top three.